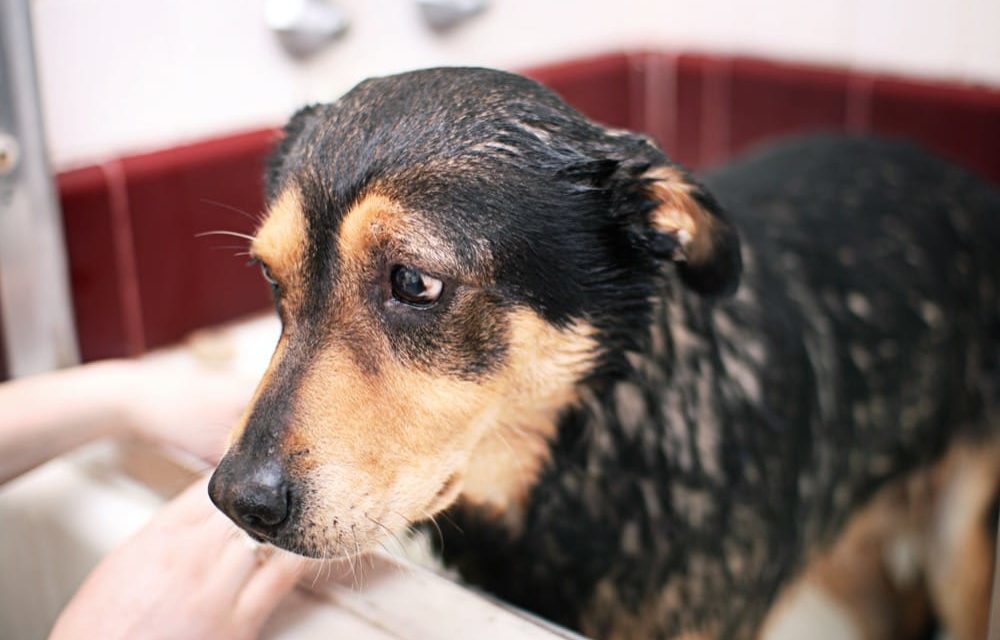 Charlotte-area couple Rob and Megan Hoover were frustrated with the dirty chore of giving their dogs a bath, so they invented K9 Bath Buddy. Simply smear peanut butter or some other treat your dog likes on the Bath Buddy, affix the patent-pending device to the wall of the bath with the help of the attached suction cup device, and the dog is happily distracted while you wash him or her.

In their day jobs, Rob is a marketing director for a beverage company; Megan is an IT support specialist. “Our idea of date night for the past few months has been printing invoices and fulfilling orders,” Rob jokes.

The product sells on the Bath Buddy website and on Amazon, with Rob and Megan in ongoing talks with several retailers. Inventors Digest regular contributor Edith G. Tolchin, a former longtime cat owner, learned about the innovation on Facebook. She interviewed Rob and Megan about how they launched their first invention and the exciting possibilities ahead.

How did your invention come about?

Rob: We have two dogs, Gia and Napoleon, and we struggled with them when it comes to bath time. We stumbled across a video on social media of a dog owner who solved the problem of difficult dog bath times by smearing peanut butter directly onto the shower wall to distract the dog while getting a bath. We thought the idea was great, but the execution could be improved.

We wanted something that allowed the use of peanut butter as a distraction but would be a bit more sanitary (bath walls typically have bacteria, soap scum and more) and easy to clean up. So we just looked at each other after watching the video and said, “Let’s do this.”

If a dog doesn’t like peanut butter or can’t have it, what other food can be used?

Megan Hoover: We have heard from some of our customers that peanut butter isn’t an option for them for several reasons. One, some people have peanut allergies and cannot be near peanut butter. Two, some dogs just don’t like peanut butter. But there are lots of other options besides peanut butter. For example, we use pumpkin purée (mixed with a little coconut oil to be extra healthy) sometimes instead of peanut butter.

But truly, any spreadable dog-friendly food will work with Bath Buddy. (The couple note to avoid any foods that contain the sweetener xylitol. Most major brands of peanut butter do not use xylitol in their products, but check to make sure.)

How did you make your prototypes, and how many did it take?

Rob: Because we were new to all of this, we had no idea what to do. We got all of our materials from the local craft store, cleared off our kitchen counter, and made several attempts—three to four—to get a mock-up of what we envisioned in our minds. We started with modeling clay, but that failed miserably. Then we tried casting and molding, but that failed just as badly. We ended up using foam board and pieces of a baby toy to create the first prototype. My history of tinkering came in handy here.

I assume the product is made of silicone rubber. How are you handling the manufacturing?

Rob: We have a wonderful manufacturing partner overseas in Hong Kong that specializes in silicone baby products, and they were very helpful in helping us bring this idea to reality. Before this, we had no idea about the ins and outs of working with overseas manufacturers and certainly had no experience with the silicone industry.

Have you encountered any obstacles in product development?

Rob: Luckily this process was super smooth, and having a great manufacturer played a big part.  It’s hard to believe, but our first round of samples was exactly what we wanted so there was no back-and-forth between us and our manufacturer to make changes. If we ever invent something else, we are pretty sure it won’t be that easy again.

Have you used any crowdfunding sites?

Rob: We ran a successful Kickstarter campaign earlier this year that doubled our funding goal. We got off to a relatively decent start thanks to a boost from our friends and family, and we could see early on that we would probably finish the campaign right about where we needed to be.

With three days left in the campaign, a large media outlet that I had reached out to weeks before did a feature on us without us even knowing. We started seeing pledges coming in at a rapid pace—much faster than we had seen since we launched—but we had no idea why. It wasn’t until we were tagged in a post on Facebook mentioning that article that we were able to figure out the sudden jump in pledges. We doubled our goal in the last three days (totaling $6,711), thanks to that featured article.

But that presented us with a new challenge: The inquiries and pledges were pouring in, and we knew we couldn’t just end the campaign and lose the momentum we had from the article. So we scrambled to get our website finished and ready to go, so that as soon as the Kickstarter campaign ended we could direct all traffic to the website. We literally had the website ready to go two hours before the Kickstarter campaign ended. Talk about a close call!

How is the product packaged and sold? Who designed your logo?

Rob: We currently ship our products directly to our customers in custom-branded poly mailers.  We do our best to personally write a “thank you” to each customer on our packaging insert that ships with each Bath Buddy. We make it a point to reply to every single website message, email and social media message we get. One of our favorite things that has come out of this is talking with our customers—people who we don’t even know personally, but we feel like we know them because they believe in us, our mission and our product.

When we go into retail, we have retail-specific packaging. Our logo was created by a graphic designer who took a sketch that Megan drew and brought it to life.

Do you have any plans to increase your product line?

Rob: We have received a lot of feedback from our wonderful customers on other products that they would like to see. So yes, we certainly have plans to add new products to our lineup.  Creating Bath Buddy has been so much fun, and we look forward to repeating the process as often as we can with new products.

Before Bath Buddy, who was responsible for Gia and Napoleon’s bath time?

Megan: I am always the one giving Gia and Napoleon a bath. Now, before we came up with Bath Buddy, getting them TO the tub was a team effort. Rob and I both would have to trick them, corral them, carry them and do whatever it took to get them in the tub. But after that, bath time was all me.

Any encouragement for novice inventors?

Rob: You don’t want to be that person who looks back on your life and thinks, “What if?” So if you have an idea, just go for it. Take that first step and get the ball rolling. Sketch it out, start making a rough prototype, anything you need to do to get the idea out of your head and into your hands!