A Bionic Cat & Other Bright Ideas 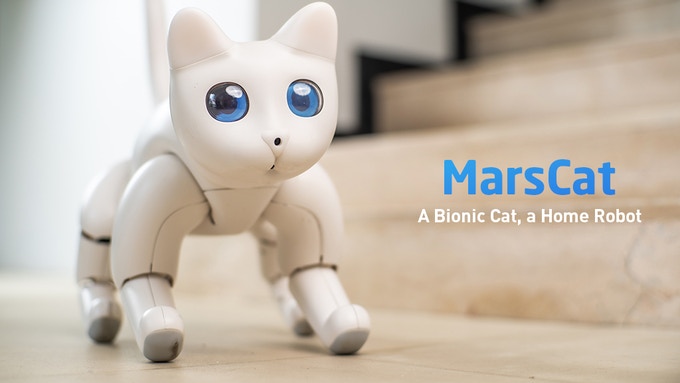 All invention and progress comes from finding a link between two ideas that have never met.
—Theodore Zeldin

GripDockIt can be used at home or on the go, without having to remove the PopSocket on the back of your phone.
It comes in two versions: a desktop charger and a car charger. The desktop version can be used on any flat surface; the car charger, which simultaneously holds or mounts any phone while charging it wirelessly, comes with attachment options to mount the phone for easy charging.

If the user doesn’t have a PopSocket, the GripDockIt desktop charger works like any other wireless charger. The desktop charger also has a light that indicates when charging is taking place.
GripDockIt’s planned retail price is $62, with shipping for crowdfunding Rewards backers in December.

Billed as the world’s first robotic pet cat, MarsCat is fully autonomous with no extra instruction needed to control its movements.
The robot is fully responsive and has sensitive interactions. It can feel your touch, hear your voice, see your face and play with toys. With 16 servo motors, MarsCat walks, runs, sleeps, sits, stretches, bites nails, kneads and even buries litter without producing any waste.

Each MarsCat is unique—its eyes, body and personality. Its personality will change according to the way you pet it. With quad-core Raspberry PI, you can program it and give it many possibilities.
MarsCat has a manufacturer’s suggested retail price of $1,300. Shipping for Rewards backers begins in July.

Built by designers, engineers and cat behaviorists, Cove is an alternative to the traditional unattractive litter box.
The box is made with a thick, slightly textured, double-walled matte plastic. It comes with an integrated scoop, dustpan and handbrush that fit into an accessible top compartment.

Unlike many litter boxes, Cove’s shape is simple and open with no unnecessary bends or hard-to-get-to corners. This makes it easy to clean.

Box dimensions are 22-by-16-by-6 inches, which works for all but very large cats.

Cove has a manufacturer’s suggested retail price of $149. Shipping for Rewards backers starts in July.

The T2 is a portable, on-demand, multi-mode device that replaces free weights, cable machines, suspension trainers and more—with no plates, bands or pins to change. It allows you to perform hundreds of exercises.

The core of the device is patented force lock resistance housing that is not a pulley but a force multiplier. The housing has no moving parts but multiplies your resistive effort to increase results.

The T2 Iso-Trainer plus the gym app with basic access has a planned retail price of $200. The Pro Package 1 with an app that has premium unrestricted access will sell for about $230, the Pro Package 2 for $250. Shipping for Rewards backers starts in April.