A Calm With ‘Wow’ 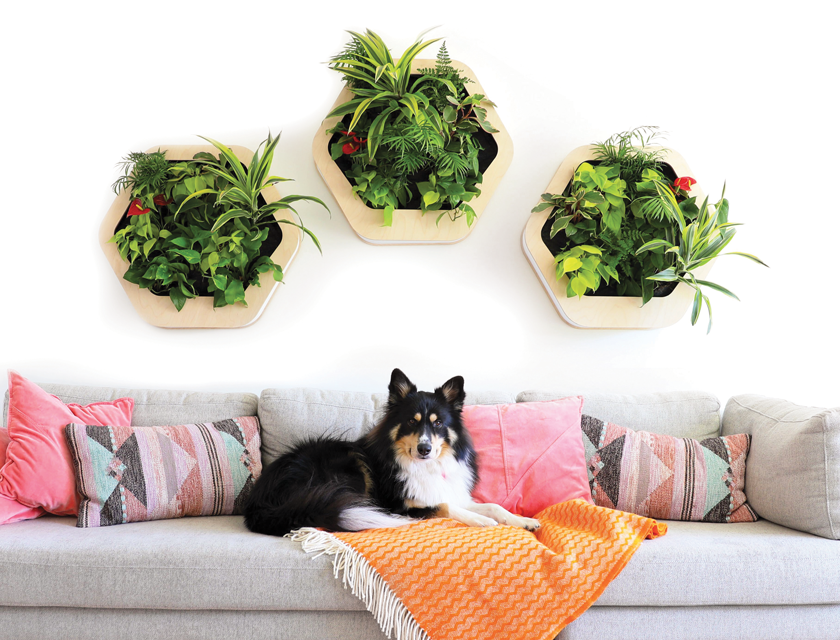 “I saw these amazing vertical gardens in Europe … a way to bring greenery into urban areas that I hadn’t seen anywhere in the world.”

David Brenner can thank his grandparents for ultimately inspiring his “wow moment”—and a calling that brings the peace and joy of nature indoors.

From an early age, Brenner developed a passion for plants and realized how they can nurture the soul. He was tasked with caring for his grandparents’ garden when they went to visit their native Italy.

“I understood the therapeutic effects of plants just watering my grandfather’s cymbidiums,” he says.

Brenner went on to study horticulture at California Polytechnic and spent time at the Royal Botanic Gardens, Kew in London. There, he studied epiphytic plants (those that grow on tree branches), including orchids.

He saw how vertical gardens were incorporated into urban spaces and realized this was his calling.

“I saw these amazing vertical gardens in Europe, and it was like something that was totally new. It was a way to bring greenery into urban areas that I hadn’t seen anywhere in the world. It was that ‘wow’ moment for me.”

Maxing out a movement

That moment—helped by changes to our lives indoors brought by COVID-19—resulted in Gromeo, a living wall system/vertical gardening planter for home use.

Now more than ever, more people are spending most of their time living indoors and away from the natural world. Enter a movement called vertical gardening, which brings nature into indoor spaces.

Brenner’s planter leverages the movement in a uniquely innovative way.

Featuring a pleasing hexagonal shape made from wood, Gromeo  uses a combination of soil and hydroponic watering methodology to keep plants growing strong. The plants are placed inside pockets in the wall of the planter in a specially designed material called Growtex—made from recycled water bottles—that wicks water to the plants to keep them watered and healthy.

The device has no plumbing or electronics, so it can be placed anywhere. It comes with a template for easy mounting.

Gromeo systems can be purchased with specially curated plant packages that are chosen specifically for their beauty and tuned to grow in a given user’s light conditions. They come ready to hang. The standard model holds eight plants; the mini holds four.

After returning to California from Europe, Brenner began creating vertical gardens in the United States. He created a company called Habitat Horticulture in 2009 and developed the vertical garden technology he used to create installations at major firms and public spaces including Facebook, Tesla, design and consulting firm IDEO and the San Francisco Museum of Modern Art.

With 10 years of creating large-scale vertical gardens and the onset of COVID-19, Brenner brought his technology into the home.

He had been toying with prototypes of a miniature plant wall, but it was a back-burner project to his core installations. However, as people retreated from the workplace and public spaces, he started to worry that contracts for these installations would dry up.

He accelerated development. After about three months of focus, he was able to launch the product.

The design philosophy for Gromeo has always been simplicity: “I am kind of sick of being on your phone with apps, and you don’t really need it,” he says.

Brenner decided on the hexagonal shape that evokes nature in the form of a honeycomb, with the intention of creating a living, analog art piece. He used his custom Growtex material to provide the structure and wicking properties he knew plants needed, and created custom plant pallets to help people decorate any space regardless of light levels.

He has focused on getting a beautiful product to market quickly, leveraging his expertise and reputation in installation size vertical gardens to help drive sales.

Gromeo is manufactured at the San Francisco-based Habitat Horticulture facility. Brenner already had a building full of equipment to build the parts and pieces for full-scale vertical gardens, so he designed Gromeo to use the existing equipment.

The plants are all grown in California, too. Brenner works with nurseries to source the plants he needs before bringing mature specimens to his on-site greenhouse to prepare them for shipping with Gromeo devices.

Although only in the marketplace since late 2020, Gromeo has been a hit with consumers. Demand for the product and consumer feedback is pushing Brenner to make new variations; he plans to create vertical gardens with different shapes and finishes.

He is also planning to add some digital intelligence to the device by adding a sensor that will create an audible alert when the device needs more water. There is also a custom lighting solution in the works for people who do not have enough light in their growspace for even the lowest-light plant offerings, to expand the reach of Gromeo planters for everyone.