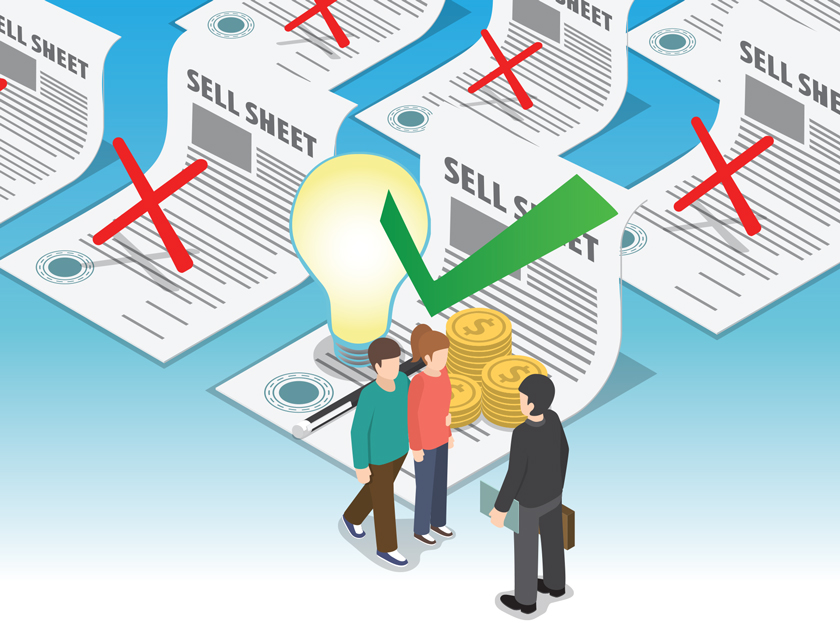 Those seeking a licensing deal should keep it simple, show the big benefit

I’ve seen thousands of sell sheets over the years, and I would say that 90 percent of them don’t do the product any favors.

If you’re associated with inventing, I’m sure you’ve heard the term “sell sheet.” More than likely, you’ve put together a sell sheet for one of your products.

And if you’re in the licensing game more specifically—or looking to get into it—you should learn as much as you can about making a great sell sheet. Because if you’re looking to license, you’ll definitely need one (and/or video sell sheet).

I’m here to help demystify sell sheets for you with some tips and tricks that will help you make them better and hopefully, license more products.

The truth is that most sell sheets aren’t that good. I’ve seen thousands of them over the years, and I would say that 90 percent of them don’t do the product any favors.

I think part of the reason so many sell sheets aren’t effective is that most Inventors don’t really understand the goal, which is far simpler than most Inventors think.

The goal is not to tell share every single thing there is to know about the product. The goal is simply to intrigue potential licensees enough so that they want to learn more about it.

That’s right; no one has ever licensed a product from a sell sheet alone (well, as far as I know, at least). You just want to encourage questions and a conversation.

How do you do that? Instead of telling them everything there is to know about your product, just show the big benefit. And they’ll get it.

So, what makes a killer sell sheet? I’ve broken it down into four easily digestible elements. Nail these, and you’ll be one step closer to that licensing deal.

You really don’t need to come up with a product name (I’ve seen plenty of people sign licensing deals without coming up with a name, based solely on the strength of the product or the benefit it provides). That said, I like to come up with a good name. It’s part of the creative process for me.

A specific example comes to mind with someone I was coaching. Her product was a window seat for your pet.

At first, she was manufacturing herself and selling it online and in local pet retailers. At a certain point, she decided she didn’t want to manufacture and sell, so she wanted to try the licensing route.

The product was called “Lucinda’s Lookout (name changed to protect the innocent … feline).” She had a cat named Lucinda so wanted to honor her cat with that name. That’s a nice thought, but when trying to license, nobody knows or cares who Lucinda is.

So we changed the product’s name to something more easily understandable. We called it the “Pet Window Seat.”

I spend a lot of time on this because it’s really important. Sometimes it comes to me quickly, and sometimes it takes a while.

So, what makes a strong one-sentence benefit statement? For me, it’s a phrase that nails the key benefit of the product and can’t be used for any other product on the market. Plus, the best ones tend to put an image in the reader’s/viewer’s mind, so they can actually visualize the product and benefit.

Let’s go back to Lucinda and the newly named Pet Window Seat. Her original benefit statement was, “designed for savvy dogs and cats who appreciate the finest in comfort, style and a fantastic view!”

We changed it to “Give your pet the best seat in the house.” Together with the name, you get what the product is. Now throw in the killer images she had, and you can see why she was able to license the product much quicker with this new wording.

As much as possible, try to focus on the product benefits. You can also talk about any great features here, but generally speaking, saying something is machine washable isn’t something that needs to be said (unless it’s really unique or surprising).

If there’s more than one benefit, here’s where you would add that. This can be accomplished via bullet points, or as text scattered throughout the document. There’s no one formula for this.

Remember, you’re not looking to tell them how many come in a carton, what it weighs, or that they may come in packs of two. Don’t talk to them in your copy like they’re a manufacturer or a retailer; if you’re trying to license to them, speak to them like they’re the customer.

One thing to keep in mind for the copy: Less is more. So many inventors want to tell everything.

Don’t feel the need to add things because you think you don’t have enough text. If the product benefit(s) is clear and they get it without too much text, go with that.

The best sell sheets are like a great advertisement, so tons of copy is not always necessary.

They are important. But to be honest, this one’s a little tricky.

There are so many image options. You may stress over getting the perfect image or images with your prototype.

But that may not always be the best option, especially if the prototype is kind of rough. In that case, you might be better off getting something Photoshopped—or in some cases, using a line drawing (like those in a patent) might be the best option.

With images, sometimes you won’t know until you see it. That’s often how it works for me. I might think something will look good, and then I see it and have to change it up.

But if you can show the product being used and the benefit in action, that is always the goal. Sometimes you can’t, and you have to figure out how to make the images and the words work well together to tell the story.

Also, try to show credibility. If you have a particular reason for inventing the product—such as you’re an emergency room nurse and you’ve developed something that stops bleeding twice as fast—that’s relevant and will get the potential licensee to take you even more seriously. So make sure you indicate that in the sell sheet.

Look at your sell sheet. If inventing is a movie, the sell sheet is the trailer. It gives you just enough to whet your appetite and after seeing it, you get it … and you’ll know if you want to see the whole movie.