Your Aha Moment May Be Coming 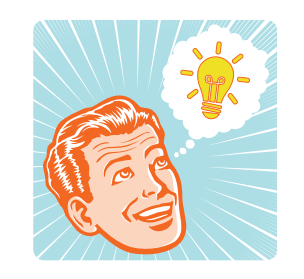 Have you ever had that “light-bulb moment” when suddenly, you see the solution to a problem? Whether you’re an inventor or not, this is also called an “aha moment,” which the Merriam-Webster Dictionary defines as “a moment of sudden realization, inspiration, insight, recognition, or comprehension.”

Henry Ford described this phenomenon: “The air is full of ideas. They are knocking you in the head all the time. You only have to know what you want, then forget it, and go about your business. Suddenly, the idea will come through. It was there all the time.”

Timing can be Random

In terms of timing, “aha moments” are on their own schedule. You may wake up in the middle of the night to tell your sleeping partner that you just got a brilliant idea—only to be told to go back to sleep and talk about it in the morning. Albert Einstein said: “Why is it I always get my best ideas while shaving?” J.K. Rowling, British novelist best known as the author of the Harry Potter fantasy series, conceived the concept while on a delayed train from Manchester to London in 1990.

Probably the earliest documented example of an aha moment occurred around 250 B.C. when Archimedes, the most famous mathematician and inventor in ancient Greece, was in the bathtub.

As the story goes, he was asked by the king to determine whether a crown was pure gold. During a subsequent trip to a public bath, Archimedes noted that water was displaced when his body sank into the bath, and particularly that the volume of water displaced equaled the volume of his body immersed in the water. Having discovered how to measure the volume of an irregular object, and conceiving of a method to solve the king’s problem, Archimedes allegedly leaped out of the tub and ran home naked, shouting “Eureka!” (I have found it). Hence the origin of the term “eureka moment” or the aha moment.

One night in 1902, young American engineer Willis Carrier was waiting for a train, watching fog roll in across the platform, when he had a sudden flash of insight. Specifically, he could exploit the principle of fog to cool buildings. As is well documented, he patented the idea and made a fortune.

One wonders how many aha or eureka moments might have occurred relative to “The best 25 inventions of 2016,” reported in the Nov. 28/Dec. 5 issue of Time magazine. Among those:

• A new design for home roof solar panels called the Solar Roof. It involves a series of tiles designed to blend together and not stick out.

• Tires that spin in every direction based on Goodyear’s new spherical concept tire that would allow cars to move in many new directions, including sideways into a parallel parking space and at specific angles and speeds to counteract slippery surfaces.

• The ultimate alarm clock that, in conjunction with its companion pillow sensor, could monitor your sleep cycles and wake you when you’re least likely to feel groggy.

• A new line of cannabis vaporizer pens that could replace pills. When inhaled, the pens dispose a dose of cannabis oil that has been chemically engineered to make people feel calm, sleepy, or relieved of pain without getting high.

• A newly designed state-of-the-art drone called Mavic Pro that includes obstacle-avoidance technology, a 4K camera, the ability to track subjects while flying. It can also fold down to the size of a loaf of bread.

• A prosthetic arm called IKO that is designed to enable children who have lost a limb to play by using toy-like attachments.

• A new Nike product, Nike HyperAdapt 1.0, for shoes that tie themselves. When wearers press a button near the tongue, the shoe automatically ties or loosens around the foot.

• A new James Dyson product called the Supersonic hair dryer, which uses a tiny, jet-engine-like motor that makes it ultrasonic and therefore inaudible to the human ear.

Time also recently referenced a potential aha moment opportunity, reporting that the National Aeronautics and Space Administration is offering a $30,000 reward to whoever devises a replacement for diapers so astronauts can eliminate body waste hands-free during space missions. Any light-bulb ideas for that one?

It’s what you do with these aha or light-bulb moments that count. Nolan Bushnell, often called the father of the video game industry, said: “Everyone who’s ever taken a shower has had an idea. It’s the person who gets out of the shower, dries off and does something about it who makes a difference.”