An All-Clear for the Ages 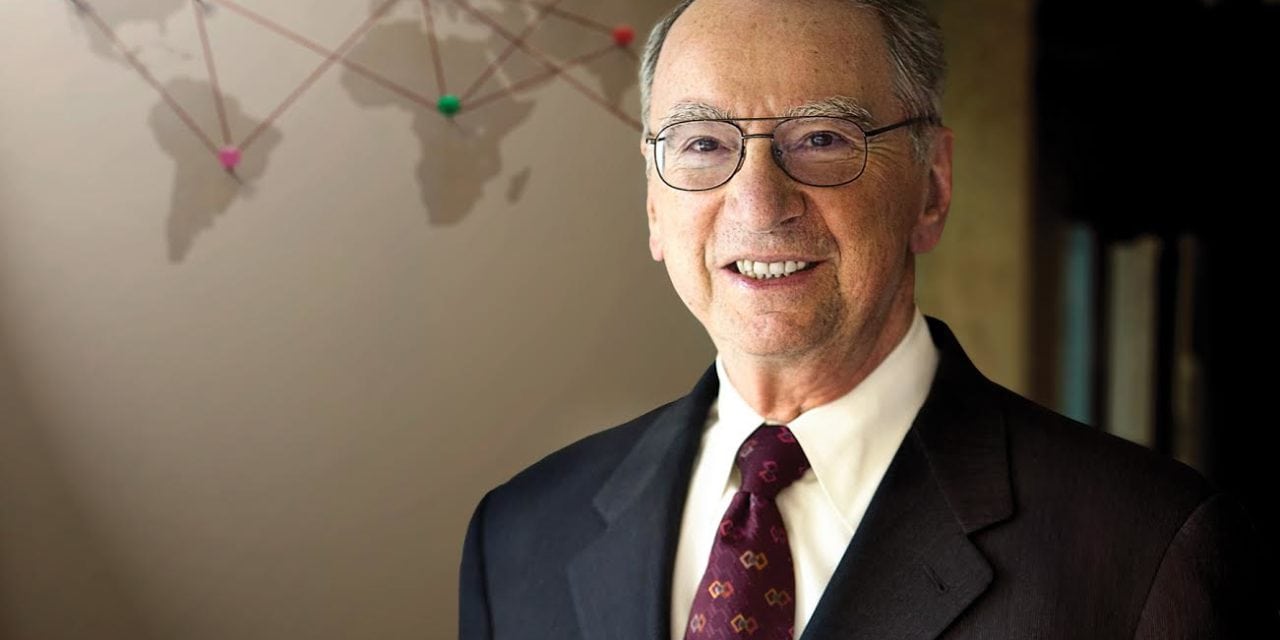 They urged him to wait, but he sensed he was running out of time. Within months Dr. Irwin Jacobs stood before more than 100 mobile technology executives, calmly ad-libbing for his company’s life, time bearing down on him anew in a way he never could have imagined.

It was 1989. The future had arrived. Cell phone technology was the hottest thing since television, with companies building towers as quickly as they could—though the phones were a decade or so away from becoming commonplace. Earlier that year, the industry abandoned analog technology for digital transmission via time-division multiple access (TDMA), an upgraded format that assigns each call a certain portion of time on a designated frequency.

Dr. Jacobs, already an engineer of outstanding accomplishment who four years earlier had founded a company called Qualcomm with six other people in the den of his San Diego-area home, felt he had a better idea. Code Division Multiple Access, a technology invented by actress Hedy Lamarr and George Antheil in the 1940s and used for secure military communications, would allow multiple conversations to share the same frequencies simultaneously. Not only would this network serve more users, it would require fewer towers.

Qualcomm was pinning its hopes on CDMA, but TDMA was fast gaining acceptance as a dominant mobile technology. Dr. Jacobs felt it imperative that CDMA gain acceptance in the industry by the end of the year. So even though the vast majority of engineers he consulted warned against it, he decided to conduct a mass demonstration of CDMA with PacTel Cellular during which industry executives would ride around in a van and make phone calls to prove the technology’s effectiveness. He mailed invitations, and Qualcomm urgently planned for the November 7 presentation.

All systems were “go” on Demo Day: Qualcomm had installed CDMA equipment on two cellphone towers and in a van. Dr. Jacobs was at the podium to deliver what were to be some brief remarks about the technology, anticipating the demonstrations that would transform Qualcomm and change the face of mass communication forever.

Then he saw one of his engineers frantically waving and gesturing at him from the back of the room.

The signal was to keep talking. Obviously, something had gone wrong with the demonstration equipment.

Instantly, Dr. Jacobs summoned his ability to quickly assess a new set of circumstances and respond calmly. He had to think of a way to stall for time. Some off-the-cuff jokes? The old soft shoe?

“Nooooo,” he emphasized with a laugh during a June interview with Inventors Digest. Drawing on his speaking experience as a former professor at University of California, San Diego, “I went into a more in-depth discussion of how we had overcome some of the difficulties with CDMA. Previously, we had given them some information on CDMA. So, Pac Tel Cellular talked about the need for greater capacity; we discussed some of the technical issues; we took some questions along the way.”

Forty-five to 50 minutes later, Dr. Jacobs got the all-clear signal. “I went back to finish the discussion of what the demo would be like, and out they went.”

To this day, he doesn’t think anyone suspected the behind-the-scenes emergency. “Not that I’m aware of. Everybody seemed interested in the technical issues involved. That was enough to keep them occupied. We probably talked also about what the next steps would have to be in order to get to a commercial product, because clearly what we were demonstrating was not going to be something you could carry around in your hand.”

Dr. Jacobs recalled that the problem was a failure in a commercial GPS receiver on one of the demonstration’s cell sites. “I’m not sure how long I could have kept on speaking. It was critical. If we had had a long outage that we couldn’t fix, that might have been it.”

In other words, as he has summarized: “Probably in another half-hour people were going to realize something was wrong, and there would have been no Qualcomm.”

Within a decade, more than 50 million mobile-service subscribers in more than 35 countries were using Qualcomm’s technology. By 1993, the U.S. telecom industry had adopted CDMA as the digital standard for North America, though elsewhere in the world CDMA faced competition from GSM (Global System for Mobile communications).

In 2000, a United Nations body officially approved CDMA as the basis for 3G, a mobile communications standard that lets mobile phones, computers and other portable electronic devices access the internet wirelessly. This standard eventually led to the next generation, 4G, or LTE, with Qualcomm’s inventions helping to lead the way.

For more than half a decade the company has been working to bring the world 5G, in which billions of small devices will be wirelessly connected in smart cities, smart homes and so much more. Separately, to prove in the early days that CDMA could work, the company began making modem chips for wireless devices, and by 2014 Qualcomm’s chip business had shipped more than a billion CDMA-equipped modems.

So Nov. 7, 1989 was the most pressure-packed day of Dr. Jacobs’ professional life, right? As it turns out, although that occasion represented a unique kind of stress, he had faced other challenges that were arguably as formidable—particularly in Qualcomm’s first couple of years.

The company’s first substantial product was Omnitracs, a satellite-based messaging and tracking platform for fleet vehicles that most included trucks. “To even get to (the CDMA demonstration), we had to also avoid bankruptcy by getting the Omnitracs project out and working and have a customer buy that,” said Dr. Jacobs, who in 2013 was named to the Inventors Hall of Fame with fellow Qualcomm cofounder Andrew Viterbi.

“That was quite a strain as well because we were paying for R&D, paying for getting it into production, paying for renting two transponders and going out. I was spending a lot of time out talking with truckers trying to understand their needs and convince them that we would have good solutions. So that was another very difficult time.”

That cloud was lifted with Qualcomm’s 1987 Omnitracs contract with Schneider National, the country’s largest long-haul trucker, which began a long-term relationship. (Qualcomm sold Omnitracs to private investment firm Vista Equity Partners for $800 million in 2013.) “As soon as we did get the major order from Schneider National, we immediately redirected those funds to work on CDMA,” said Dr. Jacobs, who has 14 patents related to that technology.

Once Dr. Jacobs and his team saw more evidence of mobile tech’s potential as a landmark communications force in the early 1990s, they went to work—methodically, carefully.

“It always looked exciting, but then you had to take a more cautious approach in doing your planning.” Fortunately, “people other than ourselves used to make projections, and during those years in the late 1990s and early 2000s, the numbers were always larger than the estimates.”

Dr. Jacobs had long since been well versed, and highly successful, in analyzing and projecting technological trends. In 1968, he joined fellow professor Viterbi and Leonard Kleinrock of the University of California, Los Angeles, to start Linkabit Corp. The consulting company began developing products of its own, including small-aperture terminal satellite systems for business use, and VideoCipher, a home descrambler for satellite television.

Dr. Jacobs left UCSD to manage Linkabit full time. By the time he left Linkabit in 1985, five years after it merged with M/A-Com, he had reportedly made about $20 million from that deal.

Qualcomm has amassed an unprecedented list of accomplishments up to and beyond Dr. Jacobs’ stepping down as CEO in 2005, when he was succeeded by his son, Paul E. Jacobs (Steve Mollenkopf succeeded the younger Jacobs in 2014). Among them:

Similarly, Dr. Jacobs’ list of awards and honors is lengthy. In addition to his place in the Inventors Hall of Fame, he won the National Medal of Technology in 1994, the Institute of Electrical and Electronics Engineers Alexander Graham Bell Medal in 1995, and the 2013 IEEE Medal of Honor.

All of this comes with little flash—the billionaire lives in an older neighborhood of average-sized homes—and a reputation for profoundly unselfish giving.

He has joined a campaign cofounded by Bill Gates and Warren Buffet, The Giving Pledge, promising to donate at least 50 percent of his wealth before he dies. Along with his wife, Joan Jacobs, have pledged/gifted roughly $120 million to the San Diego Symphony, and their $133 million gift in 2013 established the Jacobs Technion Innovation Institute at the Cornell Tech Campus in New York City. He supports High Tech High, a STEM education charter school.

With Qualcomm most recently established as a leader in 3G, 4G and 5G, what’s next? Dr. Jacobs spoke of different kinds of numbers.

“Of course, lots of things are happening with mobile and with computing in general. First of all, we probably have a couple more generations of Moore’s Law to go (referring to an observation by Intel cofounder Gordon Moore in 1965 that the number of transistors per square inch on integrated circuits had doubled each year since their invention).

“As I often say, we’ve got something like 5 billion or 6 billion transistors. One generation gives you another 6 billion, the next generation gives you another 12 billion. So you can do a lot of things with that. I think the direction’s clearly going to be in working with better robots and drones, being able to get better artificial intelligence on board … better recognition, translation, virtual reality, augmented reality, a lot of these types of applications.

“Where it may be going from there, it’s always hard to say. What I did project many years ago, and I think is very valid now, is that for many of us all the computing we’re ever going to need is what we carry around with us.”