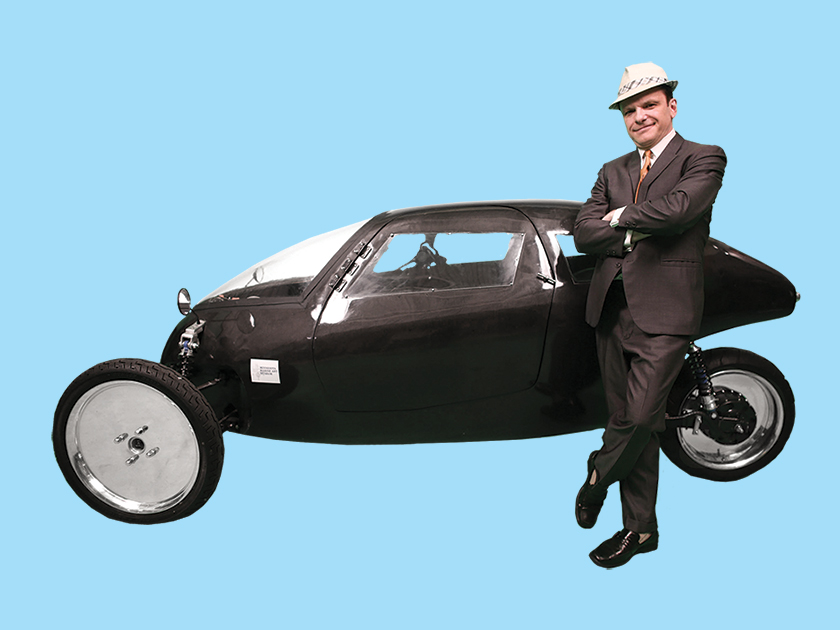 “I even had a guy call me once … he asked me: ‘Is this is a joke? This isn’t technologically possible, is it?’”

Rich Kronfeld is a subversive, and he likes it.

More accurately, he likes his human-powered velomobile—such “a subversive idea” and totally new product category that some people doubt it is real.

The Minneapolis-based inventor wants to provide an innovative alternative to cars via his Raht Racer, a gas-saving, electric-assist vehicle that amplifies the rider’s pedaling power. From its outward appearance— a sleek shell that provides protection from the elements as well as an aerodynamic advantage over bicycles—to its lofty goal of moving as fast as traditional cars, the Raht Racer is so unconventional that some people have a hard time taking it seriously. At least, at first.

“There were people who said that it couldn’t be done and that it made no sense at all,” he said.

“I even had a guy call me once who liked it so much, he thought he could be a distributor. But first he asked me: ‘Is this is a joke? This isn’t technologically possible, is it? It can’t be real.’

“I told him the technology was not far-fetched and had to convince him it was not a joke, that I was not an actor and that the prototype was not being pulled by an invisible rope in the videos when it’s driving.”

The Raht Racer’s pedals do not directly drive the wheels. Instead, they are connected to a unique flywheel generator that powers the vehicle’s motor located in the rear wheel hub. The system senses the torque being applied to the pedals by the rider, then uses the motor to amplify it.

Some of the pedaling power also charges the 13-kWh lithium-ion battery pack, helping to extend its range. The battery’s full charge comes from a wall outlet between rides.

If used in throttle-only (no-pedal) mode, it has a range of approximately 100 miles (city/highway). Full-out, throttle mode will take the vehicle to a top speed of 100 mph (160 km/h). (The prototype has different specs: a range about 40 miles, battery 4.3-kWh.)

The two-seater Raht Racer itself, weighing about 600 lbs., has a carbon fiber body with an aluminum roll cage. With an estimated $24,000 price tag, it includes features such as headlights, tail lights, seat belts, air bag, trunk space and full suspension.

Most velomobiles feature a recumbent tricycle body, enclosed by a full aerodynamic fairing. Some have an electric-assist motor, although the top possible speed with these has been about 20 mph. If they were faster, they would need to be registered and insured as motor vehicles.

When news about the Raht Racer began hitting the internet about five years ago, the lack of speed was said to be its main drawback. Its use has been relegated to the side of the road.

Much has changed. “We got our first patent in 2016 and another one in 2017,” Kronfeld said. “They are both utility patents pertaining to our unique drivetrain, which allows for highway speed pedaling, with programmable fitness profiles—literally a ‘drivable fitness machine.’ The amount of boost the system gives the rider is variable and all power generated by the rider goes back into the system to extend range.

Asked how much leg “oomph” is needed to power the vehicle to top speeds, Kronfeld said: “That is up to the rider. You can set it so a light amount of effort gets you going fast, or hard effort.

“Think of it like a guitar amp. With volume low, you strum and there’s not much volume. You turn it up all the way to 11 and with same strumming effort, it’s so loud you wake up neighbors down the block and the cops come.”

In 2016, the vehicle’s owners were invited into the Bakken Museum of Electricity (founded by Earl Bakken, inventor of the pacemaker and founder of Medtronic), where the Raht was displayed and included in summer educational programs for kids.

“Perhaps the most beneficial entrepreneurial experience I’ve ever had was the NMotion accelerator 2017, in Lincoln, Nebraska,” he said. “That’s where I was part of a small cohort of start-up companies that were put through an incredibly intensive 12-week start-up program.

“They told us that it was like taking a three-year MBA and cramming it into 12 weeks. After NMotion, I had a proven business model, business plan and paying customers.

The future is exciting, even if funding remains an issue—possibly due to the vehicle’s wildly revolutionary nature. Kronfeld said he and his lead engineer, working on the racer’s drivetrain technology, have developed two more intriguing tech concepts that may also be patentable pending funding and further development.

Meanwhile, Kronfeld says he gets supportive emails from all over the word about the Raht Racer. Embracing a revolution can take time.