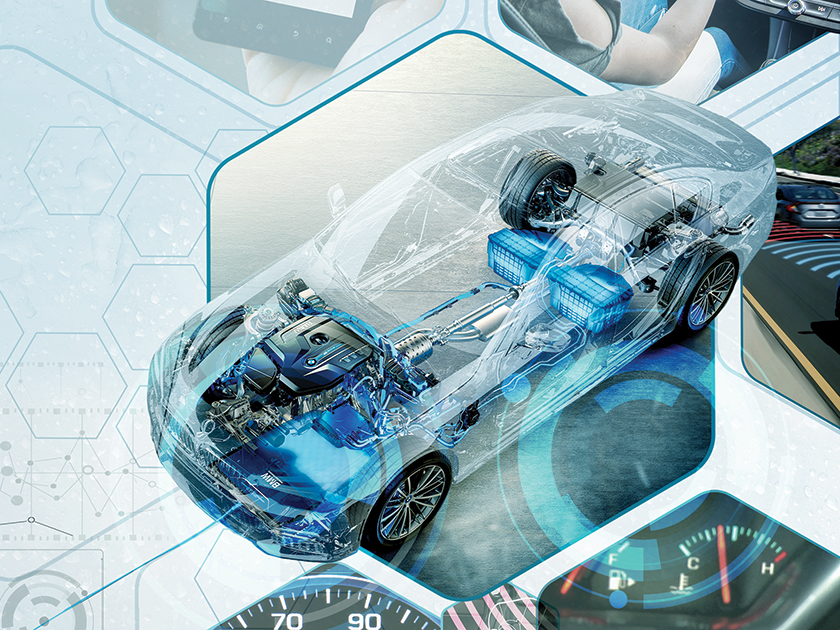 For the better part of a century, this exasperating scene has played out in cold-weather locales throughout the world: Following a night of freezing drizzle, you step haltingly to your car in the driveway to warm it up for the morning commute. Your heart sinks and your blood pressure soars as you see that the door lock is frozen shut.

Thanks to connected mobile apps, you can remotely lock and unlock the doors from inside your home, and start your car with your smartphone without risking life and limb on your glasslike steps and pavement.

Connected mobile apps are changing the automotive experience before we even reach for the car door. They offer more than convenience; they provide real-time information and safety (you can even check fuel and tire pressure now).

These apps are among the most noteworthy innovations in automotive technology in the past few years. Here are our top 10 newest inventions and services, in no particular order, that would have gotten Karl Benz all revved up.

GasBuddy helps your dollar go farther as your car sits idling in said traffic. Like Waze, it relies on crowdsourced data via users who report gas price information through its app or website.

You can also buy a car or rent one through certain connected mobile apps. Whichever app you select, don’t forget to check whether there is a monthly or yearly subscription fee connected to them.

You may have heard of some cars with teenage driver controls. Chevrolet’s teen driver feature notifies you if the car is driven beyond a certain speed, and (gasp!) disables the stereo if seat belts aren’t used.

Other safety technologies include a Side Blind Zone Alert, Forward Collision Alert and Forward Automatic Braking.

The feature also allows you to track your teen’s driving performance via the industry’s first in-vehicle report card. It tells parents whether safety systems like ABS or forward collision alert were activated while the teen was driving.

The goal is to give parents the tools to discuss and correct some possible mistakes their teens make behind the wheel.

The numbers are catching up to the crooks. Experts estimate that nearly 46 percent of the 750,000-plus motor vehicles projected to be stolen this year will be recovered. Credit automakers with technology that they are building into their vehicles.

Technology such as BMW’s Connected Drive or GM’s OnStar protect drivers in two ways. They allow effortless diagnostics, concierge, and post-crash notification for summoning rescue services, and also can be used by police to pinpoint the exact location of a vehicle that is no longer in the owner’s possession.

OnStar’s Theft Alarm Notification can inform you if your car alarm goes off. Once you report your stolen vehicle to OnStar, advisers can use GPS technology to locate your vehicle, alert authorities and, in some cases, remotely slow your vehicle so thieves won’t get far.

With its trademarked Remote Ignition Block system, OnStar can also remotely prevent a thief from restarting your vehicle. If your vehicle is stolen, advisers work with local authorities.

This technology improves on the decades-old concept of cruise control to further ease the commuting experience. By using sensors built into the car, adaptive cruise control can match the speed of the car in front of you, meaning you don’t need to constantly hit the gas and brake in highway traffic.

Even the frustration of stop-and-go traffic can disappear via systems that allow the car to be brought to a complete stop and then resume automatically. (If you’re thinking this is a precursor to a driverless car world, you advance to the bonus round.)

Once an expensive option that was reserved for luxury cards, ACC is now standard equipment in a number of models that retail for less than $25,000. A late 2018 study by U.S. News & World Report said that the 2019 Honda Fit is “the most affordable vehicle with adaptive cruise control available today.” It was also named one of the best new cars for teens.

AEB uses sensors to determine whether a forward collision crash is imminent and automatically applies the brakes to diminish the severity, or avoid a crash entirely.

This feature is so important that the auto industry agreed to make AEB standard in cars by 2022. One caveat: Don’t routinely rely on AEB to stop you because it’s designed to be a last resort when the driver is distracted. It can be very alarming when the system engages.

U.S. News & World Report has a recent list of dozens of models costing less than $25,000 and including AEB.

For most cars with this feature, it entails reminding drivers that the rear door is open before the trip. But Hyundai’s system on certain models uses sensors to keep monitoring the rear seat for motion after the car is parked and all doors are locked.

Hyundai’s version defaults to “on,” rather than relying on parents to activate it. If the vehicle is locked and the ultrasonic sensor detects movement in the rear seat, the horn honks on and off for about 25 seconds—a potentially important warning to prevent child heat-related injury or death.

If the alert is not disabled by unlocking the vehicle and opening the rear door and the sensor detects movement again, the horn will sound for another 25 seconds. This sequence runs up to eight times.

Even your electric toothbrush has wireless charging. So why hasn’t this technology spread to electric vehicles?

That’s about to change. BMW’s pilot program in the United States is developing a wireless charging pad for electric vehicles. No more pulling into your garage, getting out and plugging in a cord. You just drive over the top of the charging pad.

In late March, Reuters reported that Norway’s capital city of Oslo will be the world’s first metropolitan area to install wireless, induction-based charging stations for electric taxis, in an effort to make a zero-emission cab system by as early as 2023. Further, Norway is mandating that all new cars sold in the country be all-electric by 2025.

But don’t get your hopes up for a similar situation in the United States anytime soon. Norway has only 5.3 million people, making it easy for the government to make large-scale, holistic changes to its infrastructure. Also, Norway doesn’t have any automotive company that would fight taxes and other legislation aiming to motivate citizens to use electric vehicles.

As tech gadgets including the smartphone add greatly to the risk of distracted driving accidents, car makers are racing to add features to help reduce the soaring number of these incidents.

In a highly positive overall review, Forbes cited the Subaru Forester’s DriverFocus technology, which uses facial recognition software to warn drivers showing signs of fatigue or distraction behind the wheel. It also allows drivers to pre-program their driving positions.

The car uses a dashboard-mounted facial recognition camera to scan a driver’s face and automatically adjust seats, mirrors, and air-conditioning preferences to that driver.

For some truck buyers, convenience is as important as safety. The six-way, adjustable, GMC Sierra MultiPro tailgate showcases the latest in versatile features at the rear of the vehicle.

MultiPro’s design includes the primary gate, hinged like a conventional tailgate, and a smaller inner gate that is hinged within the primary gate panel itself. Raising and lowering these two tailgate panels in different combinations allows MultiPro to assume several different roles: a bed extender, an entry step, and many other functions.

If you want to run the stereo but not have the truck running, the 100-watt, exterior Kicker MultiPro Sound System is integrated within MultiPro’s inner gate panel. The system incorporates two 4-inch coaxial drivers, a compact amplifier and controls, a USB port for device charging and flash memory playback, and full Bluetooth streaming compatibility.

Kenworth and Toyota are collaborating to develop 10 zero-emission Kenworth T680s powered by Toyota hydrogen fuel cell electric powertrains. It’s part of a $41 million Zero and Near-Zero Emissions Freight Facilities grant preliminarily awarded by the California Air Resources Board, with the Port of Los Angeles as the prime applicant.

The grant money is part of a larger $82 million program that will put fuel cell electric tractors, hydrogen fueling infrastructure, and zero-emissions cargo handling equipment into operation in the ports and Los Angeles basin next year.

The Kenworth T680s will transport cargo across the Los Angeles basin and to inland cities while generating zero emissions other than water vapor, because of their fully electric hydrogen fuel cell powertrain integrations.