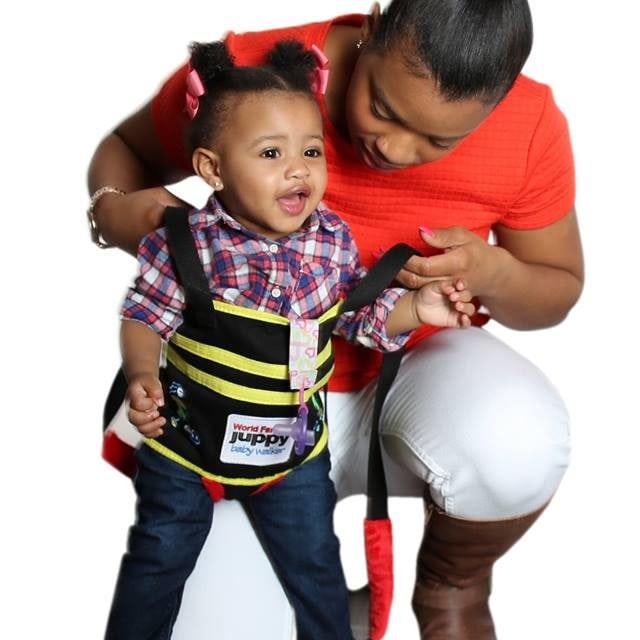 As a mother of two kids, I tried just about every new baby product on the market in the 1980s. Naturally, my primary concern was their safety.

Of course, since the Consumer Product Safety Improvement Act of 2008, there are even regulations for selling baby products at resale shops and yard sales. Because I develop both baby products as well as consumer products in China and hold a customs broker license, I must be even more cautious.

I learned about the Juppy® Baby Walker in an article in AARP The Magazine. As a manufacturer, I was a bit concerned with the various components of the product. So I read more about it and set out to speak with its inventor, Jeffrey Nash.

Edith G. Tolchin: Please tell us about your background, family and children.

Jeffrey Nash: I grew up in a small town north of Boston: Lynn, Massachusetts. I’m the oldest of 10 children, eight of which were boys. Our mother easily kept us boys in line. I went to high school at Lynn Classical and was the co-captain of my high school basketball team. I also won three New England boxing championships as a young man.

Four years after graduating from high school, I joined the U.S. Marine Corps and was awarded a top-secret security clearance that enabled me to be appointed to the presidential security team. This team provides security for the president’s helicopter. Once I returned from the Marine Corps I wanted to learn the business of clothing sales, and did. I have done very well as a clothing salesman due to the passion that I have for it. I have three children—two boys, one daughter—and six grandchildren and one great-grandson. All my children are productive in their respective fields. I’ve definitely had a very interesting and fruitful life!

EGT: How did the Juppy Baby Walker come about? Have you ever invented anything before the Juppy?

JN: The idea came in 2008, when I was at a soccer game with my granddaughters and noticed a young mother teaching her baby to walk. I noticed the mother hunching over, and I imagined how uncomfortable it must have been. Watching the young mom pulling on the infant’s arms had to be very dangerous, and it ran the risk of injury for both the mom and the baby.

As crazy as it sounds, for some unknown reason, the design for the first Juppy came to me right at that moment. Immediately upon my return to my home in Las Vegas, I had a prototype made based on my own design; after about four attempts, I finally had a model that I believed would be suitable.

That same year, the economy was wreaking havoc and many people seemed paralyzed. I was notified by my employers that I would receive a substantial pay cut due to the lagging economy. All signs pointed to launching my business, so I did.

I started trying out my invention on the children of customers in the retail store where I still worked, to see their reactions and to receive feedback. After making the necessary adjustments, I hired a patent attorney and then connected with a manufacturer that ended up making the first batch of Juppys. Shortly afterward, I took three weeks off in order to find out whether my invention was marketable. I visited stores from Las Vegas to Santa Monica, and at the end of three weeks, I sold $12,000 worth of Juppys.

EGT: What is the Juppy made of?

JN: The Juppy is made of 99 percent cotton and 1 percent spandex.

EGT: Is the product adjustable for both big and little babies?

JN: We carry the Juppy in two sizes: One is for babies with a waist size of 16 inches to 22 inches. The other is for older children who have challenges when it comes to walking, and that one is (up to) 28 inches at the waist.

EGT: How did you create your first prototype? How many versions did you have before you got it perfect?

JN: I drew what was in my head and then had a tailor sew it. It took four prototypes to get it to where I wanted it to be.

EGT: Are you manufacturing in the USA, or overseas? If overseas, how has your experience been? Any difficulties such as communication problems?

JN: I am manufacturing overseas and mostly communicate via email. I have not encountered any difficulties in seven years.

EGT: How safe is this product? Does it conform to CPSIA batch testing and regulations?

JN: The Juppy is simplistic and safe, and does conform to CPSIA standards

EGT: Isn’t it possible for the baby to get caught in the straps?

JN: The only way the baby could get caught in the straps is if someone intentionally wrapped them around the baby.

EGT: How is your product packaged?

JN: The product is packaged in a clear carrying case with an image of the Juppy. I designed it.

EGT: I see you’ve been featured in many magazines, including Inc., AARP and Parade. How has the exposure been?

JN: The exposure from magazines has been phenomenal. It has been excellent regarding making parents aware of the Juppy as an alternative to dangerous baby walkers with wheels.

EGT: How is the Juppy available?

JN: I only sell online at thejuppy.com.

EGT: Do you have any advice for readers who might be interested in developing a baby product?

JN: Believe in yourself, and don’t allow others to deter you from achieving your dreams.