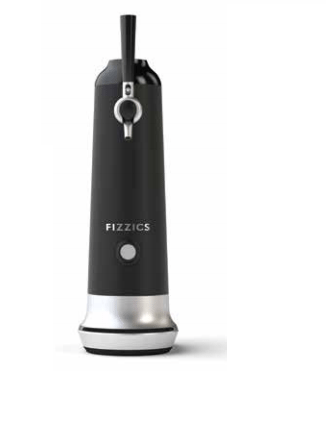 America’s love for beer is foaming over in an extreme way, as are new flavors. The number of U.S. breweries skyrocketed from 2,456 in 2012 to 4,269 in 2015, according to The Brewers Association. Brewers are using new strains of hops, yeast, fruits and herbs to create styles and flavors not seen before in the industry.

Despite the innovation with the beer itself, relatively few accessories are available to increase the enjoyment or enhance the experience of drinking it. One of the biggest challenges to brewers is to keep a consistent flavor profile across the different forms of packaging and distribution. The same beer poured from a tap can taste wildly different when enjoyed from a can. Fizzics, a new beer-dispensing unit, enhances the brew’s natural flavor and gives drinkers a fresh-from-the-tap taste.

Fizzics is a home-based beer tap that gives it a head of microbubbles. Pull down the tap, and beer is dispensed head-free. Push up the tap handle, and the last couple of ounces of the pour are given a perfect creamy head that releases the beer’s aromas. The chamber can dispense beer from a single 12-oz. can or bottle up to a 64-oz. growler, making it very versatile for the home beer enthusiast.

Fizzics co-founders Philip Petracca and David McDonald were enjoying a brew at one of their favorite spots, the Brooklyn Brewery, when they started wondering why beer does not taste as good out of a bottle or can as straight from the tap. This simple question kicked off nearly a year of research and prototyping. The duo researched how taste is interpreted and what influences the “mouth feel” of beer. They found that the head of a beer is the key to the flavor. A beer poured in the normal way creates a head that dissipates too quickly, resulting in a flat taste. They also found that additives such as nitrogen imparted unwanted flavors.

Their research kept leading them down blind alleys until they found their breakthrough from an unlikely source. “We had all but given up on this pursuit,” Petracca says. “My son was an infant and was sick. I was in his nursery and we had a humidifier in his room, and like most engineers do, I start wondering how things work. At 3 o’clock in the morning I had this humidifier in a million pieces, and I discovered that they were atomizing water utilizing a sound pressure wave generator.

“I immediately called Dave in the middle of the night and said, ‘Hey, I think this is a great piece of technology that we can use.’” Within 48 hours, the two had built their first prototype from the sacrificed humidifier. It worked well, creating a microfoam head on the beer. Their friends and family all loved it—including Petracca’s wife, a devoted wine drinker.

But they knew they had to prove the technology with beer enthusiasts. Fortunately for the New Jersey residents, one of the biggest beer festivals on the East Coast—The Atlantic City Beer & Music Festival—was right down the road. The two-day event with hundreds of brewers and more than 40,000 attendees was the perfect opportunity to debut the product. They prettied up their breadboard prototype with some 3D-printed parts, took it to the festival, and it was a huge success.

“It was surreal,” Petracca says. “We had a line of people at our booth from the time we opened until the time we closed. We had brewers coming to us with their beer…saying, ‘I need to understand what everyone is talking about. How are you going to improve my product?’” The response led the team to file a series of patents on the product. Although they could not afford a big-time patent firm, they found an independent patent agent who was a former engineer to help them write up the patents. They have now filed 11 different domestic and international patents to cover the product.

The real breakthrough came when Fizzics was launched on Indiegogo. McDonald and Petracca did some research on crowdfunding and decided it would be a great way to gauge the product’s commercial efficacy.

They launched the campaign in Summer 2015 and hit their funding goal of $50,000 on the first day.

The co-founders quit their jobs that day to work on Fizzics full time, and the campaign finished with more than $250,000 raised. Their next big challenge was finding a manufacturing partner to hit their delivery date. Fortunately, Petracca had lived in China for a couple of years to support projects at his day job, so he had relationships with overseas manufacturers. He found an original design manufacturer that could do the molding and assembly for the product as well as help work through some of the design details.

Petracca and McDonald delivered units to Indiegogo backers on time, just five months after the close of the campaign. They struck a deal with Brookstone to get the product into the company’s catalog and became the publication’s top seller last holiday season.

The enthusiasm for Fizzics shows no signs of slowing down. The team was approached by the producers of the TV show “Shark Tank” after a New York Times article featuring the product’s success last January. After months of back and forth with the “Shark Tank” team, Petracca and McDonald were fortunate to make the final cut, beating more than 100,000 applicants. Their episode aired in September and was a big hit: For the first time in the show’s history, all six sharks wanted in on the deal. In the end, they struck a deal with Mark Cuban and Lori Greiner worth $2 million.

In less than three years, Fizzics has gone from tap-room banter to millions in sales.

The two continue to grow and expand the technology. In early 2016, Fizzics struck up a partnership with the global design and strategy firm Frog Design and worked together to design the Fizzics Waytap, which uses the same ultrasonic technology but in a sleeker and smaller package. The project, launched on Kickstarter in October, raised $1,086,819.

The Fizzics team is also looking to add the technology to commercial tap systems so that breweries and bars can pour the perfect pint straight from the tap. So even if you are not interested in using the system at home, you may soon be able to taste the benefits of the technology at your local watering hole.