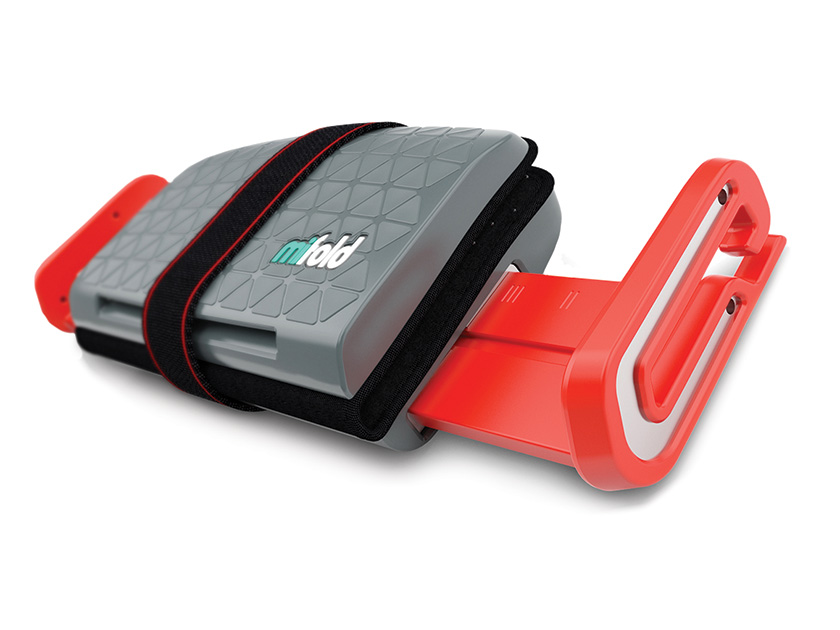 Portable booster seat is 10 times smaller than the norm

“I wanted to have a car seat that was so small and portable that the kids could take it with them in their school bags and always be safe, no matter whose car they were in.”

Size matters, especially in a shrinking world. From batteries that are smaller than a pencil eraser to an IBM computer that measures 1mm by 1mm, inventors have never placed a greater premium on portability.

Portability with safety takes value to a new level. So when Jon Sumroy found a void in the marketplace that involved children, he invented the mifold Grab-and-Go Booster Seat.

Billed as the most advanced, compact and portable child car safety seat in the world, mifold (mifold.com) is 10 times smaller than a regular booster and just as safe. It’s intended for children 4-12 years old who weigh 40-100 lbs.

Sumroy was working at a tech start-up and living with his family in Englewood, New Jersey, in the early 2000s. “At the time my kids, who were still little, were often in other people’s cars: carpooling with the neighbors, with their grandparents and often in taxis,” he says.

“Their booster seats were too big and bulky to always carry from car to car and often, we’d just cut corners and they would go unprotected. I wanted to have a car seat that was so small and portable that the kids could take it with them in their school bags and always be safe, no matter whose car they were in.

“Unfortunately, nothing existed,” he says—although in retrospect, that proved fortunate.

In 2012, Sumroy read an article that said about half of all U.S. kids travel without the correct booster. He revisited his idea, began working on it as a hobby, and after a couple years set up the company that sells mifold.

“The very first thing I did was to register a U.S. provisional patent, in May 2012. I then registered a PCT (Patent Cooperation Treaty, an international patent law treaty) a year later, as I was not yet sure the idea would ever come to fruition and the PCT allowed me more time.

“Now this original patent has been granted and registered in many countries worldwide—and the protection goes all the way back to that original provisional filing in 2012. This first patent is now one of several we now have.”

But the longest and most difficult part of the inventing process for Sumroy was prototyping.

“We have made hundreds of prototypes,” he says, “from my first, homemade concept—a black canvas matt with straps and mountain climbing clips sewn on—through Styrofoam models to 3D-printed models, then CNC’ed (computer numerical control) components and finally pilot production products.

“All of this was the journey from idea to the shopping cart. I love every one! Occasionally I rummage through the storage bins in the office back room and play with them to remind me just how far we have come.”

He says the process took three years: “Over and over again, we made prototypes and took them to the testing laboratories to crash test—only to see something fail. However, looking back with hindsight from where we are now, with nearly 1,000,000 seats sold worldwide, the prototypes tell the story of our journey. It was long, hard and wonderful.”

Since a fabulous 2016 debut on the crowdfunding site Indiegogo in which it smashed its $40,000 goal and raised $2.6 million, mifold went on to raise $3.3 million from investors and has struck deals with retail behemoths such as Amazon and Target.

Beyond the safety stats

When it comes to an invention designed to enhance child safety, compliance with regulations has added importance.

The mifold seat also has specific regulatory approval in countries that requite their local approvals: Chile, China, South Korea and Taiwan. This covers every country in the world that regulates for backless child restraint systems.

But often, a human story conveys the value of an invention more than statistics can.

On Sept. 30, 2016, Kylynne Huber and her kids were involved in a car accident. She recalls, on the product’s website: “I decided to purchase the mifold booster seats because we have four kids in car seats and I loved the idea of having such small seats to be able to fit my older kids in the back with a 5-point harness car seat in the middle of them.

“I took the brunt of the impact. When I knew I was going to crash, I turned my van to try and take most of the impact over my kids. Thank goodness it worked. I hit the steering wheel with my chest and my entire face, so I’ve had residual issues from that, as well as whiplash and back issues.”

The family walked away from the wreck without any hospital stays. They used the mifold boosters after the accident to get the kids home.

“I know without a shadow of a doubt that my kids were saved because they were properly placed in car seats and booster seats,” Huber says. “I have been wondering how the mifolds would withhold a wreck, and I am now 100 percent confident in saying they work!! My babies are safe!”

The mifold booster is now used by the Bradley County Sheriff’s Office in Tennessee in some patrol cars to transport kids in emergency situations, with similar agencies likely to follow suit.

The rate that booster seat use reduces the risk for serious injury for children ages 4-8 when compared to seat belt use alone, according to kidsittingsafe.com.