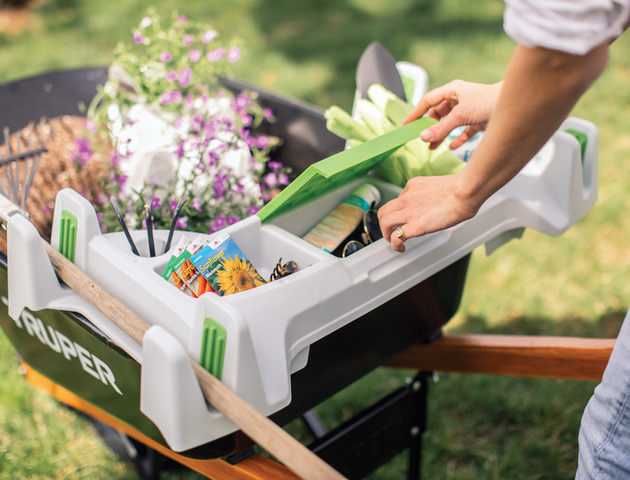 ”We have a very strong patent protection. You could have a billion-dollar product, but if it’s not protected, it’s pretty much worthless to you.”

Here’s a new product I noticed on “Shark Tank.” Yard and construction workers can benefit from Little Burros, a versatile invention that saves you steps by organizing your tools and gadgets on your wheelbarrow.

Edith G. Tolchin (EGT): What is your background that led to this invention?

Bob Thorsen (BT): I’ve owned a construction business, Thorsen Construction, in the Virginia, Maryland and D.C. area for over 40 years. During that time, I have used tools and bought tools repeatedly. I am always observing which tools were the best, most helpful and quality made. It wasn’t until working with my wife in the yard that I thought of the Little Burros.

Sudie kept asking me to run back and forth to grab her tools. It was exhausting! At one point she even raked up her cellphone into a leaf bag, so we had to call her cell phone to determine which leaf bag it was in. I thought of the idea to make a tray that sits on top of her wheelbarrow to hold everything she needs.

I went to the garage and built it out of cardboard and duct tape. After showing it to the kids, we realized it solved a lot of problems for a lot of people and that it would be helpful in the yard.

We found a design and engineer team, the Bolt Group, and a plastic factory in Niles, Ohio. It was, honestly, a dream team. We showed the 3D-printed prototype at the National Hardware Show in Las Vegas and it won the Retailers’ Choice Award out of 11,000 products. That was the last push and boast of confidence we needed to get it into production.

EGT: What is the difference in the two styles featured on your website—The Original Little Burro, and the Burro Buddy?

BT: The Original Little Burro was the very first concept. It’s a garden tray that sits on top of your 4-, 5-, 6-, and 7-cubic-foot wheelbarrows, organizing all your tools. It holds a drink, two long-handle tools, two short-handle tools, a flat of flowers, a water-resistant compartment for your cellphone, a spot for a 5-gallon bucket, and even a spot to hold your lumber so you could use it as a saw horse.

We won several awards, including Bronze in the International Design Awards, and knew we should take it into production. After selling a good amount, we were able to hear customers’ and store buyers’ feedback.

A lot of people were asking for a simplified version to carry the long-handle tools, short-handle tools, cellphone and drinks. So we decided to make the Burro Buddy. It takes up less of a footprint over the top of the wheelbarrow, allowing you to maximize loading it up while still providing the basic organization features of The Original Little Burro.

EGT: How did you get on “Shark Tank”?

BT: We can’t share too much, other than what you saw! But I will say it was an extraordinary experience. For the past seven years, people have been telling us, “Hey! You should go on ‘Shark Tank’! So it was fun to actually see it through.

When we originally applied, my daughter, Becca, spearheaded it. She passed away a short time later, so it was significant for me and my daughter Mollie to see it through and finish what we all started.

We were offered two royalty deals but turned them down. We went in asking for equity and knew we weren’t going to be persuaded otherwise. No deal is better than a bad deal!

EGT: Prior to “Shark Tank,” did you try any crowdfunding?

BT: No, we are self-funded. We knew if we brought on outside investors it would only work if they were very strategic partners. We were hoping that would have been one of the Sharks, but not at the cost of a royalty deal.

EGT: Are your inventions patented?

BT: Yes! We took this aspect of the business very seriously and did not encounter any problems during the process. We have a very strong patent protection. You could have a billion-dollar product, but if it’s not protected, it’s pretty much worthless to you.

EGT: What is the retail pricing for each product? Where are you selling?

BT: Currently, we are sold out of The Original Little Burro and due to COVID-19, we will be waiting a little bit to get those back into production. Its MSRP (manufacturer’s suggested retail price) is usually $59.95.

The Burro Buddy’s MSRP is $39.95 and is sold online at large e-commerce retailers including HomeDepot.com, Lowes.com and Amazon.com. You can find us in select Sam’s Clubs, ACE and True Values.

EGT: Where are you manufacturing?

BT: We are manufacturing them in Niles, Ohio. China never really was an option for us; we donate a portion of all our sales to “A21” to battle human trafficking, and we’ve been aware of the labor trafficking for a while. We knew the only way we could really guarantee our products were free of labor trafficking was by making them at a factory in the United States.

EGT: Who handles your quality control?

BT: We trust our factory here in the States to handle the quality control, which was also one of the benefits with manufacturing in the United States. You get to know the people behind the factory and can give feedback if there is something you are not happy with. However, we ultimately are the last party to ship them out, so we double-check their work.

EGT: Who handles your PR?

BT: My daughter, Mollie. She’s our chief operations officer, so she wears many hats. I will also add that we are fortunate to have gotten a great deal of organic press. We have awesome customers who have helped spread the word.

EGT: Do you have any new products in development, or lined up for launch?

BT: Yes! Our goal was always to have a line of quality, helpful, innovative products. We want to make tools that help solve problems and can help save people time and energy.

We currently have the concept for our third product, but COVID-19 put a little bit of a dent in our plans for a target release. It is a product we’ve been really excited about. We can’t tell you much yet, but we think the world would love it.

EGT: Have you faced any obstacles in developing The Original Little Burro or the Burro Buddy?

BT: Many! What inventor or startup hasn’t? We have been in business for seven years now, so we’ve seen our fair share of obstacles personally, and as a company.

Every one of them just made us work harder. Half the battle is sticking through the obstacles and not seeing them as a roadblock but a hurdle to just jump over.

EGT: Any advice on developing an invention?

BT: Everyone has great ideas, but not everyone has the drive and work ethic to see it through. Being an inventor isn’t thinking of something; it’s making something.

Remember these words when developing a product: “It will take you longer than expected and cost more than you planned.”