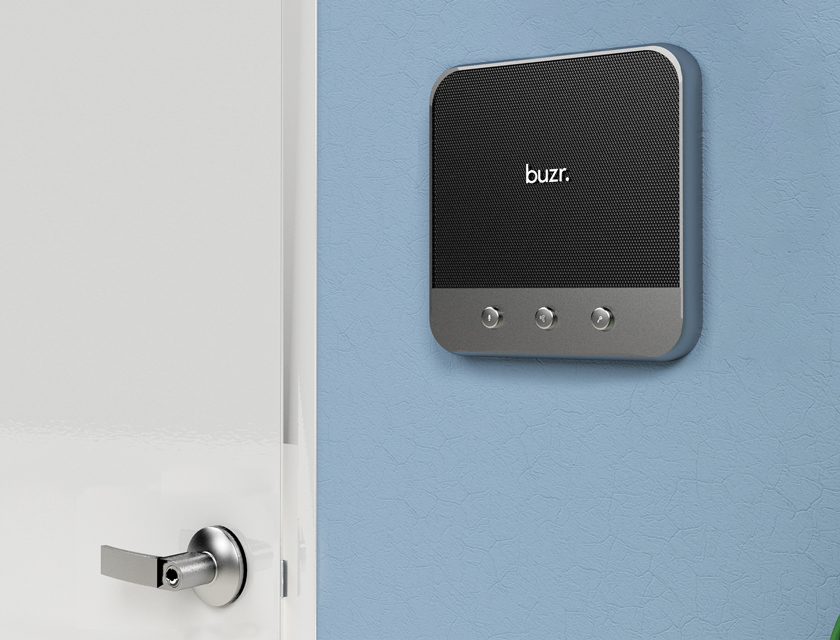 “If I could somehow remotely push that buzz button, I would be able to solve all those problems.”

An Airbnb host in New York City who worked in finance, Liebel would often travel for work and did short-term rentals on his apartment while he was away. This proved challenging for his building.

Although he had a smart lock on the door to his unit, his did not have a doorman, so it was difficult to transfer keys to renters if he was not there to meet them.

“I was giving them [keys] to the guy at the bodega on the corner, and having my guests pick them up from there. I was burying them in the cracks of the sidewalk near the tree in front of the building,” he recalls. “This is the pain that I discovered a lot of people in the city have—the management of the front door.”

He also had problems getting packages because there was no one available to let the delivery person in the building.

The technology behind most intercom systems is from the late 1800s. There are also security risks: People can “shoulder surf,” where uninvited guests follow an authorized guest into the building, or a resident who is lax about security may buzz in anyone who calls from the intercom.

Liebel knew there had to be a better way to give people access to the main entry: to connect their intercom to their mobile phone.

“I realized that as a resident I could make no changes to the building front door, but I did have the intercom station in my apartment. If I could somehow remotely push that buzz button, I would be able to solve all those problems—as well as the problems of others living in beautiful, historic buildings who do not have updated technology.”

His solution was Buzr, which brings IoT-enabled security and flexibility to the main entrance.

Buzr is a door buzzer for residences with a wired door opening and intercom system. The device replaces the faceplate control inside the user’s unit and allows remote operation of the main door.

Users can talk to people at the front door through the app and provide virtual keys for guests.

The device, a direct retrofit of existing buzzer systems, is compatible with thousands of different buzzer configurations. This includes old-style analog through modern digital units.

Buzr runs on four AA batteries. It has a built-in temperature sensor to monitor conditions inside the unit to track how well landlords heat and cool the buildings.

It also installs quickly—in 15 minutes—with no changes to the front of your building.

Once Liebel had his idea, he went to work on a prototype.

He used a Raspberry Pi and some relays, hooking that to his intercom system that was connected to his WiFi. He wrote code that would allow him to send a text message to remotely buzz the main entrance.

It worked perfectly. Liebel used it for his Airbnb clients and found it useful for package carriers as well.

With a working prototype in hand, he started working toward turning Buzr into a business. Liebel enrolled in an MBA program at Cornell Tech, a satellite of Cornell University in New York City, and used the opportunity to help find a co-partner.

There he met Jeremy Walker, who became his cofounder and technical lead in June 2020. They entered Buzr into the Cornell Tech 2020 Startup Awards competition and were one of the four winners. This validated the concept in front of Cornell business faculty as well as venture capitalists, providing them seed money and access to co-working space.

They quickly installed a few units at friends’ apartments in a 20-unit pilot run and started working on the manufacturing design. Because there are more than 2,000 types of intercom designs of various vintage and technology, the partners had to spend a lot of time ensuring that Buzr has universal compatibility and is easy to retrofit in any situation. They also filed a patent portfolio to help protect the product—and especially the novel way they handle audio.

Liebel launched the product to the public at the all-virtual Consumer Electronics Show in January 2021. This yielded major publicity for the product and drove pre-sales while the design work was being finished for the first manufacturing run.

Liebel is now pushing to do a larger-scale pilot run that he hopes to run over a few square blocks. The goal is to prove that Buzr enhances building security and results in fewer lost packages.

Work with contract manufacturers is under way; pre-orders will start shipping early next year.