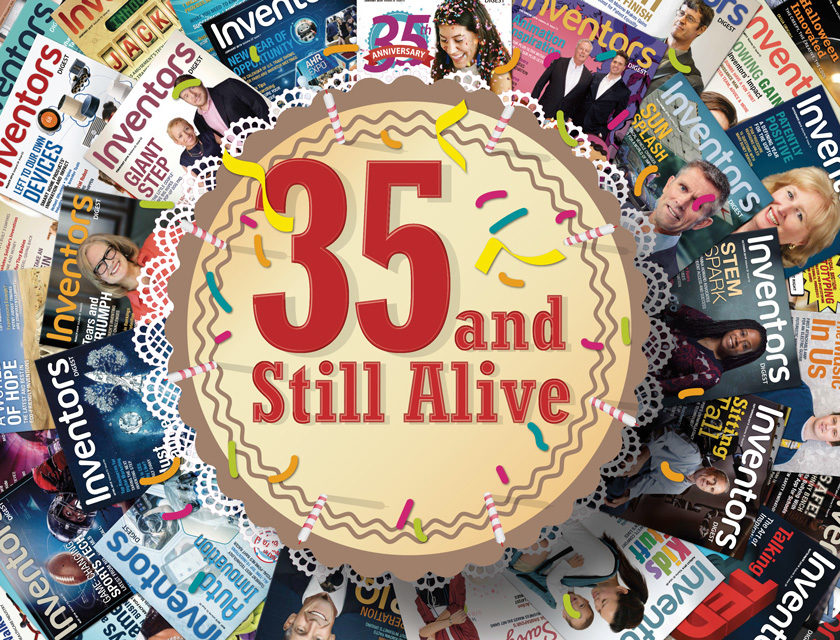 To get an idea of how enduring and dependable Inventors Digest has been, it began publishing before Bruno Mars, Carly Rae Jepsen or Michael Phelps were born.

Ronald Reagan had just begun his second term as president. The world’s first commercial cellphone, made by Motorola, had been approved by the Federal Communications Commission just 18 months earlier—and unless your bank account had seven figures or more, you didn’t own one. The internet? A rumor.

But maybe the best indication of Inventors Digest’s long history is that its first issue was produced by an electric typewriter.

At that stage in spring 1985, ID was an eight-page newsletter that was printed using cold type. Anytime there was an error on the page, the printer would have to physically cut or remove that piece of type from the page before it was typeset.

John Farady, founder and president of the Affiliated Inventors Foundation, created the newsletter after seeing a need to educate the public about the inventing and patent process. Inventors Digest’s first editor was Adrienne Walker.

Rines’s publication was more a quarterly newsletter than a magazine for the first five years, but her tireless efforts helped it grow in physical stature as well as relevance. After she sold Inventors Digest to Louis Foreman in 2007 (see this month’s Editor’s Note), the magazine was printed every other month; it became a monthly publication beginning in 2008.

It’s hard to overstate the importance of the world’s longest-running magazine on inventing—a publication that has doggedly educated and protected independent inventors through a major stock market crash, an unprecedented terror attack on U.S. soil, a historic recession, and six U.S. presidents.

Here’s hoping you are as thrilled by this anniversary as we are, and that you continue your loyal support for another 35 years and beyond.—Reid Creager

Brilliant and Tough, They Are. So Is ID

The gemstone for the 35th wedding anniversary is emerald. It is brilliant green, with a highly polished shine.

Emeralds rank high on the Mohs scale for identifying a gemstone’s relative hardness. Yet they rate low on toughness because of imperfections that make them brittle.

Joanne Hayes-Rines and Louis Foreman are brilliant and tough.

They’ve had to be. It’s no small feat to oversee a printed publication—especially a niche publication—in this digital era as advertising and sponsorship dollars stream to online. And it’s an uphill climb to advocate for the independent inventor, as court rulings too often side with corporate giants.

In her November 2016 Inventors Digest cover story, Hayes-Rines admitted to an intimidating learning curve when she joined the then-quarterly bulletin in 1987. She eventually became deeply involved in legislation to protect the small inventor with her late husband, Robert Rines. That passion played out during her 20-year tenure as editor of ID (13 years as publisher).

It can be argued that Hayes-Rines is the most noteworthy female champion for the independent inventor in modern history.

So it’s fitting that our 35th anniversary issue has a photo of a female inventor on its cover. Inventors Digest has been among the leaders in promoting more involvement by women and in STEM-related fields that foster innovation.

When Hayes-Rines retired in 2007, she was careful to pass the ID torch to someone who had a similar commitment to the independent inventor: product development titan and inventor supreme Louis Foreman, founder of Charlotte-based Enventys Partners.

Foreman has a prominent role in many national IP-related organizations and is a frequent public speaker on behalf of patent-related interests. He’s in his 14th year as publisher, having seen ID through the Great Recession that began in 2008.

Thirty-three of ID’s 35 years have been led by these two giants in the inventing world, who have made countless sacrifices to ensure you are holding this publication in your hands. Their luster is bright and enduring.

Happy Birthday to Us!

Inventors Digest has supported the work of independent and small inventors for 35 years, and the United States Patent and Trademark Office congratulates the magazine on this milestone anniversary.

Thank you for chronicling the inspiring stories of inventors who worked hard, took risks, persevered, and ultimately overcame tremendous odds to succeed. Thank you for continuously fueling and showcasing the ingenuity of those participating in America’s innovation ecosphere.
—Andrei Iancu, under secretary of commerce for intellectual property and director, U.S. Patent and Trademark Office

Sustaining a successful niche publication for 35 years is no mean feat. It takes dedication, creativity and passion, which are the same attributes that define the independent inventor.

Having shepherded ID for 20 years, I’ve been thrilled to watch it continue to thrive and grow and be more valuable to the inventor community than ever before. Hats off to publisher Louis Foreman and editor Reid Creager and the entire team for their wonderful work. Here’s to another 35!
—Joanne Hayes-Rines, Inventors Digest editor from 1987 to 2007

“Intellectual property literacy is essential for all inventors, visionaries and entrepreneurs hoping to thrive and achieve long-term competitive advantage in the knowledge economy. Inventors Digest plays an important role in bringing that literacy to the innovators of tomorrow— helping them to better understand the IP protections necessary for creating and scaling solutions to society’s biggest challenges.”
—Dr. Gary Michelson, founder, Michelson 20MM Foundation, renowned surgeon

ID has given us so many wonderful insights into businesses and people who have made a difference in so many lives.
Thirty-five years is a testimonial to the quality and dedication to the writers, editors and staff for continuing the highest standards for their readers and sponsors! Congratulations.
—Johnny Bench, baseball Hall of Famer, inventor of anti-bullying app

Congratulations to Inventors Digest on celebrating 35 years! It has been an honor to play a small role over the years contributing articles to the flagship independent inventor publication.

ID has meant so much to the inventor community and has been an unwavering guiding light for an industry constantly in need of a sentinel.
—Gene Quinn, founder of IPWatchdog, patent attorney

I remember it well, the creation of Inventors Digest. John Faraday, Joanne Hayes-Rines and I later talked about what the future would be like and how ID could be of real value to inventors everywhere.

Surviving 35 years in anything is a noteworthy accomplishment.

I have had the good fortune to have several articles published in the magazine and even had my photo on the cover of the August 2014 issue.

Every lecture I give across America to audiences—students to seniors, for the USPTO or LES (Licensing Executive Society) or at universities—I always hold up a copy of the latest issue and expound upon its great value. Here is wishing you another 35 years. Keep up the great inspirational work you are doing for the creative inventors across America and beyond.
—Lawrence J. Udell, founder/chairman, California Invention Center

Congratulations and many thanks to Louis Foreman, publisher, and Reid Creager, editor-in-chief, for publishing Inventors Digest every month and thereby enlightening the community of inventors.
The world depends on American innovation. Keep up this important work. We need you.
—Jack Lander, inventor, mentor, author

I’m thrilled to see there are so many more female inventors in 2020 than there were in 1985. I hope my contributing to this vital publication (for the past 20 years) has helped, even if in a small way.
Whenever possible, I like to feature women inventors in my interviews. My goal is to encourage female readers to have the confidence, tenacity and perseverance required to develop those inventions! And thanks to Joanne Hayes-Rines for helping to start it all. Happy birthday, Inventors Digest!
—Edie Tolchin, writer, editor, author

Congratulations on 35 years, Inventors Digest! You keep the dream alive and motivate inventors to achieve their goals.
Thank you for being such a great resource for all of us. You are a wealth of information and inspiration!
—Lily Winnail, inventor, entrepreneur, actress

I first came across Inventors Digest in the library about 30 years ago. It was a great find, and I still read the magazine today. It has great advice for the new inventor as well as the experienced inventor.
No one invention strategy works every time, and Inventors Digest is constantly alerting readers to the new tools that are working today.
—Don Debelak, founder of One Stop Invention Shop, author and ID contributor

Congratulations, Inventors Digest!
I began my subscription in November 1992 and have read every copy since that time. Keep it coming; it’s the only thing out there that’s worthwhile for inventors.
—David A. Fussell, inventor, president of VenturSource Consulting

Happy anniversary, ID! We have grown up together, and as I reflect, Inventors Digest has been a consistent source for everything invention.
From novice to veteran, thank you!
—They, prolific inventor, December 2016 story subject

The digital age has created a challenging atmosphere for print publications. A 2009 report by Crain’s said that in that year alone, 367 U.S. magazines went out of business.

At 35 years, Inventors Digest has outlasted hundreds of magazines and compares well with other noteworthy national print publications.

A list of famous people in the entertainment and sports world who have graced the cover of Inventors Digest:

1998: National Inventors Month is established by Inventors Digest, the United Inventors Association and the Academy of Applied Science. Originally celebrated every August, the occasion was switched to May in 2011.