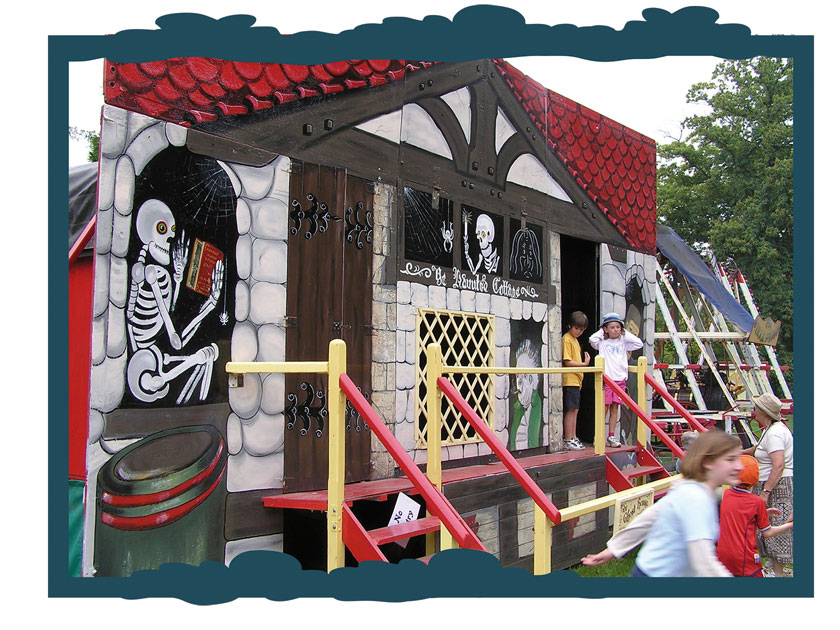 Since their commercial debut 100 years ago, haunted houses’ popularity is scary

Let’s start with a question to whet your appetite for this month’s What Do You Know? quiz,

True or false: There are more haunted houses in the United States than Target stores.

While you ponder that—and so as not to give away the answer by providing it so close to the question—consider that haunted houses are a $300 million industry in the United States.

So yes, it’s true; as of 2017, the Haunted House Association reported there were about 2,700 haunted attractions in the United States, a whopping 50 percent more than the roughly 1,800 Target stores.

It’s been a little more than 100 years since the Orton and Spooner Ghost House opened in Liphook, England, as part of an Edwardian fair. Americanhaunts.com is one of many sources that credit this as the first recorded commercial haunted house. The dimly lit funhouse, circa 1915, featured shaky floors and screams howling from phonographs.

Fittingly, haunted houses emerged in the United States during a dark time. Lisa Morton, author of “Trick or Treat: A History of Halloween,” told the Smithsonian that haunted houses began during the Great Depression as a way for cities to distract youths who were engaged in vandalism.

It would be another four decades before the category would gain pivotal momentum—and from a most unlikely source.

When most people hear the name Walt Disney, they think of warm and fuzzy characters such as Bambi, Pinocchio and Snow White. But Disney’s vast vision was such that he transformed the haunted house industry with the 1969 opening of Disneyland’s Haunted Mansion.

This was no Mickey Mouse operation. Among the attractions: a spectral sea captain, a ghostly wedding party, transforming portraits and a headless horseman.

Disney didn’t like the idea of a scary exterior for the mansion, opting instead for pristine visuals. He also decided to forgo the traditional walk-through mansion because park staff had trouble keeping the customer line moving.

What resulted was a “dark ride” in which people sat in trains called doom buggies and rode through the attraction. Micechat.com—a Disney-related site that celebrates the 50th anniversary of the ride with an array of photos—says “The Haunted Mansion is a big series of magic tricks that delivers on the promise of Disney ‘magic,’ unlike any other Disney attraction. Add to that a curious blend of mystery and weirdness and you have an enduring classic ride that’s beloved by generations of fans.”

Disney relied on a world of imagination besides his own. Special effects for the mansion were borrowed from 19th-century illusionists; others are traced to a series of Popular Mechanics books for boys.

His vision long preceded the mansion’s opening, dating as far back as 1951 by some accounts. In original artists’ renderings for Disneyland, built in 1955, a decrepit mansion and graveyard are seen overlooking Main Street.

Disney’s mansion was seen as technologically progressive at the time. A dizzying pace of subsequent advancements has played a major role in the exploding success of the haunted house industry.

As the popularity of haunted houses grows, so does the competition to provide the most high-tech thrills and chills. Many operators insist on the latest AV technology to ensure the most realistic experience in sight and sound.

According to the Haunted House Association, the thousands of house operators worldwide spend a combined $50 million-plus annually on their tech installations.

Jeff Schiefelbein, CEO of Sinister Pointe Productions, told the Los Angeles Times: “It’s getting so expensive that unless you have $100,000 to put into it and $30,000 into marketing, you are not going to make it.”

According to Nonprofit Quarterly, more than 80 percent of all U.S. haunted attractions are run by a charity or donate up to 100 percent of their proceeds to one.