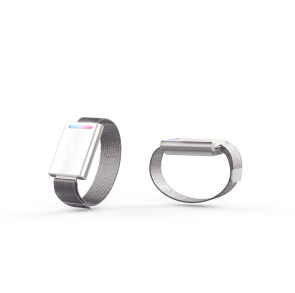 So many of us have been there, and at any time of year: You’re sitting inside an office, restaurant or theater where the air conditioning is running with such fury that you wish you had brought a parka.

MIT engineering students Sam Shames, David Cohen-Tanugi and Matt Smith were uncomfortable victims of this cold truth while working in the lab one summer.

“We just thought it was so ridiculous because the lab was empty most of the day, yet they were cooling it like an icebox,” Shames recalls. “If we could just heat and cool people directly, then we would be able to stay comfortable and maybe the building could even save energy.”

The future cofounders of Embr Labs had realized the genesis of the Embr Wave, which makes climate control more personal.

The Embr Wave is a wearable wristband that helps you control how hot or cold you feel via precise thermal sensations. A steel wristband with a magnet closure keeps it securely fastened.

The module provides heating or cooling to the sensitive area on the inside of the wrist, prompting your whole body to feel warmer or cooler. The device features an easy-to-use, single-button interface to control the temperature and can also be controlled via the Embr app. It lasts two to three days on a charge.

As the three set out to make prototypes, they were inspired by the old wives’ tale that running your wrist under water for a few minutes will cool the entire body. They built what Shames called their “duct tape” prototypes, a mix of off-the-shelf parts that were assembled together.

“What we discovered was that there are two dimensions of temperature”—what a thermostat is set to, and how that feels. “You can really have a disproportionate impact on how comfortable you can make someone, relative to the energy that you use,” Shames says.

The school publication, MIT News, got wind of the project and published a piece about it. The article went viral and was picked up by Wired magazine, among other outlets. The overwhelming response from readers and people inquiring about how to buy one was the first proof of a consumer need. The team formed a company to continue development.

Buoyed by reaction to the Wired article, the team marched toward launching the product. The initial, conservative projection was that it would take about six months to come up with a consumer-ready product. It took three years.

The hardest development challenge was getting the cooling to work well. Their invention uses a Peltier device—an electronic instrument that creates a cool area on one side and a hot area on the other.

It was difficult to dissipate the heat in cooling mode in such a way that it would not inadvertently warm the skin. It was also tricky to get a good feel to the user interface button on the device, but the team worked with adhesive manufacturing company Covestro to source a material that provided good results.

“We had to spend as much time and energy on the design and aesthetics and the look and feel as we did on the science and engineering, and that was why it took four years to get to market,” Shames says.

Intellectual property was a cornerstone of the team’s corporate strategy. The patent on the device was granted last year; the claims cover how thermal wave forms are optimized for the perception of hot and cold. Data collected from the device is also a vital component to the valuation of Embr Labs.

The company chose to run a Kickstarter campaign to launch the product. It had already raised investment dollars from Bose Ventures and Intel Capital to fund the development, so the platform was used as a market test.

The campaign, launched in fall 2017, raised more than $600,000 from 2,837 backers—blowing the team’s $100,000 funding goal out of the water. It was further validation for a product that was already highly anticipated.

Since the product launch, the team has continued to generate buzz. Time magazine gave the product honorable mention for “Best Invention of the Year,” and the Embr Wave has garnered rave reviews from customers.

Yet development has been unending. A new “fall-asleep” mode for the device was pushed to existing devices as a firmware upgrade in January, and a second generation of the device is in development.

The team is exploring how to optimize Embr Wave for other applications, such as for sleep and stress management. It coined the term “thermal wellness” and hopes the device will be widely adopted to help people live a temperature-optimized life.