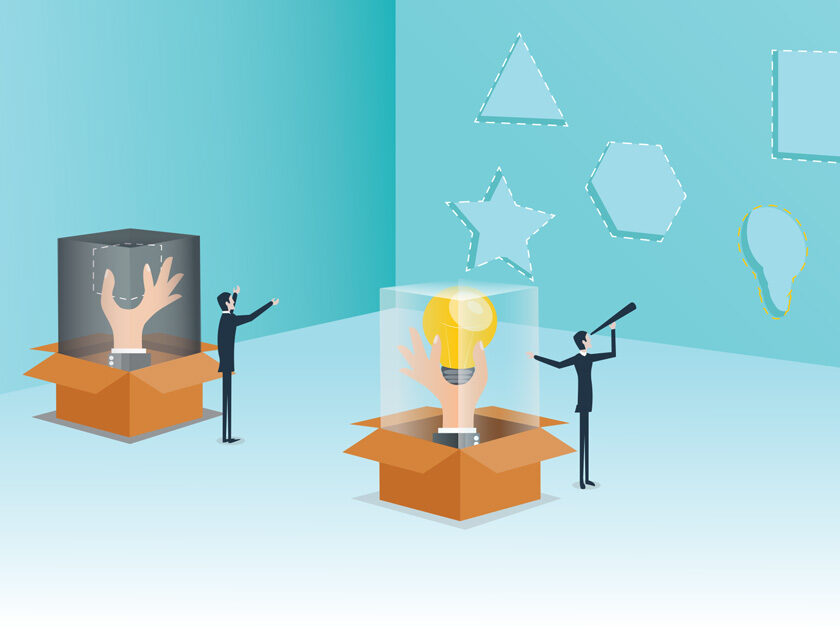 Inventors and entrepreneurs search for different things, but both aim to thwart competition

Inventors create a product and search for a market. For entrepreneurs, a gap in the market is more important than the product.

An inventor and an entrepreneur walk into a bar.

Each carries a small box. The inventor’s box is made of clear plastic and contains an invention. The entrepreneur’s box is opaque and contains nothing.

Bartender, to inventor: “What is that thing in your box?”

Bartender: “Are you selling them, or what?”

Inventor: “I’ve applied for a patent. I want to license it to a manufacturer.”

Bartender: “Aren’t you afraid someone will see it and copy it?”

Inventor: “Nah. I want to show it to as many people as I can. I want the world to know about it and recognize it as a great invention.”

Bartender, to entrepreneur: “And what’s in your box, or is that a secret?”

Entrepreneur: “My box is empty. I’m still working on what to put in it.”

Inventors tend to fall in love with their inventions. They create a portable mosquito exterminator that is in search of a market.

Entrepreneurs search for and find a gap in a market, and they create or find a product to fill the gap. If the entrepreneur falls in love, it is with the discovery of a market gap, not necessarily with the product that fills the gap. Both inventor and entrepreneur aim to delay, reduce or eliminate competition.

The inventor hopes to get a strong patent that provides protection against competitors for 20 years. But a patent is like a hunting license. It doesn’t stop competitors; it allows you to find and sue them to restore your right to forbid them from making and selling your invention. Sometimes you’re successful, sometimes not.

The entrepreneur hopes to create a product to fill a potential market need—and thereby delay or reduce competition using any or all of the following techniques:

The entrepreneur’s risk of competition starts with the launch of his or her venture. Being first in the market doesn’t prevent anyone from being second or third, and so on.

But most copycats can’t produce overnight. Reverse engineering of the product, creating drawings, and making tooling takes months during which the entrepreneur can solidify his or her position, and sell.

The inventor’s risk of competition starts with the publication of a patent and continues for about 18 years. Any person or organization can challenge an issued patent by legal means, or by making and selling the inventor’s invention as it is described in his or her patent.

The inventor can then sue to prevent such an infringer from continuing to make and sell the invention. However, unethical companies understand that most independent inventors do not have the finances to win in court.

The Moon’s the limit

Here’s a true story of how one entrepreneur made more than $1 million (equivalent to about $5 million in today’s economy) on one product.

Gerardo Joffe, a mining engineer in South America, decided to move to the United States. He found a job in New York City as a stock trader but dreamed of having his own business. He was fascinated with mail order and decided to try it. Many of the products he sold made money and many did not, but overall Gerardo made a comfortable living.

One day he came upon a small windup shaver made in Monaco. He bought one, tested it, and was pleased with the close shave it gave. He sold several and believed that the Monaco shaver had considerable potential.

He contacted its manufacturer and offered to buy a thousand every three months if he could become the sole distributor in the United States. A contract was signed. He advertised it and sold 200,000 over the next few years.

Then, to his surprise, he received a phone call from NASA, which had been testing the Monaco shaver for the astronauts’ use on their journey to the moon. He got permission to use the NASA logo in his ads and sold almost a million “Moon Shavers” before the novelty wore off.

Abercrombie & Fitch had been selling a small number of shavers before Joffe entered the market. But he was the first to sell only by mail order.

He eliminated competition by getting legal protection in the form of a contract to become the exclusive distributor in the United States. And he created highly effective advertising by obtaining NASA’s permission to use their logo. The name he gave it, the Moon Shaver, attracted attention and greatly increased sales.

I met Joffe at his office in San Francisco in 1979. He had come across my self-published book on resumé writing and job search, liked it, and contacted me.

We agreed on a deal, and he placed a large ad in the Wall Street Journal. Unfortunately for both of us, it was a flop.

So, what is to be learned about entrepreneurship at this point? Entrepreneurs love the adventure of searching for a product gap, not a specific product, and filling that gap.

Sometimes they discover a product that defines its own gap.   Either way, they gain satisfaction from the process of successfully marketing the right product at the right time. Their love is for the total process, and profit is almost incidental—a way of keeping score that proves their venture’s success. Certainly they must make money in order to live, but they must make it their own way.

But what about failure? How does the entrepreneur react to failure, such as the flop of marketing my book?

They accept failure as an entrepreneurial tactic. As one entrepreneur—I don’t recall his name—told me in my late teens, before my first serious venture: “Out of five ventures, two will be utter failures, two will break even or maybe make a few bucks, and one will succeed. That one pays off all of your losses and may make you rich.”

So, the entrepreneur must have the stomach for failure and perceive it as an essential element of a holistic success process.

Perhaps equally important, the entrepreneur must be continually searching for the next product gap. Just as Gerardo Joffe’s Moon Shaver eventually lost its luster, so will virtually all products have their day in the sun and fade. We can only delay the inevitable competition, or the fickleness of our once-eager customers.

We might say that inventors and entrepreneurs dream the same dream. Both hope to bring products to consumers who will receive benefits from such products.

The inventor begins with a vision of the product he or she must pursue, whereas the entrepreneur pursues an indefinite product in anticipation of its eventual definition.

The entrepreneur routinely deals with the possibility of failure. The inventor may be devastated by it.

“Success is not final, failure is not fatal. It is the courage to continue that counts.”