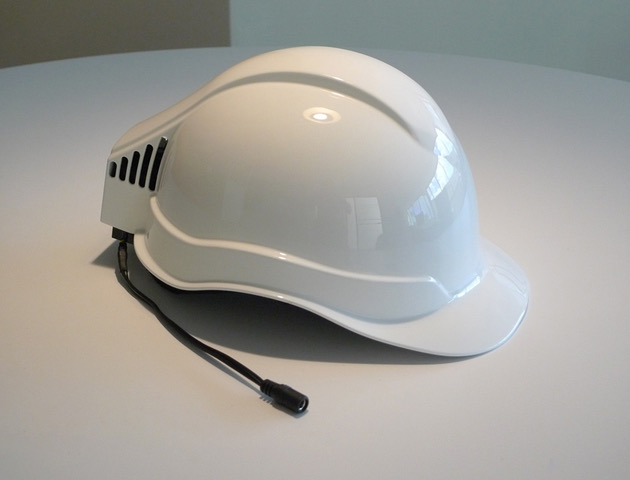 Construction helmets were a natural fit. There has been little innovation in the category, it is a huge market, and mistakes from heat-fatigued workers can be financially and medically costly.

Steve Feher has always been about literally keeping his cool, and has made a career of it. So his idea on a sizzling Hawaii day years ago was almost inevitable.

“Of course that is just the basic idea, and from there you work out the details.”

With the success of deploying his cooling technology into a motorcycle helmet, Feher adapted it to other helmet designs over the years.

Construction helmets are a natural fit. There has been little innovation in the category, it is a huge market, and mistakes from heat-fatigued workers can be financially and medically costly.

So, Feher used a similar layout to develop a prototype of the AC Hardhat. The device was to debut at the all-virtual 2021 Consumer Electronics Show, where he hoped to license it to a helmet manufacturer to deliver to the masses.

The AC Hardhat looks just like a traditional hardhat but has a protrusion in the back that houses a thermoelectric generator (TEG).

Sometimes called a Peltier device, TEGs are an electronic mechanism that creates a temperature differential between its upper and lower surfaces when provided a given voltage. Combined with a fan, the AC Hardhat moves cool air through special cushioning in the helmet and to the scalp.

The hardhat is powered by an external lithium battery that provides 2 hours‘ run time. The helmet itself weighs just 11 oz. and the whole system with the battery weighs just over 1 lb., making it nimble enough for use on construction sites.

The AC Hardhat is the latest in a long line of TEG-based technologies Feher has brought to market in more than 30 years in the personal cooling industry. He has 29 patents listed on Justia Patents.

His journey to create these devices started from a desire to sleep comfortably in his Hawaii apartment.

“I was living in a historic house, and the owner of the house didn’t want air conditioners on the outside of the house,” he said. “He said it would spoil the aesthetics of it. So I invented and designed the air-conditioned blanket.”

The blanket, made from TEGs, worked well at the start of the night. But it had problems when getting bunched up from movement. However, after the technology was patented in 1988, Feher was able to license it to a medical company for hospital environments to keep patients cool during surgery.

The AC blanket’s development provided revenue and kick-started his journey developing solid-state cooling devices for other applications. “I just really kinda went whole hog into applying thermoelectrics into all of these different issues.”

He applied the same principles to pillowcases, mattresses and even car seats, creating a powerful patent portfolio that he used to lock in licensing deals. The car seat version was licensed to major car manufacturers, including Ford and General Motors, and used widely for climate-controlled seating.

The first prototypes of the motorcycle helmet worked well, but there were challenges.

Feher used similar TEGs in the helmet as he used in other applications, so he had plenty of power. However, he had to keep the weight down to keep strain off the neck and get good air flow through the tight confines of the helmet.

He was able to put a connector on the helmet to use 12V power from the battery of the motorcycle. He found a spongy but open spacer material that allowed the helmet to provide comfortable cushioning yet open air channels to duct air to the head.

“The helmet acts as sort of an amplifier. So you put any kind of motorized thing on a full-faced motorcycle helmet, and it’s like being inside of a theater where the sound is,” he said.

To combat any odd harmonics, the manufacturer of the helmets used high-tech, double-balanced motor assemblies to keep stray vibrations and noise to a minimum.

Feher’s strategy is to develop and license his technology, so patents are a key part of the playbook. Intellectual property is the key asset he needs to help generate revenue. His AC Helmet, a precursor to his current invention, was patented on Oct. 18, 2005.

He focuses on filing utility and design patents in the United States and Europe, using patent attorneys with whom he has longstanding relationships to help with the filings.

Because he has intellectual property around such broadly-used devices, he has had issues with infringement. However, he has extreme depth of knowledge in his space and strong IP. He has always been able to fight off imposter products.

The undisputed king of personal cooling, Feher continues to work on integrating TEG technology into other impactful head-cooling applications that can be licensed and made into useful products.