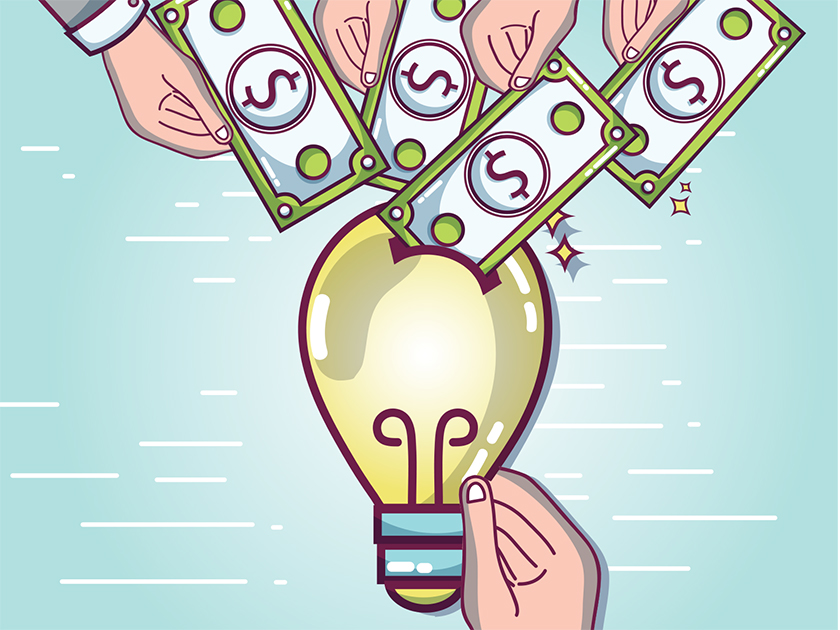 Even with good assets on your page, simply building a campaign is not enough

Although not a guaranteed method, crowdfunding can eliminate many different time and cost risks.

There are many misconceptions about crowdfunding sites, the best known being Kickstarter and Indiegogo. But first it’s important to review some of the basics, because crowdfunding is a great way to get your product to market (see the February 2017 Inventors Digest, which featured a crowdfunding theme).

One of the greatest things about crowdfunding is that it turns the traditional manufacturing model on its head—at least when it comes to consumer products.

In traditional manufacturing you have an idea for a product, make a prototype and then get quotes from factories for pricing. They’ll tell you their MOQ (minimum order quantity), the minimum number of pieces you must order before they’ll even make it for you.

So let’s say the product costs you $10 each and their MOQ is 5,000 pieces. Because you really believe in your product, you order the 5,000 pieces.

That’s $50,000. And you have to pay at least half of it upfront so the factory can purchase the materials to get started with production.

When your products are ready, you have to pay the factory the rest of the $50,000 you owe, ship the products to the United States, and find a fulfillment center to warehouse them and send them out. You’ll typically pay monthly storage and a variety of other fees.

In addition to all of the other costs that include prototypes/samples, website, incorporation documents, lawyer’s fees, patents and more, you now have to first try selling the thing to see if anyone even wants it.

Enter crowdfunding. It changes that dynamic by enabling you to first test the market to see whether there’s any demand for it. If there is, now you can go to a factory with an actual order in hand—and the money to pay for that order.

That’s right. If you hit your funding goal, you now make the product. Your backers or funders will have already paid you.

So even if you only sell 1,000 or 2,500 of your product, you’ll still probably have enough to pay for all of your manufacturing.

That’s a smarter way to do business. It really reduces your risk. Your only risk now is your time commitment working on your campaign and the money you spend to prepare it: for images, video, landing page, etc.

Now, on to those crowdfunding myths.

Myth 1: People are just donating money or getting equity/stock in your company.

No. I went through this with my own Kickstarter campaign. When I asked my friends if they knew what Kickstarter was, 90 percent said they did.

When I asked what they thought it was, the two most common answers were that they were getting equity in my company, or they were basically just giving me the money in the form of a donation.

It’s actually neither. It’s simply pre-ordering the product so that you can now, as mentioned above, go to a factory with money in hand.

That’s right. With Kickstarter and Indiegogo, people are just pre-ordering your product.

Myth 2: Building a campaign on Kickstarter means people are likely to discover my product and I will hit my goal.

I call this the “If you build it, they will come” thought process. That may have turned out to be true about building a baseball field in Iowa in the movie “Field of Dreams,” but I promise you that is no way to succeed with Kickstarter.

According to statista.com, the success rate of fully funding a project on Kickstarter as of April 2 this year was 36.84 percent.

I can’t tell you how many inventors over the past several years have said to me that Kickstarter is no good. “Why do you say that?” I ask.

And it’s almost always the same response. “I did one … and no one bought.”

“Send me the link,” I say. “I’d love to see it.” And that’s when it becomes clear why they didn’t succeed.

Usually their page is decent looking; the images are fine, the video is OK (sometimes not). These are what I call “the assets”—important pieces of the puzzle.

But when I look at what they raised during their campaign, it’s usually less than $1,000 and sometimes even less. And they blame Kickstarter or Indiegogo.

To succeed with crowdfunding, you not only have to build it, you also have to get people excited enough to buy the tickets. Imagine if you were starting a new basketball, football or soccer team and they just started playing games. Would the seats be filled?

Of course not. You would have to let potential fans know about this new team through advertising, publicity and coordinated marketing efforts.

Succeeding at Kickstarter takes a lot of work before you ever hit the launch button. Sure, the prototype and assets are important and must be good, but if no one knows about them, how can you hope to succeed?

Most inventors are afraid to share their new products with friends, family and acquaintances for fear of being judged negatively. “What if it doesn’t succeed?” they wonder.

But what if I told you, “If you don’t tell your friends and family and involve them in the process, the odds are really high that you won’t succeed”?

That’s correct. Having a great idea and even executing it are only part of the battle. You have to tell all of your friends, family, neighbors and acquaintances about it. As you succeed, you will then tend to rise up Kickstarter’s algorithm and have access to that traffic.

Myth 3: I should set my funding goal at the exact amount I want to raise.

Actually, even if you need to raise $50,000 to hit the manufacturer’s MOQ, you are generally better off setting your funding goal artificially lower—somewhere around $20,000-$25,000.

You rise up Kickstarter’s algorithm much faster if you hit a high percentage of your funding goal quickly. The quicker you get to that funding goal, the quicker Kickstarter regulars will see your campaign.

Even though I wanted to raise at least $50,000 when I launched DudeRobe, I set my funding goal at $25,000. When I hit that goal in two days, I then saw the benefit of Kickstarter traffic kicking in. I raised nearly $70,000 selling a bathrobe in June.

Another reason that works is that people like to back a winning campaign. If it doesn’t look like you’ll succeed, people may not be inclined to back you.

Myth 4: I have to decide whether I want to license my product or do a Kickstarter.

I know some companies that ran successful campaigns and then chose to license their product.

If you have a successful campaign and then don’t want to continue after your first production run, you’ll have a decent chance of licensing it because you’ve proven the market for a licensee and de-risked launching this product.

These are just some of the myths I’ve found when talking to entrepreneurs who either have done a campaign or are thinking about doing them. I’m a big fan of crowdfunding. It’s such a great way to get your product to market.

In my next article, I’ll share some tips and tricks to help improve your chances for success with crowdfunding. Don’t hesitate to comment or ask questions, and happy inventing!