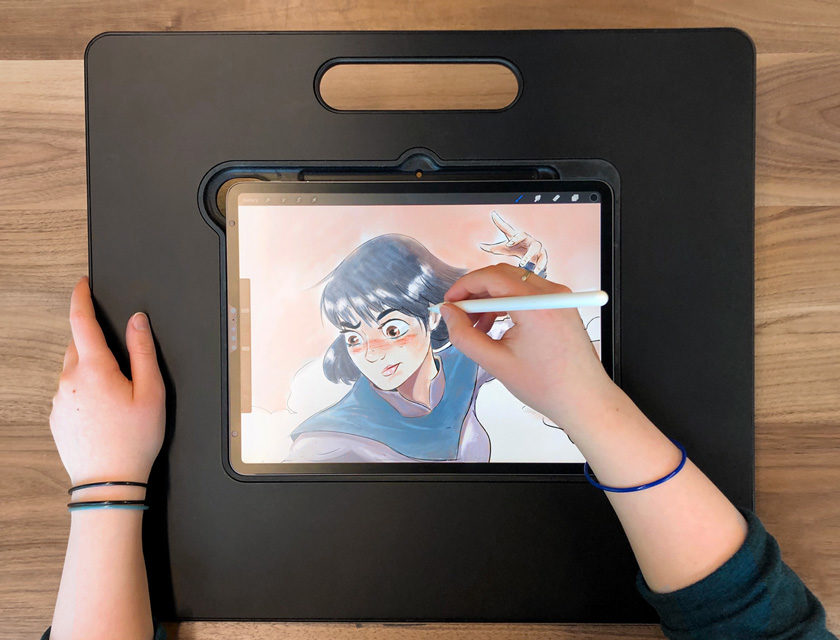 Professional artists develop iPad stand and holder for added stability, ease of use

JJ Harrison gave a Sketchboard Pro to Chad Hardin, DC Comics illustrator known for the character Harley Quinn, for a test run.  “He had it for a month and we were like, ‘Hey, can we get those back?’” Harrison recalls.

A pain in Bill Galvan’s shoulder ultimately led to some innovative relief for artists.

Galvan, who has worked on iconic comic characters ranging from Bart Simpson to Archie, is one of the lead artists at a Lindon, Utah-based studio called Braintreehouse. Founded by award-winning designer and artist JJ Harrison, the studio develops physical and digital games. It exclusively uses the iPad Pro line of tablet computers for work.

After a while, Galvan noticed that “when I started drawing on the iPad, I had this shoulder pain. I realized it was because I kept having to lift up my arm to make up the distance between the surface of the iPad and the surface it was on.

For years, tablet computers have solved artists’ longstanding challenges with working on paper—including the fact that there is no way to undo a misstroke. But these computers have their own problems. Users can be fatigued by holding them for long periods, and there is no place to rest the heel of the hand when you draw at the edge of the screen.

Frustrated by the physical fatigue of the medium, Harrison and Galvan developed a product called Sketchboard Pro to help.

Sketchboard Pro is an iPad stand for artists meant to provide a better physical experience for the illustrator. The board has a recess for the iPad to lay into and provides a perimeter around the screen. This puts the iPad screen level with the surface of the board and gives artists a complete workspace, as if they were at a drafting desk.

The product also features pop-out legs for an inclined workspace that can be used in either portrait or landscape orientation. The device uses magnetic plates to lock the iPad in place. It is compatible with most iPads that support the Apple Pencil.

From prototype to product

Galvan originally built a prototype out of cardboard to give the iPad a perimeter surface for his hand, creating a completely flat surface just as if a person was drawing on paper. He showed it to the rest of the studio, and everyone wanted one. Others joked that they should put it on Kickstarter.

The cardboard prototypes were great to prove the concept, but Galvan and Harrison needed some engineering help to turn the idea into a product.

A design firm in nearby Provo, Utah, called Rocketship, was able to help. Designers gave it a style to make it look more like an artist’s palette, and the engineers helped make it structurally sound.

3D prints of the device were used in the Braintreehouse office for testing. Harrison gave a Sketchboard Pro to Chad Hardin, DC Comics illustrator known for the character Harley Quinn, for a test run.

“He had it for a month and we were like, ‘Hey, can we get those back?’” Harrison recalls.

Feedback from Hardin and other artists was overwhelmingly positive. Nearly everyone they showed the prototypes to wanted one.

Utility and design patents have been filed for the Sketchboard Pro. Harrison and Galvan have seen their work bootlegged, resulting in lost revenues from the unlicensed use of their art, and wanted to have protection for their device.

Though it has been good for the brand to have pending IP, the duo feel it is only a matter of time before they see knockoffs on the market. They are working on building a strong brand and a quality product so they are the market leaders in the space.

The initial conversations about bringing Sketchboard Pro to Kickstarter never died, so Harrison and Galvan decided to use it as their launch point. They had experience with crowdfunding their card game “FMK: Twists of Fate” on Kickstarter and understood the platform;  they even told Hardin that he could keep the prototype if he let them use his testimonial in the campaign.

Sketchboard Pro, launched at the end of 2019, finished with $112,406 from 1,477 backers before moving to Indiegogo InDemand for additional pre-orders. After this success, they took the product to the renowned Consumer Electronics Show in January.

They attended pre-show launch events and exhibited in Eureka Park, the area of the show for start-ups, and received great media attention as well as fielding visitors from Amazon and Apple.

Harrison and Galvan looked into stateside manufacturing options but in the end decided to go with an Asian factory for production. U.S. factories were expensive to the point that the program would have to be canceled if that were the only option. They then looked to Alibaba to find factories overseas but had limited success finding a suitable factory to build it with the high quality they desired at a good price.

“This helps us in our studio to create great work, and we want all artists to be able to benefit from it,” Galvan says.

Eventually their design firm, Rocketship, was able to give them leads for trusted manufacturing partners. This led them to an ideally sized factory that is able to make the Sketchboard Pro economically and at the high quality they want.

The pair are working hard to fulfill their Kickstarter orders and build the business. Despite delays due to the coronavirus, at last word they were pushing to deliver pre-orders in the second quarter this year and expected to be in retail outlets this summer.

Artists at heart, Harrison and Galvan are desperate to put more energy back into their studio work. They are working to build a team to support Sketchboard Pro so they can get back to using the product to develop more games and digital products.