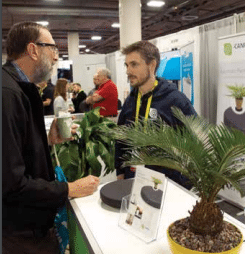 Excitement and endurance are all part of setting up at a trade show.

I put the box on the scale and watched the numbers on the digital readout rise as it caught up to the weight. Thirty, 40, 45 lbs.—just under the limit. The American Airlines representative looked up from her computer screen and asked for my ID and boarding pass.

As my sleepless eyes tried to focus on the box, for a moment I couldn’t remember what was in it. My brain finally caught up to the question and as the response left my lips, I knew there was going to be a longer conversation.

Clearly caught off guard, it took her a beat to recover. “What kind of stove?” she finally asked.

There are not too many reasons to lug a large appliance on a cross-country flight, but going to a trade show is one. Just hours before my arrival at the terminal, my old Giant mountain bike box was cut down to size to fit the Whirlpool stove and acrylic backboard that I was taking to Las Vegas for the Consumer Electronics Show (CES). After more than a month of long nights designing and building prototypes of the Inirv React stove safety device, it was time to show it to the world.

The representative asked whether there was gas in the stove. I told her no, that it was brand new and was being taken to a trade show for a demonstration.

That calmed her down. The baggage claim ticket was stuck on the side of the box, and I watched it slowly crawl on the belt and through the rubber-fringed hatchway. Then it was off to the security line and later my favorite pre-flight treat, Jamba Juice.

Eureka! I Found Our Area

CES is one of the biggest trade shows of the year, held annually in Las Vegas in early January. It has more than 2 million square feet of exhibit space and draws nearly 200,000 attendees from all corners of the globe. New technology from every major electronics company but Apple is on display; even though the show is four days long, there is no way to see everything.

CES is not open to the public. You must have an industry credential to register. I was able to register as a member of the media and had free access to the show.

The first challenge was getting to the show and setting up. It was a bit of a trick getting around the airport trying to balance the stove on my bag full of tools and spare parts. I was fortunate that my Uber drivers had the trunk space to accommodate it all. Unfortunately, my media credentials did not allow me into the exhibitor area to set up before the show started, so I had to wait until the show opened to get to the booth and do that.

Inirv was set up in Eureka Village, the exhibit hall for start-up companies and universities. It is one of the most exciting parts of the show, filled with 10-by- 10-foot booths boasting new products and the most outside-the-box ideas.

Eureka Village has a great vibe. Because all of the companies in that area are small and looking to grow fast, there is a lot of nervous, positive energy in the room. Everyone is looking to make a big splash or make the right connection for a big purchase order or partnership.

The Inirv booth was in the Smart Home section, at the end of a line of mostly French companies. Our neighbors were 42 Tea, a French smart tea company, and Blue Frog Robotics, a French robot company with a companion robot named Buddy. During the four days, we became friends in the same way you do with someone you sit next to on a long flight. You may have a nice conversation or borrow their pen, but you know you are likely to never meet again.

Exhibiting can become monotonous; it is a lot of standing and talking. During show hours, there is a steady flow of people coming to the booth and asking questions. After the first few hours, you get your pitch lean and precise and hear yourself saying the same thing over and over. Having a fresh bottle of water handy is essential to keep your throat from drying out.

Many visitors are tire kickers who just want a free pen, but others are industry insiders who may be great contacts. Exhibitors rarely get to leave their booths because you never know when the right connection will stop by. There are food courts in the exhibit hall, so there is no need to leave—but you don’t get to see the sun, either. Fortunately, there were four of us supporting the product, so we each had time to get away to see the show.

There are also pitches and meetings to attend. The inventors at my booth went to an open call for the TV show “Shark Tank” while I manned the booth. They also met with a retailer and a major manufacturer who were interested in their smart stove device. These pitches and meetings are a great way to get quality face time with potential partners, and can be more valuable than the hours spent at the booth.

There was little time to enjoy the sights. One of the days, the prototype broke down and I had to drag it and all of my tools back to my hotel in Henderson. I stopped by a slot machine on the way out of the Venetian Hotel, lost $5 in about 60 seconds, and gave up on gambling for the rest of the trip. Another night, my phone was acting up and I spent three hours in the glamorous Apple store inside Caesar’s Palace. There were parties and plenty of nightlife for show goers, but as an exhibitor you need to be sharp and avoid temptation. At the end of each day, the hall stays open for a few hours for exhibitors. Some people bust out a beer or some wine to recap the day—sort of like fishermen gathering at the pier at the end of a long day at sea. It is a peaceful moment to talk to peers and see whether anyone got any good contacts.

The show lasted through Sunday, but I had an early flight on that morning and missed the last day. The Inirv was well received by show goers and had a great opening week on Kickstarter. It was worth all of the effort.