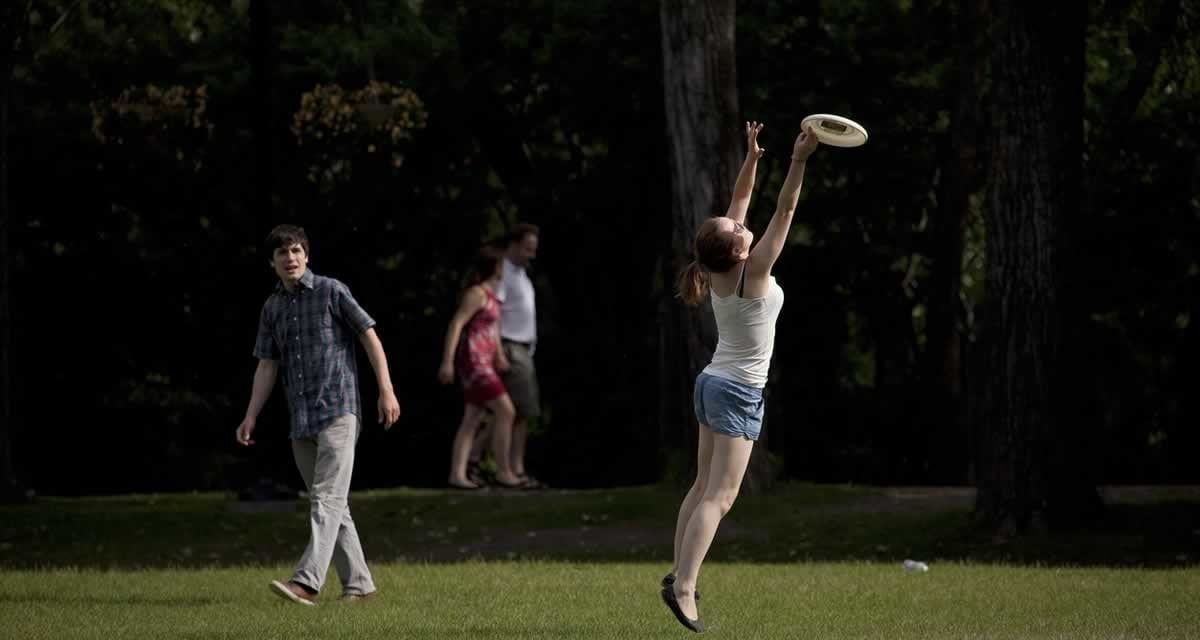 “We worked fairs, demonstrating it. That’s where we learned we could sell these things, because people ate them up.”

In earlier incarnations, it was called the Flyin’ Cake Pan, the Whirlo-Way, the Flyin-Saucer and the Pluto Platter. We now know it as the Frisbee—the ubiquitous flying disc at picnics, beaches and college campuses that glided past $100 million in sales a quarter-century ago and spawned Frisbee Golf and Ultimate Frisbee competitions.

The Frisbee’s inventor was Walter Frederick Morrison, who was always more of a Fred and was referred to as such. He was 17 when he and his girlfriend Lu Nay began flinging the lid of a popcorn tin back and forth during a 1937 Thanksgiving Day picnic.

Their impromptu creation was so much fun that it triggered Morrison’s inventor gene (his father developed an improved car headlight). Fred and his girlfriend began experimenting with other flat apparatus and determined that a tin cake pan flew better. They were flipping it to one another on a Santa Monica, California, beach one day when someone approached them and offered them 25 cents for it.

“That got the wheels turning, because you could buy a cake pan for 5 cents, and if people on the beach were willing to pay a quarter for it, well, there was a business,” Morrison told the Virginian-Pilot in 2007.

Morrison and his girlfriend married in 1939. Their novelty business couldn’t be counted on to pay all of the bills; he planned a career as a building inspector in the Los Angeles area before World War II interrupted. While serving with the United States Army Air Forces and flying P-47 Thunderbolts over Italy, he schooled himself on aeronautics.

Morrison was shot down and held captive for 48 days at Germany’s infamous Stalag 13, according to the London Telegraph. He survived that ordeal and resumed work on his flying disc invention, leading to the aeronautically improved Whirlo-Way in 1946. With the financial help of Warren Franscioni, another former pilot, the discs were molded into plastic and ultimately sold as the “Flyin-Saucer”—a way to cash in on the fascination with UFOs during that time.

“We worked fairs, demonstrating it,” Morrison told the Virginian-Pilot. “That’s where we learned we could sell these things, because people ate them up.”

Further improvements ensued. In 1955, Morrison unveiled the Pluto Platter, incorporating his final and ultimate design: flat and round, with a raised central hub that included the names of the planets in raised plastic around the rim. The throwing instructions, molded into the underside, were written by Lu Morrison.

The Pluto Platter’s success brought out the showman in Fred. According to an anecdote reported by the New York Times following Morrison’s death in 2010 at age 90, he would tell prospective buyers during demonstrations that the disc was gliding along an invisible wire. To prove it, he offered to sell fairgoers 100 feet of the wire for a dollar—with the Pluto Platter thrown in at no extra charge.

By this point, Morrison had an interested buyer in the Wham-O Corp., a toy and sporting-goods manufacturer based in Emeryville, California.  The company bought the rights to the Pluto Platter in 1957 and changed the name to Frisbee a year later, a reference to the fact that Yale students had earlier hurled tins from the Frisbie Pie Company in Connecticut.

Morrison grumbled all the way to the bank. “I thought the name was a horror,” he recalled in an interview with The Press Enterprise of Riverside, California, in 2007. He changed his tune later in life upon collecting royalties that reached into the millions of dollars.

He also had the satisfaction of being the disc’s sole primary inventor. Morrison was awarded United States patent No. 183,626 for his “Flying Toy” in 1958. (Ed Headrick, Wham-O’s head of research and development, later added grooves to the top of the Frisbee’s surface, patenting more aerodynamic improvements to the disc that became what it is today.)

The Frisbee’s fascinating aerodynamics captured the attention of more than people and pets at backyard, park and beach gatherings. The United States Navy reportedly spent nearly $400,000 in 1968 to study the behavior of Frisbees in wind tunnels as part of a program to test a prototype flare launcher.

Morrison also invented the Crazy Eight Bowling Ball and the Popsicle Machine—a plastic form that could be filled with juice and frozen—for Wham-O. Neither were nearly as successful as the Frisbee, but Morrison lived well off his royalties and spent much of his later years breeding racehorses and flying airplanes.

Nine years before he died, he co-wrote a book, “Flat Flip Flies Straight! True Origins of the Frisbee,” with Frisbee enthusiast and historian Phil Kennedy. Upon learning of Morrison’s death in 2010, Kennedy released a brief statement that wished his friend “smoooooth flights.” —Reid Creager