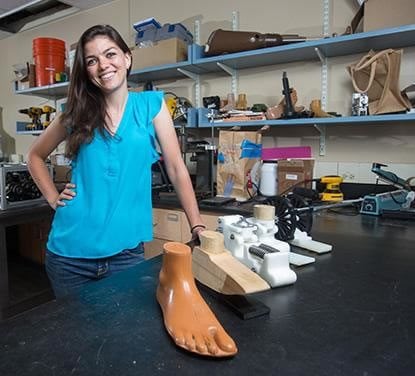 A drone technology advance that was once unimaginable. A customizable, add-on system for wheelchairs. And yes—a FitBit for pigs.

The winners and their inventions

Apoorva Murarka invented an electrostatic transducer that replaces larger magnet and coil systems found in devices today using nanotechnology. About 1/1,000th the width of human hair, the transducer produces higher-quality sound and results in longer battery life because it uses less energy. Apoorva is a PhD candidate in electrical engineering at MIT.

Natasha Wright developed a solar-powered desalination system that removes biological contaminants, making water look and taste better for use in places such as India and Gaza. She’s pursuing her PhD in MIT’s Global Engineering and Research Lab.

SwineTech’s SmartGuard is essentially a FitBit for pigs. Matthew Rooda and J. Abraham Espinoza founded SwineTech to commercialize SmartGuard in 2015. No, SmartGuard doesn’t track steps taken and calories burned for pigs; it tracks data such as efficient piglet growth, individualized feeding and the health of the mother pig. Most important, it helps combat an urgent problem in the pig farming industry: piglet mortality. SwineTech’s invention alerts the mother pig with a gentle vibration when it detects piglet squeals to prevent crushing.

University of California, Berkeley students Tomás Vega and Corten Singer created WheelSense, a modular, customizable add-on system for wheelchairs that provides spatial awareness for visually impaired users so they can identify obstacles. They plan to disrupt the expensive market for assistive technologies for the disabled community by making their technology open source. Tomás and Corten want to make this technology available to the largest audience.

Tony Tao, a PhD student at MIT, made advances in drone technology that no one previously thought was possible. He invented Locust, a small, lightweight UAV that can be deployed from aircrafts by the dozens or even hundreds. The drones—the size of a dollar bill and weighing less than a soda can—can work in coordination to swarm a large patch of sky and communicate crucial information to the ground.

Katy Olesnavage, an MIT PhD student, invented a process for designing high-performance, mass-producible, customizable prosthetic feet that come close to a biological foot. A Michigan native who attended a public school with a 60 percent graduation rate, Katy taught herself math and enrolled in college-level math and physics courses while in high school.

Lisa Tostanoski, a National Science Foundation Graduate Research Fellow in the Jewell lab, is combining immunology and engineering to address the shortage of effective and specific therapies for autoimmune diseases. These include multiple sclerosis.

A team of three Stanford students called Lyseia is working on novel protein drugs to kill “superbugs” (multi-drug-resistant, gram-negative bacteria). Christian Choe, Zach Rosenthal and Maria Filsinger Interrante make up Team Lyseia. Multi-drug resistance to bacteria is expected to supplant cancer as the leading cause of death globally by 2050. As major pharmaceutical companies shy away, Lyseia is fighting these infections.