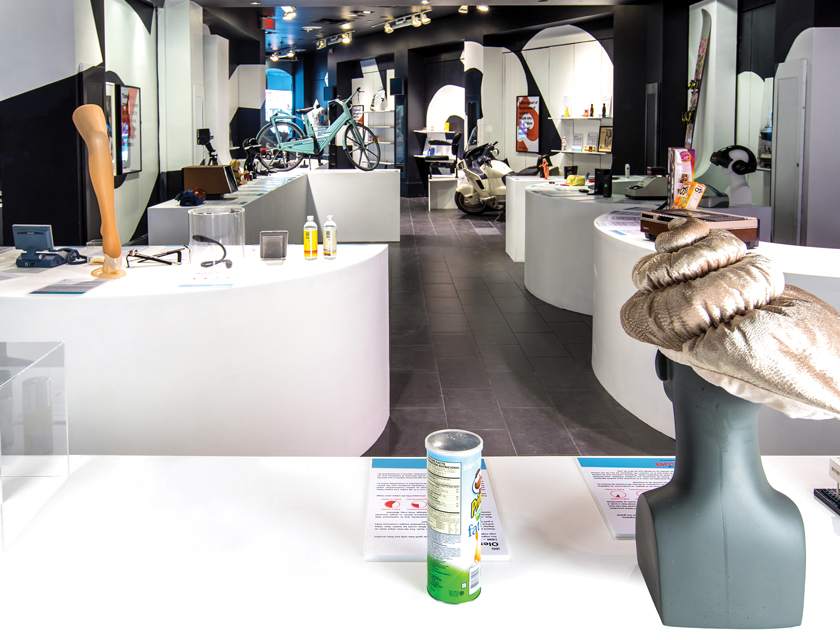 “Humor is an essential part of many of the stories of failure at the museum.”

Thomas Edison was a prolific and enthusiastic failure. Legend has it that he failed 10,000 times before perfecting the incandescent electric light bulb. The first of his 1,093 patents, for an electrographic vote recorder to be used by governing bodies, was not a successful invention.

The most iconic inventor of all time chose to view failure in the context of his life’s mission—discovery: “I have not failed. I’ve just found 10,000 ways that won’t work.”

Dr. Samuel West gets it. The curator of the Museum of Failure is an expert on the subject as a licensed psychologist and PhD in Organizational Psychology who has given many international speeches on the subject.

“Successful inventors already know that progress is made via failure, he told Inventors Digest. “But I think they, too, need to remind themselves that there are different grades of failure.

“Good failure is done in the name of progress. Bad failure that should never be accepted is failure due to sloppiness, incompetence, et cetera.”

The Museum of Failure—an international touring exhibition of failed products and services that spends 2-4 months at each location, with a smaller pop-up that is hired for innovation experts or company events—doesn’t make those distinctions. It simply reminds us that failure is often inevitable, necessary and fascinating.

Dr. West long thought “of new and interesting ways to present the exciting research on the fear of failure as an obstacle to innovation, and how difficult it is for organizations to accept failure. But I wasn’t making much progress.

“Write a book? TED talk? Do some seminars? Nah … those were not terribly exciting options.”

His inspiration came during a vacation with his family in Zagreb, Croatia. “I stumbled upon a small museum, the Museum of Broken Relationships … so interesting. It was there and then I decided to open a museum of failure. I received funding from the Swedish Innovation Authority and opened the first exhibition in Helsingborg, Sweden, in Summer 2017.”

His idea has continued his lifelong success with failure.

“It’s been a crazy ride. The global media attention was insane and the museum grew quickly with donated objects, companies wanting to collaborate.”

The worldwide attention is such that Dr. West said most companies are good sports and happy to be featured in the museum. These include Microsoft, IKEA and Procter & Gamble.

“We started with 80 failures and now have nearly 200,” he said. “The most recent donation is an Amabrush, a revolutionary toothbrush. Many unhappy crowdfunders. You gotta Google it to see what it looks like.”

Dr. West said both failure and success can be misunderstood, especially when our modern culture tends to measure the latter in terms of monetary wealth and personal recognition on social media.

“The whole notion that people can be failures is a rather new concept,” he said.

“Before capitalism, failures could only be in terms of an event being a failure. But once we started evaluating people in terms of how ‘valuable’ they are to society which is the exploiting capitalist, we started seeing certain people as failures also.

“It is interesting that society looks up to (Tesla CEO) Elon Musk or (Amazon CEO) Jeff Bezos as successful merely because they have made a lot of money. This is only one aspect of life. Are they happy? Are they successful parents? Good spouses? Good citizens?

“We are far too focused on money as the measure for a successful life. I guess it is easiest that way; money is easy to count. The other factors are not easy to measure.”

“This is one of my favorite projects that we tour for a multitude of reasons,” said Eric Leong, associate producer and manager of licensing at SEE Global Entertainment. “Failure is fascinating.

“Society’s obsession with success can be seen from the marketing we are bombarded with to our social media fees to the pressure parents put on their children from an early age. And there’s nothing wrong with celebrating success, but I wish we celebrated failure as well.

“It’s been my experience that life rarely takes a straight path from point A to B. The journey along the way can be equally as interesting to the destination.

“It can also be funny as hell.”

For that reason, Dr. West oversees the project with a fun spirit. He wants this to be a part of the museum’s identity.

“Humor enhances learning. It also gives us a bit of perspective and allows us to approach what otherwise would be a more painful and sensitive subject.”

He sees humor in failures such as Betamax, Apple Newton, Blockbuster and New Coke. But even some of the biggest flops helped inspire improvements that led to more viable products.

Leong noted: “The straight-up ‘What were they thinking?’ exhibit items like Bic for Her or the Shared Girlfriend are objectively hilarious. But stories like the Apple Newton eventually contributing to the iPhone or the Ford Edsel confounding drivers of its era with technology in the steering wheel, a feature that is commonplace today—those stories stick with me after I walk out of the exhibit. I also really like that the exhibit continues to add items and evolve with each show.”

An added feature at the exhibits is The Failure Confessional, which invites museumgoers to write their biggest failures on a huge board. Much of the contributions are fun. Some are poignant reminders of regret and missed opportunities.

“The visitors to the exhibitions are not looking for mindless entertainment, so we get some very interesting people,” Dr. West said. “For many, the failure confessional is just a fun thing … write something funny and take a photo to share on social media.

“But for others it is an emotional experience, a time of reflection, of accepting what is and owning up to one’s failures. Most of the failure confessions have little to do with innovation, but they nonetheless offer insight in how we often avoid accepting our failures.”

Some posts to the board that he remembers:

Struggle—not necessarily failure—was a painful reality for the museum in 2000 after COVID-19 hit early in the year.

Dr. West said the publicly funded exhibitions and museums don’t provide any numbers, but the commercial ticket-driven exhibitions drew more than 25,000 visitors pre-COVID. The smaller, pop-up (1-7 days) version of the museum has been all over the world and larger events, with no tangible way to determine how many have seen it.

After March 2000, “Well, COVID sabotaged everything. It went from 100 percent full steam ahead to zero. I even sent myself emails just to see if my email actually worked.

“One difference is that much of the collection is now available on our site. But things are picking up, and we now have exhibitions scheduled for the San Francisco Area, Las Vegas and Taiwan.”

Leong said the exhibit will “hopefully inspire our visitors to fail more often and with gusto. I don’t want to guarantee it’s going to change someone’s life … but it might!”

For inquiries about Dr. Samuel West as a keynote speaker or more information on the exhibit and mini-popup for events, [email protected]

1 New Coke: This bittersweet saga, chronicled in the January 2020 Inventors Digest, is one of the most controversial marketing episodes in recent memory.

Coke reintroduced its classic formula after just three months; New Coke was renamed Coke II in 1992 and the newer brand was discontinued in 2002. Pundits are split as to whether New Coke was a marketing disaster or an ingenious plan to keep Coca-Cola in the news.

2 The DeLorean (DMC-12). The Eighties brought us New Coke, padded shoulders for women, the mullet—and this space-age clunker in the 1985 movie “Back to the Future.”

The first prototype was actually built in 1976. The DeLorean’s engine was weak, the woefully undertrained workforce at the company’s Northern Ireland factory resulted in a poor build, and John DeLorean was arrested (and later acquitted) on drug trafficking charges in 1982.

3 Google Glass. When megacorporate arrogance marries a poorly conceived invention, there will be ugly children.

Google Glass—basically a computer worn on the head like eyeglasses, including a camera—debuted with a $1,500 price for a limited period in April 2013. The device displays information in a smartphone-like, hands-free format. Wearers communicate with the internet via natural language voice commands.

Google Glass looks, well, ridiculous, and the camera has caused concerns and even altercations from people afraid they were being filmed without consent. The device was banned in several places. The Museum of Failure refers to it as “The Evil Eye.” Users have been called “Glassholes.”

4 Rejuvenique. Former “Dynasty” star Linda Evans should have stopped her endorsement career with Crystal Light. This beauty mask not only looks more like Crystal Dark, many reviewers have reported an unpleasant sensation while their facial muscles are purportedly being toned with electricity in 15-minute intervals.

The Museum of Failure cited one review in which the user said the mask “feels like a thousand ants are biting my face.” And Yahoo! Life published this comment, which was as strange as it was unbelievable:

“As I was using it, I started to feel drowsy. I started to feel ‘controlled,’ as if some demon was possessing me. After 2 minutes, I don’t know what happened, I woke up in a corn field in my underpants and covered in blood. I do not recommend this product.”

5 Olestra. Museum of Failure curator Dr. Samuel West says “I never get tired of telling the story of Olestra”—the fat substitute that was included in some brands of potato chips.

Calorie counters rejoiced as the Food and Drug Administration approved the additive in 1996. Then the s*** hit the plan.

Because the body cannot absorb Olestra, many users reported side effects that included gastric cramps and diarrhea. Sales also went down the plumbing, from $400 million in 1998 to half that two years later.

A study by professor Ronald Jandacek at the University of Cincinnati revealed that Olestra had a possible link to reducing PCBs, a known carcinogen. Meanwhile, products containing Olestra can still be bought at stores in some countries.

The Blonsky birthing table. This item is from the Museum of Failure blog. In 1965, a married couple got a patent for this device in which a pregnant woman is strapped onto an electro-mechanical device that is rotated at high speed until the baby is propelled into a basket.

U.S. Patent No. 3,216,423, “Apparatus for Facilitating the Birth of a Child by Centrifugal Force,” was patented by George and Charlotte Blonsky. Mr. Blonsky, a mining engineer, was not a father but was reportedly fond of children.