Fort Knox for Your Frozen Treasures 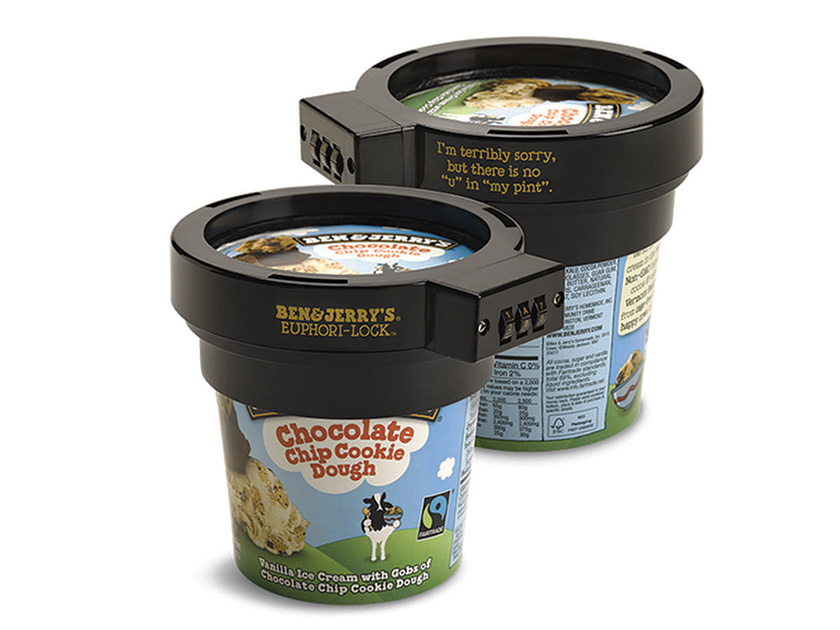 A sample project proposed by the creators is an alarm clock that charges you in Bitcoin every time you hit the snooze button. The device is as easy to program as an Arduino, and applications can be tested in just minutes with a few lines of code.

The device launched on Kickstarter in August and quickly passed  its $20,000 fundraising goal. Early crowdfunding backers could get it for $69, with shipping set for March.—Jeremy Losaw

Ben & Jerry’s Pint Lock is a fun, direct message to ice cream poachers at home or work. It’s “about as close to Fort Knox as you can get for your frozen treasures,” the company says—ignoring the fact that a thief could poke holes into the container or just steal the whole thing, combination lock included.

Grace Maloney is an accomplished inventor and entrepreneur as she begins her senior year at Freedom High School in South Riding, Virginia. She co-founded a company called Grow Greenly and helped developed a self-fertilizing plant pot and business model that will bring the product to market. The goal is to eliminate plastic pollution and the need to use chemical fertilizers. Her team competed at the IncubatorEdu competition this summer and won first place in the National Pitch competition, receiving a grant for $10,000. Several years ago, her school robotics team developed a life jacket, the Floodie, that won a state championship research award and received a patent.

1 True or false: Copyright infringement can be a felony.

2 Which of these celebrities never had a patent?

D) Jamie Lee Curtis
E) All of them were issued a patent.

3 Which was invented first—AstroTurf, or the Zamboni ice resurfacing machine?

4 True or false: A name or title can be copyrighted.

5 How much does it cost to become a licensed NFL vendor?

1. True. It can be a felony or misdemeanor, depending on the extent of the violation. If, in any 180-day period, an infringer has made 10 or more copies of one or more copyrighted works with a total retail value of $2,500, the standard for felony prosecution has been met. 2. E. 3. AstroTurf was invented in 1965; the Zamboni Co. was founded in 1950. 4. False. A name or title can be trademarked. 5. D. You must secure a minimum of $100,000 to meet the royalty guarantee required by the NFL. You also must have three years’ manufacturing experience and must buy a comprehensive commercial general liability policy, among other requirements.