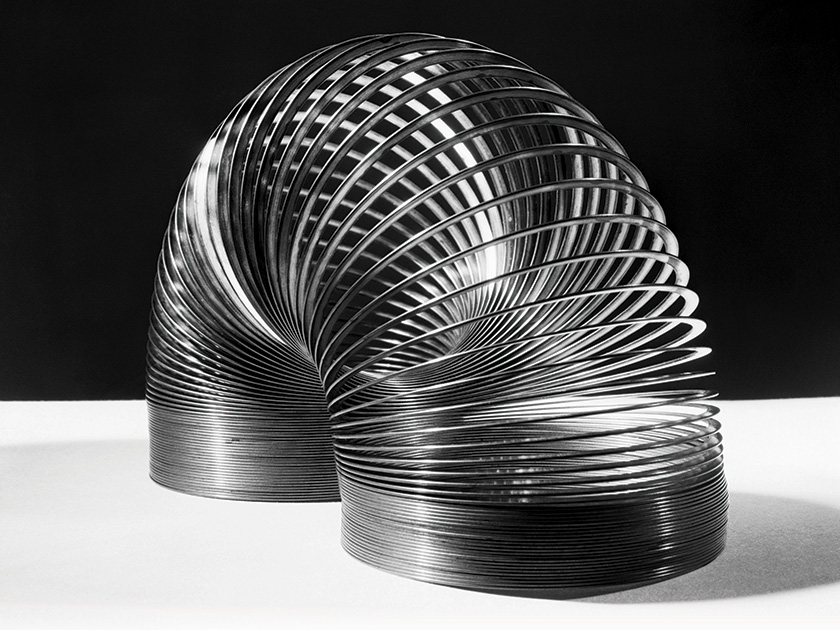 Iconic slinky was an accidental discovery, abandoned by its inventor

Type the worlds “accident” and “definition” on a major search engine, and the first entry says: “an unfortunate incident that happens unexpectedly and unintentionally, typically resulting in damage or injury.”

But what about accidents that are not unfortunate? The Slinky springs to mind.

It was 1943. Richard James, a naval engineer, was trying to develop a meter for measuring horsepower on naval battleships. During his work with tension springs, one of them fell from a shelf to the floor.

The spring didn’t stop moving when it landed, briefly “walking” along the floor. An idea for a children’s toy was soon put into motion.

James spent the next two years trying to determine the best steel gauge and coil to use for his toy. According to theinventors.org, James’s wife, Betty, found a name for the invention after seeing in the dictionary that the word “Slinky” is a Swedish word meaning traespiral—sleek or sinuous.

The toy’s viability was cemented at Christmastime in 1945, when the nervous couple unveiled the Slinky at Gimbels department store in Philadelphia. Their anxiety disappeared when 400 sold for a dollar apiece in 90 minutes.

“A Slinky just sitting there isn’t very exciting. It has to move,” Betty James told CNN.com in 2001. “It if hadn’t been for Gimbels giving us the end of a counter to demonstrate, I don’t know what would have happened.”

Richard James’s engineering background doubtless helped when crafting language for the patent, in which the Slinky is described as a helical spring toy that can walk down an inclined plane or flight of steps without the application of external energy. The toy was designed to have a low natural frequency between 10 cycles and 100 cycles per minute.

The patent also describes the importance of coiling the spring steel without substantial compression or lateral force tension to support the free movement of the spring.

Richard James was the initial impetus for the Slinky, but his wife played a much more prominent role in keeping the toy alive.

In 1960, the couple founded the James Spring & Wire Co. with $500 and began production. To this day, all Slinkys are made with the original equipment designed and engineered by Richard James. Each one is made from 80 feet of wire.

That’s where his association with the toy ends. Shortly after cofounding the company, he left his wife, six children and the company to join a Bolivian religious order. He had donated so much to the order that the company was on the brink of collapse.

Betty James took over as CEO, moved the company from Philadelphia to its current Hollidaysburg, Pennsylvania, location—while scrambling to make arrangements for their children and stay in their lives—and started an advertising campaign that included the famous 1960s Slinky jingle (youtube.com/watch?v=EZL6RGkPjws).

She eventually replaced the Slinky’s blue-black Swedish steel with silver-colored U.S. metal and added spin-offs to the line. Richard James died in 1974; Betty James died in 2008, seven years after becoming one of few women to be named to the Toy Industry Hall of Fame.

Well over a quarter billion Slinkys have been sold worldwide. “No batteries, nothing to wind up,” Betty James was quoted as saying in the Los Angeles Times. “These new toys on the market are lovely, but not everyone has $40, $50, $60 to spend on a child.”

How Does It Work?

To the casual observer, the way a Slinky walks down stairs is pretty straightforward. The science behind it isn’t. According to the Slinky Physics Teacher Guide for the educational television program “Newton’s Apple”: “As the Slinky moves down the steps, energy is transferred along its length in a longitudinal or compressional wave, which resembles a sound wave that travels through a substance by transferring a pulse of energy to the next molecule. How quickly the wave moves depends on the spring constant and the mass of the metal.

“Other factors, such as the length of the Slinky, the diameter of the coils and the height of the step must be considered to completely understand why a Slinky moves as it does.”