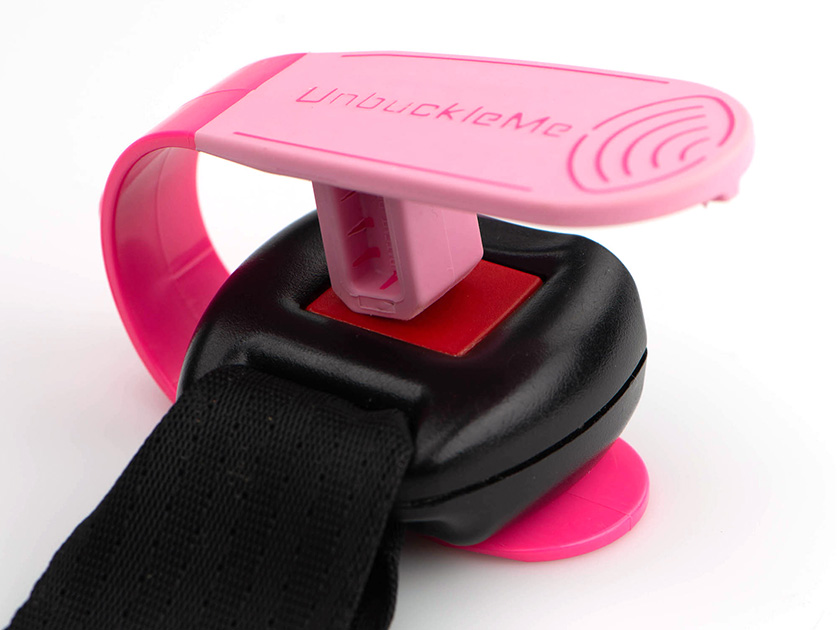 It’s frustrating enough when we struggle with a seat belt buckle during those occasional times on a plane. But opening a car seat buckle is something many parents do virtually every day.

Barbara Heilman and her daughter, Becca (Heilman) Davison, experienced that frustration routinely when Barbara—a new grandmother—had trouble pressing her granddaughter’s car seat buckle because of arthritis in her thumb.

Davison, who gave birth to her first daughter in 2015, recalls: “She couldn’t take my daughter out of the house for fear of getting stuck somewhere and not being able to get my daughter out. My mom, who is also an occupational therapist, quickly thought of a tool that would solve her own problem.”

UnbuckleMe is a device that fits perfectly around the square buckle on a seat belt. To operate it, slide the thin plastic base of the device under the buckle; for square buckles, it is designed to snap into place. Then stabilize the base with your fingertips and pinch the two ends together.

This leverage reduces the force required to open the buckle by more than half. (U.S. motor vehicle safety standards and regulations require buckles to have a minimum release force of 9 lbs. so they can’t be opened by children.) Then, pull down and away from the buckle so it releases.

“When I saw what she had invented I was intrigued, and had heard from friends whose parents had similar challenges,” Davison says. “We decided to bring our product to market to help anyone else who struggles with car seat buckles. As it turns out, there are a lot who do.”

Heilman’s work background, in which she often made splints and other assistive devices for patients, made her comfortable with creating handmade solutions. Because splint material is pliable, the early prototyping came naturally to her.

“She actually has a full box full of over 100 prototypes that she made, as she came up with new iterations and ways to improve the design,” Davison says of her mother.

However, the transition from a handmade prototype to a digitally designed version took more time. “We worked with several engineers to translate the properties and qualities that we knew we needed (such as rigidity in the handle and flexibility in the arm) into the form of a computer-aided design, which was required for manufacturing. This process took about six months before we were ready to order our tooling with our manufacturer.”

Ensuring the safety of the product for kids was an obvious priority, though absent some of the requirements for car safety devices.

“Because UnbuckleMe is an accessory that does not attach to the car seat, it has not been crash tested with car seats. We strongly recommend not to attach this product to the car seat in any way,” Davison says.

“The product has been tested for lead content and passed all required levels for children’s products. It is also BPA free. I am a certified child passenger safety technician (CPST) and have strong support from the child passenger safety community that this product contributes to safety, ensuring that all adults can safely operate car seats.”

Grandmom and daughter filed their patents in 2016, with a rough prototype in hand.

“The U.S. is a first-to-file country, so we knew that it was important to file as soon as possible to protect our intellectual property. We have been very glad that we did,” Davison says.

The process took about 2 ½ years before they received their utility and design patents early this year. They have additional patents pending.

Davison says UnbuckleMe is ideal not just for those with arthritis or carpal tunnel syndrome.

“It is also great for moms with long fingernails who are tired of breaking them on car seat buckles!” she says. “And if you have 4-to-6-year-olds who are still in a 5-point harness and want the independence to be able to unbuckle themselves, you can pass back UnbuckleMe to give them the power.

“Just keep it in a safe place when the car is moving, out of reach of kids. Every family with young kids has someone who struggles with car seat buckles, and this product will make life easier.” —Reid Creager

A Centers for Disease Control study found that, in one year, more than 618,000 children ages 0-12 rode in vehicles without the use of a child safety seat, booster seat or a seat belt at least some of the time.