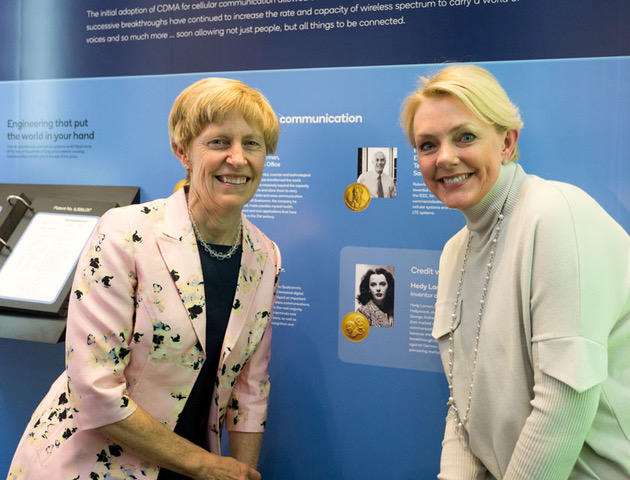 Much work ahead in helping more women and minorities get patents

Qualcomm, instrumental in the SUCCESS Act, has commissioned research that provides Congress with information to enhance patent diversity.

That’s the ratio of inventors awarded United States patents in 2016 who are women, according to a February 2019 report by the United States Patent and Trademark Office. So more than half of the country’s population is dramatically underrepresented in a process that is inextricably linked to prosperity, opportunity, achievement and America’s economic standing in the world.

This could be the most important statistic in inventing—even in the realm of intellectual property. And another report by the USPTO, released last October, confirms we don’t have enough information about this to know why.

The USPTO and Congress are working to improve opportunities for innovation and access to the patent system by women and minorities, but there is much work to be done. Companies’ and others’ voices are beginning to assume a prominent role in uncovering solutions that will prevent so much innovative talent from being left behind.

To find the best solutions, there is an urgent need to ask the right questions.

That impetus began with the SUCCESS (Study of Underrerpresented Classes Chasing Engineering and Science Success) Act, a bill passed in 2018 that directed the USPTO to study and report to Congress on the number of patents applied to and obtained by women, minorities and veterans; and by small businesses owned by those groups. The USPTO transmitted its findings to Congress last October 31.

The most impactful takeaways:

The gaping patent gender/minority gap is enabled by holes in the collection of data. Laurie Self, Qualcomm’s senior vice president and counsel of government affairs, says that during the patent application process, the USPTO “doesn’t collect the data that would help us understand where the gaps are, especially for minority patentees.

“New proposed legislation would empower the USPTO to collect demographic information, which along with more interagency cooperation and data sharing would go a long way with helping everyone understand the size and scope of the problem, and to track our progress toward greater diversity in patenting.”

“If you can’t measure it, you cannot improve it. And this lack of research and reporting on patent applicant demographic data makes it difficult for policymakers to advance legislation that will foster inclusive innovation.”

Qualcomm—which built a coalition that was instrumental in the passage of the SUCCESS Act— has commissioned research that provides congressional committees with information to champion this issue. Among that research was a 2016 study by the Institute for Women’s Policy Research on women and patenting, which found that at the current rate of progress gender patent equity is more than 75 years away.

One of the few demographic conclusions in the October USPTO study was that most female inventors are found in tech-heavy states and those with a larger female workforce. But Self cautions against making assumptions tied to a particular technology or discipline.

“Intellectual property is critical to a wide array of fields, including scientific and engineering disciplines such as health care, manufacturing, wireless technology, computer software, chemicals and countless others,” she says. “Patents are also critical for protecting inventors who toil in their garages or at their kitchen counters.

“We should be encouraging inventors from every background to pursue patents. Some of the same principles for female inventors in tech apply to other potential patenting areas.

“For example, strong role models and informal networks help inventors in every field succeed. The federal government can also help by providing more grants to female and minority inventors, and ensuring those grants are widely distributed geographically. Where you live should not determine whether or not you get to be an inventor.”

Another fact uncovered in the USPTO’s February 2019 study is that there is a larger share of female patentees in coastal states such as New York, Massachusetts and California. Self says this information can be leveraged.

“Certain states have significant patenting activity due to a higher concentration of innovative R&D companies and universities. We can use these states as a good model—including the deep networks of female scientists and potential inventors—for other states to follow.

“And there’s hope for the future. (Economist) Alex Bell and his colleagues at Harvard have found that children who are exposed to innovation in their youth are more likely to become inventors later in life. Promoting innovation in many parts of the country can go a long way toward a more geographically distributed innovation base.”

Qualcomm’s efforts with the USPTO and Congress have provided important momentum in bridging the patent gap. Self notes that the company has made many recommendations to Congress and the USPTO about ways to incentivize women inventors.

“It all starts with ensuring we really understand the problem,” she says. “We were encouraged by the latest recommendation coming out of the SUCCESS Act that called for more interagency cooperation and more research and data gathering related to diversity among patent holders.

“We also support the IDEA Act, bipartisan legislation that would require the USPTO to collect data from inventors voluntarily—when they apply for a patent. One of the recommendations coming out of the SUCCESS Act report is to have Congress specifically target funds to promote invention and entrepreneurship among underrepresented groups, including women. At Qualcomm, we think this would be an important step toward empowering more women inventor-patentees.”

A lack of resources has played a major role in suppressing female inventing. The cost of filing a patent, often around $10,000 or more, can be a major deterrent.

“Certainly, better access to patent lawyers, reduced USPTO filing fees and other resources would help reduce the barriers to applying for patents,” Self says. “Moreover, venture capital funding and other investment are critical for inventor-patentees to bring patented ideas to market, but right now, only about 2 percent of venture capital funding goes to women-owned businesses.

“But it’s important to remember that the idea of resources goes beyond just funding and other tools to help businesses. Many of these resource allocation challenges would improve if more women were seeking and obtaining patents in the first place.”

“We need to address the structural causes of the gender gap and the sociocultural barriers to female patenting,” Self says.

Andrea Ippolito, director of Cornell University’s W.E. Cornell program, a guided entrepreneurship and leadership program for women in STEM, agrees. She says patent issues for women “are the same obstacles that women battle in the workplace ats large—systemic gender discrimination and lack of access to institutional resources in mentoring in the right fields.”

Ippolito was a witness at the House Committee on Small Business Hearing, “Enhancing Patent Diversity for America’s Innovators,” on January 15. She said the growing number of women in STEM fields hasn’t translated into increases in female patent inventors. “The real gap comes from the rate of women involved in patent-intensive fields such as electrical and mechanical engineering. We also see far fewer women seeking patents in private industry than in the academic sector.”

Self says the fact that colleges and universities have comparatively few female professors “really gets to the heart of the structural issues when it comes to female participation in STEM fields as well as pursuing patents.

“Women need role models that they can look up to and go to for guidance. They need to see people like them who have had similar experiences and overcome similar barriers in pursuing their dreams. With fewer female professors, more women lose out on those role models and that mentorship opportunity. Plus, it deprives women in the STEM fields of the kinds of networks that are important for growth within the field (through internships, jobs, etc.) and, if they want to pursue patents, are critical for inventor-patentees.

“Moreover, female professors tend to patent less than their male counterparts, preferring instead to focus on teaching and publishing. Ensuring that patenting and commercialization activities are weighted more heavily in tenure and promotion decisions will help to ensure that women who are on the tenure track have the same opportunities as men to pursue innovative activities.”

Congresswoman Velázquez, along with U.S. Rep. Steve Stivers (R-Ohio), Sen. Mazie Hirono (D-Hawaii) and Sen. Thom Tillis (R-N.C.), introduced the IDEA Act in Congress. In leading the House Small Business Committee hearing in January, she noted the potential financial benefits for small firms and the national economy if the patent gap for women and minorities were narrowed.

“Applying for and obtaining a patent allows small firms to gain access to capital, find licensing deals and level the playing field with larger competitors—all of which lead to jobs and economic growth,” she said. The severe underrepresentation of women and minorities in the patent process “not only hurts these groups, but the economy as a whole.

“Reports show the U.S. GDP would grow by 4.6 percent if more women and minority inventors were included in the patent system. This is particularly troubling for low-income communities and rural America that are already suffering from being on the wrong side of the digital divide.”

She cited findings from Michigan State University economist Lisa Cook that only six patents per million are attributed to African-American inventors. Additionally, children who are born to high-income families are 10 times more likely to get a patent than children from below-median income families.

Velázquez also called for better congressional support of STEM initiatives and the Small Business Administration’s Small Business Innovation Research program to address the lack of diversity in the technology sector. She cited studies showing that 75 percent of girls who have participated in hands-on STEM activities are empowered to seek careers in technology, adding that government programs like SBIR have helped boost participation by women and minorities.

Women hold less than 20% of U.S. jobs in technology—a prime source of patents—with only 5% in position of leadership at tech companies. African Americans hold less than 15% of tech positions, Latinos 14%.

Less than 3% of venture capital-backed founders are black or Latino.

India’s patent office recently announced that it will expedite examination if a patent application has at least one female inventor. But don’t look for a similar initiative in the United States.

Qualcomm’s Laurie Self, quoted extensively in the main story, says India has a “noble” idea. But “given our current politics, and the lack of research into the gender gap in patenting that we’ve discussed, I’m not optimistic that something similar could happen here.”

However, she adds that empowering more female patent-inventors and providing more information about the enormous untapped potential of female inventors “could help encourage legislators and other policy-makers to look into ways that smart policy changes could empower female inventors.”