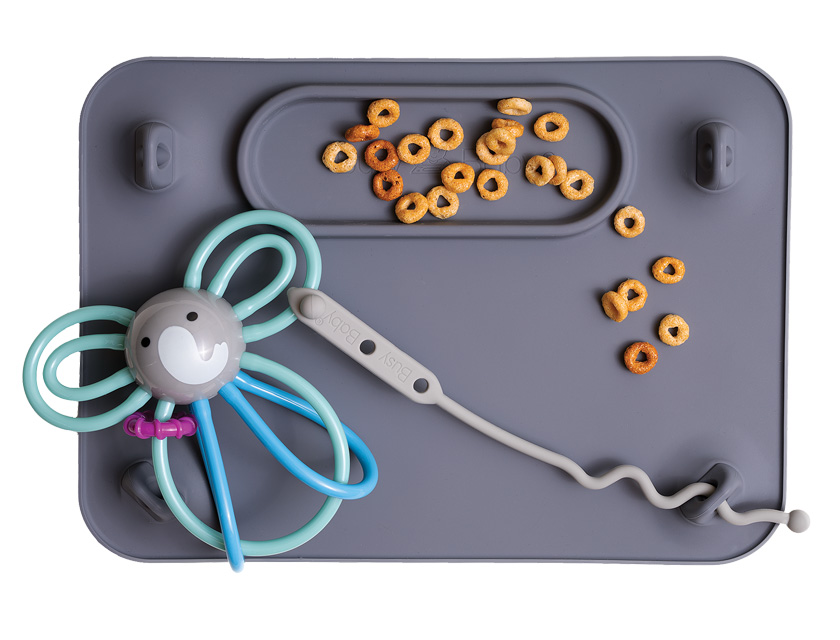 So many new gadgets are available for parents and caregivers, many of which I’ve covered recently for Inventors Digest (Grabease, October 2020; Curious Baby Cards, January 2021; The Crawligator, March 2021; Totes Babies, June 2021).

So, how does one begin to determine what is truly useful? The Busy Baby Mat is.

Ever have your baby or toddler get bored with sitting, eating, or playing in his or her high chair? Invented by Beth Fynbo of Oronoco, Minnesota, the Busy Baby Mat holds utensils and playthings that will not land on the floor or in your lap. And easy-peasy cleanup!

Edith G. Tolchin (EGT): How did your invention come about?

Beth Fynbo (BF): I came up with the idea for the Busy Baby Mat shortly after my first son was born. I had gone out to lunch with a couple of girlfriends and their little ones, and I watched as the moms struggled to keep things out of their baby’s reach and give them something acceptable to play with—only to have those items thrown directly onto the ground.

I immediately went online to try to find something that would keep my son entertained when we went out so he wouldn’t be such a distraction. It needed to be something to keep his toys within reach and provide a clean surface for his food. There were plenty of pacifier-type clips and several kinds of placemats but nothing that did both things I was looking for.

I started by cutting and gluing things together at home to make my own mock-up. I made a second version for a friend who had a baby.

One day she told me that she had forgotten her “mat thing” the night before, and it was a nightmare. She said she didn’t realize how useful it was until she didn’t have it and told me that I had to “make that thing for real!” Just over 15 months later, my product was in the hands of real customers.

EGT: What are your various products?

BF: My first product was the Busy Baby Mat, which is a 100 percent food-grade silicone placemat that has four suction cups embedded into the corners on the bottom of the mat. It also has a tether system that allows parents to attach items to the top of the mat for their baby to play with.

This year I released another new product, the Busy Baby Teether and Training Spoon. The Teething Spoon is also 100 percent food-grade silicone and is designed to be used as both a teething toy and a spoon. I designed the training spoon to hook up to the mat’s tethers easily so babies can practice self-feeding without constantly dropping the spoon. We’re soon launching a smaller version of the mat as well.

BF: My “Shark Tank” process started early in my entrepreneurial journey. I received an offer from Lori but ended up walking away from it.

Her plan was to take 18 percent of my company and license it to Munchkin. Her plan was not in line with the vision I had for my company at all. I want to grow the product line and the business and was hoping to have her help me get into the big retailers. It just wasn’t going to be a good fit.

Since I filmed that episode last fall, my brother has joined the business full time, and we are having a blast working together and growing the business ourselves.

EGT: Have you invented anything before the Busy Baby Mat?

BF: I’ve been a problem solver my entire life, so I would say I’ve probably “invented” plenty of solutions. However, this is the first time I’ve ever taken an idea to market.

EGT: Are you manufacturing in the United States or overseas? Have you encountered any production obstacles?

BF: We are currently manufacturing overseas because the cost is significantly higher in the United States. As a 10-year Army veteran, I’d like nothing more than to manufacture here.

BF: I work with an American company in China that helps me with the entire process. They helped me find a reputable third-party testing agency and send samples directly to them for testing with each production run. My factory produces other products for children under 3, so they are really familiar with the safety standards and processes.

EGT: What about patenting?

BF: The patent process was scary to me in the early days. It’s hard to invest the kind of money that it costs to have a patent written when you aren’t even sure if the product will be a winner and sell. I’m glad I invested the money in a good attorney.

Our first patent was written with nine months of filing. Now I have two written patents in the United States, plus nine more pending, and a utility model written in China. The first knockoffs have already begun to show up on Amazon, and we’ve been able to have them easily removed because we have our patents.

EGT: Have you had any glitches during product development?

BF: I think there are always glitches in every process. The glitches help you continue to grow and get better. We haven’t had any major setbacks, but I think that is because I work with product developers who also work with my factory, so they have the manufacturing process at top of mind when they develop the products.

Some developers will simply make whatever your vision is, but if it can’t be manufactured efficiently, it’s just a cool drawing.

EGT: Will you add to your product line?

BF: We will be modifying our design to create products for a different market. The concept is great for those with disabilities and for the elderly in assisted-living facilities. We will make the mat bigger and redesign the tethers for adult use.

EGT: What guidance do you have for developing inventions?

BF: My first advice to anyone with an idea is to go talk to complete strangers about that idea before spending any money developing it. Identify who your target customer is going to be and find those people, tell them what you’re planning to do, and ask them if it is something they would buy.

If they say yes, find out how much they would pay for it. That’s going to give you a good idea if that project would be worth spending money on and moving forward with.