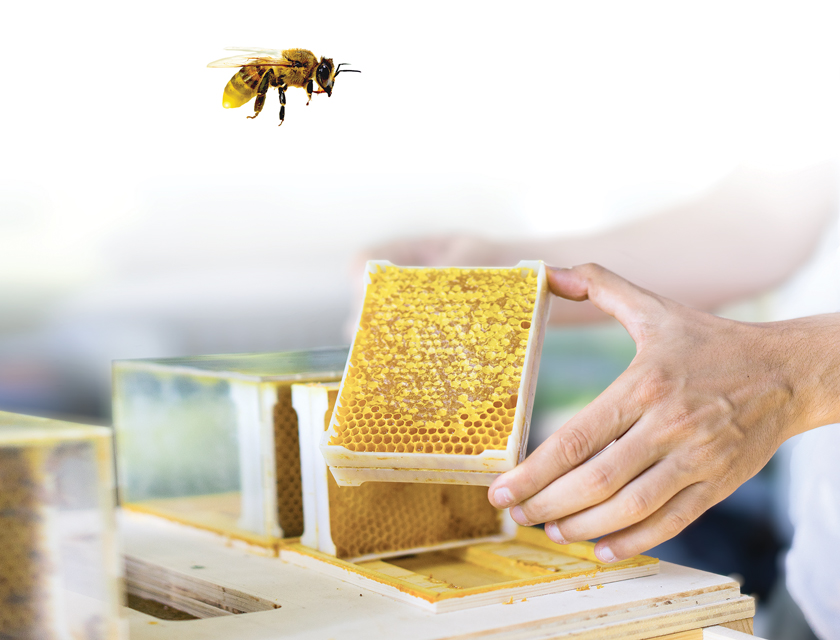 “We get a lot of requests from people that want to have a beehive, but they feel a bit scared.”

Did you know that bees are the deadliest attacking animal in America?

That’s according to worldatlas.com. (Yes, bees are technically an insect, and yes, deer are actually No. 1 on the list, but that is in connection with vehicle crashes and not attacks.)

Bee stings account for more than 60 deaths ever year, per the Centers for Disease Control and Prevention. So beekeeper and inventor Roberto Pasi sought to make a home beekeeping system that would greatly reduce people’s fear of being stung.

Enter the B-Box, a primarily wooden beehive system with a goal of being easier and safe to use at home and in urban areas.

The only way bees can get into and out of the hive is through a chimney 2.2 meters off the ground. This ensures that humans stay out of their flight path and keep from unintentionally aggravating them.

The patent-pending honeycomb system keeps the living area and  honeycombs separate from each other. When a lever is pulled, the bees can leave the honeycombs but cannot get back in. Once they are gone from the area, the honey harvesting can be done without the need for special equipment and does not risk crushing the bees–as in traditional bee hives.

The combs are set inside of clear plastic housings so users can observe the bees at work and monitor honey production. A wooden cover keeps the area dark and hospitable for the bees when not being observed.

Pasi’s relationship with bees began two generations ago. His grandparents were beekeepers in the Italian countryside who passed along their knowledge and skill of honey production.

Pasi’s first beehive-related product was an IoT device with an app called BeeSecure that allowed monitoring of conditions in beehives and had a GPS tracking system to track stolen hives. He also ran a program that studied pollution and air quality by analyzing honey.

Through these endeavors, he worked closely with bees and beekeepers and recognized that more people would participate in the activity if not for the clumsy equipment and fear of being stung.

“We get a lot of requests from people that want to have a beehive, but they feel a bit scared,” he said.

So he set out to create a hive that would work for humans and bees—especially because bees play an immensely important role in the ecosystem and in our survival.

Beyond the production of honey, bees are key pollinators for myriad crops—including most fruits and leafy greens. However, due to pesticide use, viruses and pathogens, bee populations are declining. Fortunately, these issues are being recognized, resulting in a strong movement to save the bees by reducing chemical use and providing them with habitats in which to thrive.

As part of this movement, people are starting to set up hives at their homes to support honey production and help bee survival. But the fear factor is an obstacle.

It took three years and 10 major prototype iterations before the B-Box project was launched. Pasi and partner Gabriele Garavini started by trying to make something elegant and low profile that would merge into the urban environment in a nice way.

“We are Italians. We tried to … design something pretty,” Pasi said.

The first prototypes were made from wood and had metal legs. They looked great but had two major problems.

The first was that the cost of goods for the design was more than 1,000 euros (about $1,200 U.S.), which was too high for the market. The second problem was ordinances about keeping bespoke beehives in urban areas in Italy, and the entrance to the hive had to be above head height.

So they went back to the drawing board. The metal legs were removed in favor of an all-wood structure, and they created a chimney to satisfy the regulations but also keep the bees farther from beekeepers.

B-Box was successfully launched on Indiegogo in 2019. Pasi was rewarded with $342,377 raised by 470 backers between the primary campaign and the on-demand campaign that followed.

He and Garavini used feedback from supporters to update the design by adding a wooden blockout plate to cover the clear plastic that housed the main hive. This keeps bees darker and cooler.

The B-Box’s novel features are patent pending in Europe. Pasi plans to extend the coverage to other major parts of the world, including the United States, once that intellectual property is issued.

“Patents are super powerful. When you are a little startup, it helps you to feel safe—also against the giants that are always more powerful than you from a marketing point of view. It is a little weapon.”

Once the crowdfunding campaign was complete, Pasi began working on manufacturing. He eventually had orders for 500 units and started contacting different companies to help build the B-Boxes.

He went to five different manufacturers around Italy before settling on one that had great quality at a reasonable price. The team then updated the design in small ways to reduce the cost of goods, taking cues from IKEA furniture in the way that the wood panels were made and fit together before units were ready for shipment.

The team continues to push forward. All crowdfunding backers were delivered product; now the plan is to work to increase sales and find new sources of venture funding to grow the business.

Design updates are in the works. The team is looking for a way to make B-Box more economical for buyers on other continents, particularly in the United States.