Going With the Flowbee 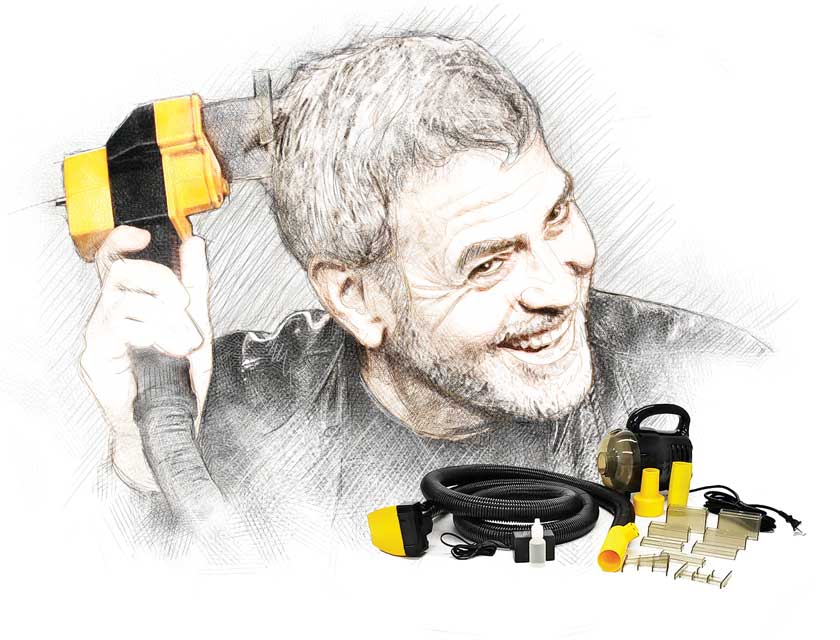 “Stop it! You don’t use it!” an incredulous Tracy Smith said to George Clooney during a “CBS Sunday Morning” interview that aired last November.

Like anyone who ever spent any time around the superstar actor, she didn’t know what to believe.

The TV reporter was astonished when Clooney told her he uses a Flowbee to cut his hair. He said he had been using the device—a vacuum cleaner attachment that comes with 10 plastic spacers—for 22 years.

This is a man who once pulled a hideous painting out of the garbage, signed it, claimed he had painted it, gave it to a friend and enjoyed seeing it on his wall for five years while the obliging friend cringed. Practical jokes are who he is when he isn’t playing someone else.

But Rick E. Hunts probably didn’t care whether Clooney was serious or not.

Hunts got his patent for the Flowbee in 1987, when he was a carpenter in San Diego. At one point he was reportedly selling the hair vacuums out of his car.

He began marketing them in 1988 via cheesy informercials that paid off. Sales reached 2 million units by 2000. In addition to the product’s low cost, convenience and do-it-yourself savings, the vacuum all but eliminates any cleanup issues; astronauts have used similar devices in space so that stray hair does not interfere with sensitive electronics.

Flowbee is based in Kerrville, Texas, according to its website—the same website that crashed late last year from massive activity after Clooney’s revelation and subsequent demonstration of the Flowbee on a late-night talk show, the latter proving he wasn’t kidding. The fact that many barbershops and salons were closed at the time due to COVID-19 made for a marriage of perfect timing.

(How fixated is the public on comments made by celebrities? Last December, a YouTube video by a four-man group calling itself “The Behavior Panel” discussed verbal and body language clues to determine whether Clooney was telling the truth. At last count, it received 67,874 views.)

A company Facebook post last December 7, eight days after the “CBS Sunday Morning” spot, showed a photo of Clooney. Underneath, it said:

“We’re not going anywhere—just working very hard to get our products back in stock for those of you who’d like one. To all of our valued customers that have used & believed in this amazing product of ours for the past several decades, and the new customers that are sure to come—we’d just like to say Thanks & Stay Safe!”

No more selling from the car

Internet records show Hunts, 66, has most recently lived in Eagle Point, Oregon. Inventors Digest’s request for comment from him was not returned.

It’s safe to say that between the Clooney endorsement and the Delta variant of COVID-19 threatening to close some barbershops and salons again, Hunts is a busy guy.

Earlier, Troy Hunts, vice president of Flowbee, told TMZ: “The actor’s public shout-out in support of the product resulted in sales going up tenfold” due to what he called “the Clooney Effect.”

You have doubtless read in this magazine that celebrity testimonials don’t automatically guarantee marketing success. But the Clooney Effect here was different because not only is he almost universally liked, his comments were an organic part of a non-commercial interview—resulting in a seemingly unintentional partial infomercial.

The hairs on the back of Rick E. Hunts’ neck must have been standing up.

U.S. Patent No. 4,679,322, “Hair Clipper,” begins with this abstract (short summary): “A precision hair clipper for cutting the hair of a subject to a uniform length which comprises a housing defining a flow chamber attachable to a vacuum hose.”