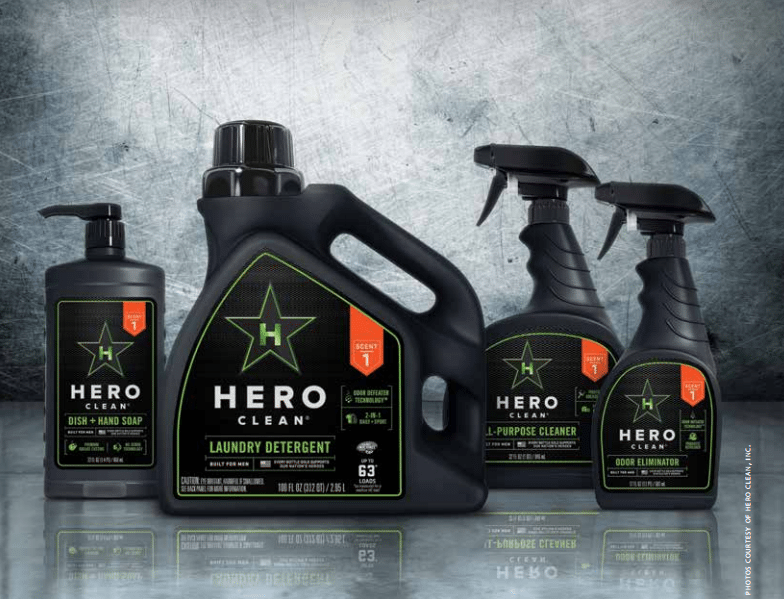 Mike Eaton of Hero Clean, Inc. has branded his product line Cleaning Products Made for Men. Starting in August 2015, Hero Clean’s product line was on the endcaps of 16 Target stores in  California, poised to go into select stores on Long Island. Eaton’s 3 1/2-year journey from idea conception to Target shelves was more complicated than he expected, but his lessons can benefit
every inventor.

Inspiration
Eaton’s story started when he would open laundry detergents to see which detergents had the least offensive odors. He couldn’t take the heavy fragrances of many brands and wasn’t looking
for the cover-up fragrance idea. Eaton came to the inspiration that every cleaning brand in the store was made for women, fragrances were added for women, and that there weren’t products
geared for men.

With a check of the internet, Eaton found some pretty powerful statistics: 47 percent of U.S. adult men (18 and older) are single; the average age of a male getting married is 29; 47 percent
of first marriages fail; and 42 percent of second marriages fail. The result is that 42 percent to 43 percent of purchases are made by men. Eaton figures that 70 million to 100 million men
buy cleaning products.

Lesson 1: Have Clearly defined target market with an interesting story.

Defining the Product
Eaton studied men’s habits and needs for cleaning products. One aspect was to look into cleaning products that better fit men’s sweat pH and bacteria that are more associated with men than
women. Men also need stronger surfactants (the chemical group that gets out stains and perspiration in clothing, and loosens food from dishes) and longer-lasting, much milder-smelling fragrances (to deal with lingering bacteria odor without an overpowering scent). The other aspect Eaton considered was the number and type of cleaning products men prefer. He found men like
easy-to-use products and all-purpose products that can do many tasks. Eaton determined men needed four different products:
• Laundry detergent
• Dish soap
• All-purpose spray cleaner
• Odor eliminator

Creating the Product
Eaton identified a great market, but the question was how to develop the product. The answer for him was to turn first to the suppliers—in this case, the ingredients industry.

Manufacturers in the ingredients industry are always working to trying to get more business. They do this by developing new formulations—including their products, of course—that address
some of the market issues their customers face. Eaton was able to get ingredients companies to supply him with new formulations that he was able to evaluate. Because he is a marketing person
specializing in brand building, he wasn’t comfortable dealing with all of the technical aspects of the proposed brand so he hired a chemist familiar with the cleaning industry to help in the
final formulation.

Many of the major ingredient companies weren’t willing to help; they didn’t see Eaton as major customer. Eaton had to find smaller companies, so he investigated trade shows. The most helpful
shows he attended were the International Cleaning Experts Expo and the American Cleaning Institute show, where ingredients companies exhibited.

LESSON 3: Take advantage of the supply network for product design. Concentrate on smaller companies that are more likely to help a new inventor-led company.

Testing
Eaton used a rather large network of single friends to do performance testing. He gave them samples and told them to see whether the product worked. These tests went well. This was not
unexpected; Eaton’s earlier work with ingredients manufacturers allowed him to use formulations for which there was a substantial body of data indicating the formulations would be effective.

Eaton’s products used different formulations. Those cleaning chemicals can react in unexpected ways over time. He needed to test the product to ensure it had a long shelf life. Big retailers such as Target also require cleaning vendors to be a WERCSmart vendor. WERCSmart is an organization that helps retailer participants select quality products with chemical formulations.

Eaton wasn’t in a position to do this testing on his own. Instead, he used testing capabilities as one of his criteria in selecting a contract manufacturer, who did most of the testing. Testing revealed that Eaton’s laundry soap had some issues that caused the product to be reformulated, which caused about a one-year delay in the market.

LESSON 4: Don’t try to do technical steps on your own. Use vendor support.

Financing the Development Phase
Eaton’s path seemed fairly straightforward. But there was a catch: money. The ingredient suppliers and contract manufacturers felt his venture was a long shot. Even if he was successful, it might
take him two years or more to introduce his product. So suppliers weren’t willing to fund Eaton’s efforts, and he had to pay for everything. Sometimes he felt that the suppliers were trying to
make all their money off him in the development phase, so he had to invest to get through this development phase.

Inventors do have options with companies that Eaton didn’t pursue. They could offer royalties to the suppliers to cover expenses, or offer a share of the company to the suppliers in return for their financial support. These tactics work only if an inventor can make a strong case that his or her product could succeed. In Eaton’s case, he was pioneering a new product category—an inventor’s hardest sell. Vendors and possible investors tend to be conservative.

LESSON 5: Expect companies to charge you for their support.

The sale
Eaton is a marketing professional who had branded his product into the concept Hero Clean, Cleaning Products Made for Men. He knew that he did not want to just go in and talk to buyers. He had a concept for a market, and he wanted to go to an executive who was involved in merchandising cleaning products. In a retail organization, merchandising managers are responsible for the entire selection of products available, how those products are grouped together, how to differentiate to appeal to customers. This is a much different function than buyers who are selecting existing product lines and working with vendors on issues such as packaging, price and quality.

Eaton had done a lot of work with sponsorship of events before starting Hero Clean, and one of his contacts knew a sponsorship at Target. That Target contact gave him the name of the director of merchandising for cleaning products at Target. Eaton talked to him on the phone; the response was immediate and positive. Target studies had shown that there were a tremendous
number of men walking through their store alone, or with other men. The company wanted to entice these men to buy more products. Phase 1 of the sale was made.

LESSON 6: A big message is what gets in front of someone who can push your product through.

Sales Details Take Time and Effort
Like all big retailers, Target is conservative about which products it carries. It concerns itself with quality, the vendor’s ability to deliver and support returns, and how well the product is received.

The starting point is online sales. But to even do that, the starting point is the vendor site on Target.com. Vendors need to post a tremendous amount of information before getting started regarding specifications, packaging requirements and details on steps vendors need to take to receive approval for product
changes. This information is not shared with customers but is
required before you go online. The site also requires a vendor to
agree to Target policies, such as payment terms and returns. This
process took several months. Big retailers will return products to
you for the smallest deviation in a product or package from the
agreed-upon specifications.

LESSON 7: You need all of your details lined up with the retailer’s requirements before making your first sale.

Market Testing
The first test was Target.com, where the Hero Clean line did
well. But Target.com was also the testing ground for invoicing.
Target and most other retailers have requirements involving EDI
(electronic data interchange), in which retailers send orders to
vendors and receive invoices back. Retailers also use EDI for
other communications. EDI is tough for an inventor to do
on his or her own, but there are many EDI contract services
you can use. Selling on Target.com allows Target to run orders
through you, receive invoices and generally ensure that a company
is ready to sell to Target stores.

Putting Hero Clean on the endcaps of 16 Target stores in Southern California in August 2015 was Step 2 in market testing.

Expanding Sales to New Retailers
Eaton reports that other retailers are talking to him based on his success at Target. He hopes to launch sales at some of these stores by the end of this year.