Hip to the Hysteria 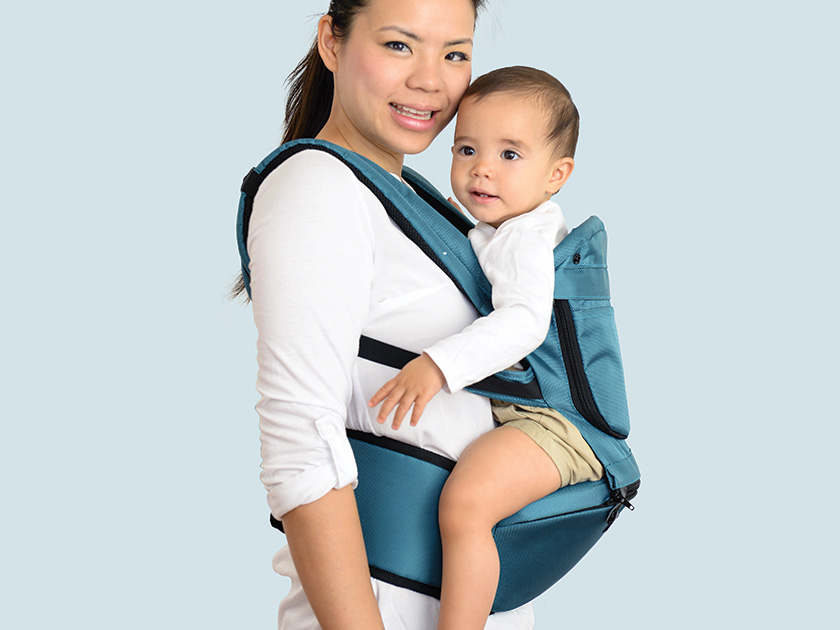 “By incorporating an actual baby seat into the HIPSTER carrier, we have indeed ensured that the baby’s thighs will be supported at hip level” and not dangling.

Cecilia Tsai and her husband, Alessandro Cereda, have an invention they say will quell the fears about hip dysplasia.

The Mayo Clinic says hip dysplasia usually happens at birth, a condition that occurs when a hip socket doesn’t fully cover the ball portion of the upper thighbone. This allows the hip joint to become partially or completely dislocated.

“For almost five years, we’ve been perfecting and selling carriers that are safe and comfortable for both the parents and babies alike,” says Tsai, who cofounded the company MiaMily with her husband. “While extensively researching, developing and field-testing the MiaMily HIPSTER Plus 3D carrier, we learned that there’s a surprising amount of fear-mongering clickbait about hip dysplasia and its alleged connection to wearing the wrong kind of baby carrier.

“In fact, according to the experts with whom we’ve consulted, hip dysplasia must already be a pre-existing condition for a baby carrier to worsen it. Although we were comforted by the notion that baby carriers such as ours cannot cause the condition, we wanted to focus on making sure our carrier could never exacerbate hip dysplasia in a baby who already has it.”

Tsai notes that in its earliest stages, hip dysplasia is a “silent” condition—“so that a parent might not know if his or her child is suffering through being held in a carrier that may be slowly worsening hip dysplasia. … So it was crucial to us that we made sure our product would provide proper thigh and hip support.

“By incorporating an actual baby seat into the HIPSTER carrier, we have indeed ensured that the baby’s thighs will be supported at hip level” and not dangling. Doctors say this is crucial for proper early hip development.”

The couple, who live in Switzerland, take pride that their invention came from a need they identified in their own experience. And the importance of safety and comfort wasn’t just for the baby.

“When I had my first baby, Mia—upon whom our company’s name is based—I couldn’t find a baby carrier that supported my back and hips properly,” Tsai says. “I was in so much pain all of the time. It was awful! Alessandro and I knew there had to be a better way, and we were tired of waiting for someone else to come up with a solution.

“My family is in manufacturing, so I was able to work with them in fabricating a prototype for a baby carrier that would actually feel good when I wore it and that would be just as comfortable and safe for Mia.”

Her husband says that when creating the HIPSTER, the four main priorities were safety, comfort, functionality and portability.

“Usually we tend to rest our baby on our hips, which causes arm and pack pain,” he says. “With HIPSTER, since the baby’s weight is on the seat and not on your arm, you can carry your baby basically standing straight up, with no weight on your arms.”

Ensuring safety was a given, considering that the product was made with the couple and their three young children in mind.

“It’s one thing to say we’ve done the research, we’ve done the field testing and we keep striving to make our products as safe and comfortable as possible,” Tsai says. “But the fact these are carriers we use every day with all three of our children is something we know our fans and customers can rely on when deciding it’s time for their own MiaMily carrier.

“Due to our diligence in ensuring said safety and comfort of our products, our MiaMily carriers have all been submitted and approved by global safety standards verified through SGS testing. Our carriers have passed the following safety standards: ASTM F2236 and CPSIA 2014, and the Consumer Product Safety Improvement Act of 2014, EN13209-2:2005 +AC 2016, GBT 35270, and EN 71-3.”

It took six months and four different variants for the couple to come up with a prototype they liked. “Then, something funny happened,” Tsai says.

“Other parents would see me wearing the carrier out in parks or while shopping downtown and ask what brand it was, where they could get one like it. Some even asked if they could take pictures of the carrier!

“That’s when we thought maybe we had something special on our hands, so we decided to make a video with our one prototype and go on Kickstarter to acquire the funding to produce and sell carriers to anyone who wanted one.”

After reaching their $25,000 goal in six days, MiaMily sold almost 700 carriers in 30 days in 33 countries. At that point, the couple—which had never intended to mass-produce and sell the carriers—had to reconsider.

“As any entrepreneur knows, often the best products are the ones you make for yourself to solve a problem you’re having,” she says. “Because hey, as it mostly turns out, other people might be having the same problem, and what works for you could very well work for them.”

When the couple launched their company in 2014, they were funding everything themselves. They had to prioritize their expenses.

“Back then, it was still incredibly time-consuming and cost-prohibitive for us to look into patents,” Tsai says. “Our primary concern in those earliest days was to develop and sell the best baby carriers we could come up with. The patents, for the time being, would just have to wait.

“Alessandro and I also knew that before going to all of the trouble and expenses of filing patents, we wanted to be 100 percent confident in our original model. If there turned out to be any components that needed further tweaking, we wanted to be certain all of that was handled before we entered into the patent process.”

They principally filed in 2017 and celebrated receiving their first official patent on May 28 this year. They are also completing the filing of other patents to come.

Timing proved to be their friend. By the third year HIPSTER was on the market, MiaMily was partnering with major U.S. retailers that included BuyBuyBaby and Babies R Us, with others interested.

“There was more brand exposure from these massive partners, and that was when we decided MiaMily was a success, that we had a product we could stand by—and it was time to get those patents,” Tsai says.

Unlike other inventors, Tsai and Cereda were never preoccupied with being knocked off.

“With or without our patents, we knew we’d soon be seeing ersatz copycats of our carrier out there,” Tsai says. “But Alessandro and I have decided not to worry about the competition, many of whom are already pretty late to the party.

“We want to keep focused on the one thing that got us here in the first place: Continuing to stay dedicated to researching, developing and selling the market’s most innovative baby carriers.”

One in every 4 babies in breech position develops symptoms of developmental dysplasia of the hip, per hxbenfit.com. About 1 of every 8 babies having a parent suffering from the disorder is affected by it. Girls are more likely to have this dysplasia as compared to boys.