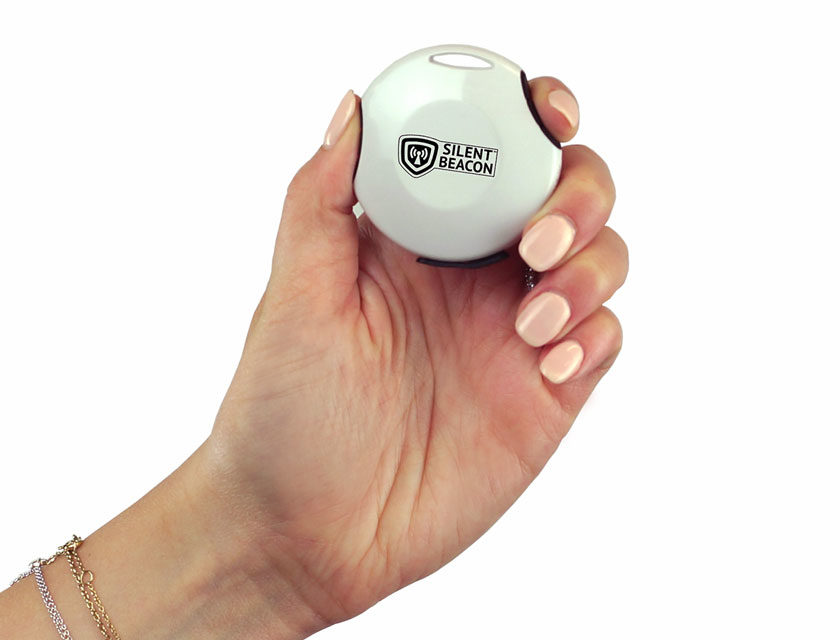 Device, paired with a smartphone, helps you send alerts in an emergency

Kenny Kelley’s motorcycle accident inspired him to come up with a device that doesn’t have a monthly fee.

Imagine falling off a motorcycle on a deserted road. You are not sure how badly you are hurt, and no one is around to help you. You panic until you realize you have your phone in your pocket and you can make a call for help.

But you reach into your pocket, and to your horror, your phone is not there. It fell out as your body skittered across the asphalt and dirt. It hurts too much to move and now you are stuck there, hopeful that someone will drive by and stop when he or she sees you.

This is exactly what happened to Kenny Kelley. He invented the Silent Beacon to allow people to call for help in any situation.

The Silent Beacon is a wearable panic button that allows you to easily call for help, no matter what kind of emergency.

When an alert is triggered, emergency services can be called and people in your defined notification network will be alerted. The device uses Bluetooth to communicate to your smartphone, so you must be within approximately 30 feet of the paired smartphone to send alerts.

It has dual buttons that must be pressed simultaneously to trigger an alert. This prevents false triggers. It also has a vibration function to give you haptic feedback as to the status of your alert call, and there is a microphone and speaker so you can communicate with emergency services.

The Silent Beacon can also be set up as a receiver so that you can subscribe to alert notifications from another user, which is particularly helpful for caregivers. The device requires no additional data plan, and the app is free to download and use.

Kelley’s feeling of helplessness immediately after the accident spurred his desire to develop a product around the idea. He had seen stories about missing people not being able to effectively call for help.

He had previous experience building software for game apps and felt that he could leverage that experience to build an alert device, but he did not want to create a device based on a subscription service that charged monthly fees.

“That is why nobody really has these safety devices on them,” Kelley said. “I wanted to develop something that would allow people to buy it once … and use the information you have on your phone so you never have to pay a monthly fee.”

Before developing anything, he did a deep dive on the existing market.

Kelley explored offerings from Chinese vendors but found that nothing was right to fit the need he had identified. There were Bluetooth beacons in the marketplace but nothing that had microphones or speakers to allow two-way communication.

With limited experience building hardware, he contacted developers on Upwork—a website to find freelancers—for help designing the first prototype. Unfortunately, the development was slower than he wanted.

On a whim, he reached out to the CEO of an electronic component supplier on LinkedIn. This led him to a product development firm in France, which he hired to help continue the development.

The pace of development accelerated, and the product was launched on Indiegogo in 2014. It was successfully funded with more than $76,000 pledged to the campaign.

However, pre-orders were not fulfilled for four years. The relationship with the French development team soured and caused major development delays.

“That was a bumpy road,” Kelley said. “Number one, you have a language barrier; number two, you have a time zone difference; number three, you just have a difference of opinion. It was a strenuous relationship.”

He was nearly ready to manufacture units before that relationship ended, and it cost him years of time to market. He lost the source files for the device and had to start over from scratch.

Fortunately, Kelley found a venture capital firm in Washington, D.C., to help inject capital and new life into the project. Despite criticism from Indiegogo backers for not fulfilling pre-orders on time, he continued development of the product. A new firmware team was brought on board, manufacturing resources were found, and the product breathed new life.

He filed a provisional patent application early in the development process. Bluetooth technology was a relatively saturated field in terms of patent filings, so Kelley worked diligently to carve out intellectual property that was both appropriate for the product and of high value.

After filing a provisional patent application, he was startled by threatening letters from lawyers representing other patented devices.  Undeterred, he continued with the process and once his utility patents were officially filed, the bullying letters ceased. The subsequent issued patents were a great help when courting VC firms to help with the company.

Two years after the split with the French development firm, the product was finally ready to ship. All of the original Indiegogo backers were delivered production units; the device was offered for sale via its website.

Based on customer feedback, a one-touch version of the device was developed for elderly and limited-mobility users to make it easier to trigger an alert. The Silent Beacon team is now expanding the device’s capability and working on cellular-enabled versions, as well as pet versions and corporate deployments for institutional use.