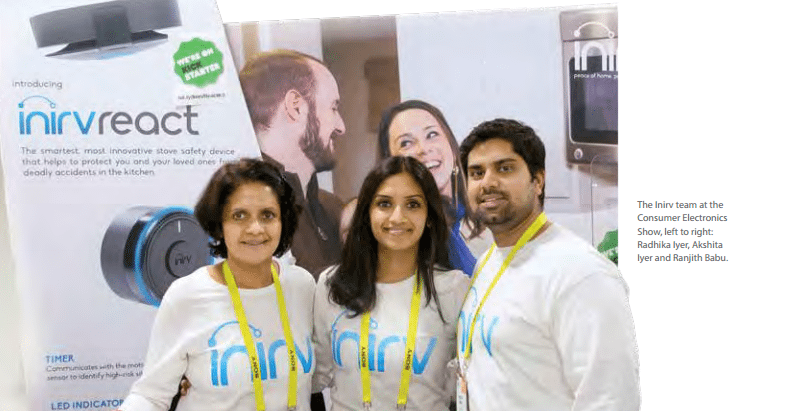 Akshita Iyer, Radhika Iyer and Ranjith Babu went to the movies, only to return home to a horror show. Their invention to address a home-safety issue is a story that highlights the growing importance of the Internet of Things, as well as the key roles of design engineering and marketing in bringing a product to market.

Radhika Iyer of Buffalo, New York, was visiting her daughter, Akshita, in Durham, North Carolina in 2015. The opening credits were rolling when Radhika—who had been cooking during the day— had an unsettling sense that she hadn’t turned off one of the stove’s burners. The three grudgingly returned home to make sure; when they arrived, the house was engulfed in smoke. Fortunately, no fire had broken out—but the scare provided the spark to create a device that could help protect others in the same situation.

The Inirv React smart stove device is the latest IoT creation to land on the Enventys Partners workbench in Charlotte. As consumers and companies show a growing interest in IoT devices, related products are popping up in categories that include home automation, automotive and recreation. These connected smart devices aren’t just about convenience. Some are designed for safety or even saving lives.

The Iniry React replaces existing stove knobs with motor-driven smart knobs that automatically turn off the stove if an unsafe condition is detected in the kitchen. The system features a ceiling-mounted sensor that detects motion, gas and smoke, and a knob unit to control the burners. It is compatible with most stoves that have mechanical knobs and features an app that can be used to control the position of the burners.

“After experiencing a stove fire, we needed to find a way to create a device that would prevent these disasters,” Akshita Iyer said. “With the experience and talent of the Enventys team, we’ve been able to build a unique and effective smart home safety device that is poised to save lives around the world.

Teams Go to Work
After their scare at home, Inirv cofounders and Duke graduates Ranjith Babu and Akshita Iyer conducted research that showed cooking equipment is the No. 1 source of house fires, costing Americans over $1 billion dollars in damage each year. With this added motivation, the couple came up with their idea for a connected smart device but needed help to bring it to life. So they reached out to a local design firm to help them make some prototypes.

The first models allowed them to vet the patentable technology behind the product and garner interest from investors. However, their prototypes were lacking in some areas. The knob unit was too big, heavy and expensive, and the aesthetics of the device were not refined enough to live in the home environment.

Last fall, the Inirv team found Enventys Partners, which offered the needed full-service design engineering and marketing services. In mid-October, the design team was challenged to give the React a whole new look in a smaller package so that the product could be launched on Kickstarter and at the Consumer Electronics Show in Las Vegas in early January.

With no time to waste, the design, engineering and electronics teams started work simultaneously. The The Inirv team at the Consumer Electronics Show, left to right: Radhika Iyer, Akshita Iyer and Ranjith Babu. design team studied the kitchen environment and trends in the IoT marketplace. The team drove the conceptual development of the project and gave the sensor and motor units their new iconic style.

The primary goal for the engineering team was to reduce the unit’s diameter and height. That team reviewed the existing CAD files and looked at solutions to shrink the drive train while delivering the torque required to turn the stove knobs. The electronics team immediately started breadboarding (prototyping) the circuit with Cypress Bluetooth Low Energy development modules and started working on the code to read the sensors, control the Bluetooth communication, and drive the motors and LEDs.

Deadlines Turn Up the Heat
The first major deadline was mid-December, for filming a Kickstarter crowdfunding video and shooting collateral images. The design and engineering team used SolidWorks CAD software to design the shells and drivetrain to house the internals while maintaining the new aesthetic. Just after Thanksgiving, the shop built and assembled 3D-printed parts. In the meantime, I designed and built circuits with Trinket microcontrollers to drive the units for filming. The prototypes, painted and given an A-level finish, were done just in time for our film shoot.

After filming, we had two weeks to get a functional prototype ready for the CES show. We made a number of tweaks to the mechanical design and got updated knob units 3D-printed. However, the biggest challenge was the circuit board. The knobs are small, so it was a puzzle to get the Bluetooth low energy and microprocessor module to fit inside the housing. Engineer Patrick Bailey worked hand-in-hand with electrical guru Larry Ober to end up with three boards for the device that fit perfectly inside the knob.

The boards arrived just a week before the show, so it was a sprint to get it ready. With so many small parts, it takes a full day to get the PCBs populated with all of the electrical components. Then there is the matter of troubleshooting the circuit. We had some issues with the LEDs that cost us some time, and the day before the show we found a short on the board and had to remove half of the components on the motor PCB to fix it.

At 5 a.m. of the day the prototypes had to leave, we did our final systems check and got everything boxed up. Following 28 hours with no sleep, I went home for 40 minutes to shower, grab my bags and say goodbye to my kids before heading to the airport for the CES show.

Savoring a Satisfying Journey
After arriving in Las Vegas, I jumped in a cab with “Fast Eddie,” a Bulgarian taxi driver with 35 years’ experience on the strip. He got me safely to the hotel, and I got all of the parts unpacked for one last test. Fortunately, all of the prototypes made it in one piece and worked flawlessly.

In the morning, I arrived at the show and got the demo set up. The Kickstarter campaign had launched the night before and was already at $20,000 after the first day. After many weeks of long hours, I finally got a chance to enjoy the journey and a job well done, especially a great sense of pride for the product and to be part of the Enventys Partners team that helped bring it to life.

Inirv React has had a great launch. The product was well received at CES by other industry professionals, and the team is in early-stage talks with larger manufacturers for potential licensing deals. The Kickstarter campaign continued to flourish; with 10 days left, the project with a $40,000 goal had surpassed $130,000.

However, the development work on the product is not over. We are working on final design files for the mechanical and electrical components and are pushing to start working with a manufacturer in the spring, and delivering the first production units to Kickstarter backers toward the end of 2017.