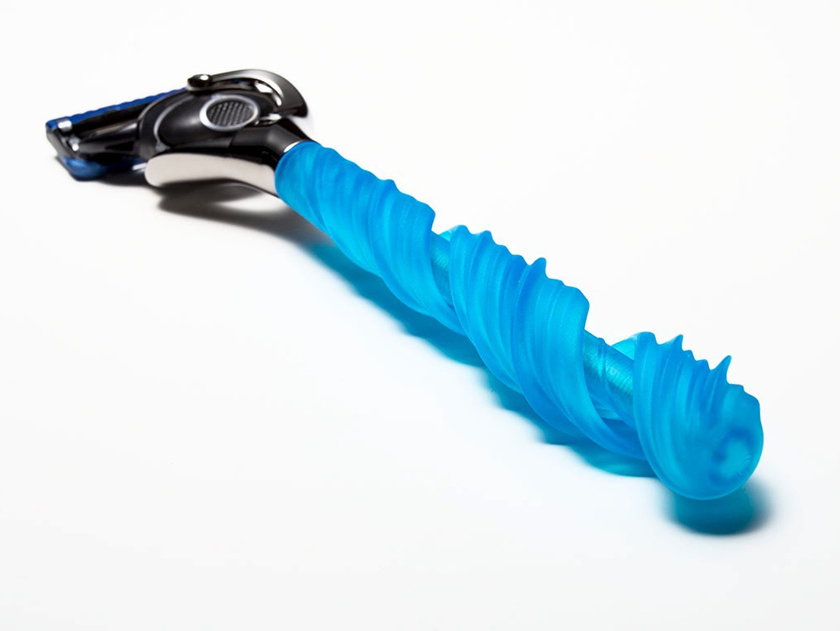 Multi-material printing allows engineers and designers to choose where in the print to add strength with the benefit of minimum added cost.

One of the most important tools for product development is the 3D printer. It helps prototypers build parts in a matter of hours, when machining or molding can take days or weeks.

3D printing (often called additive manufacturing) has been around for decades, but the machines, materials and techniques are constantly evolving. There have been some exciting improvements in the last couple of years. Here are some of my favorite trends from the 3D printing world.

Most people who own a 3D printer at home have what is called a fusion deposition modeling (FDM) style of printer, which draws each layer of the print with a string of plastic material.

The two most popular materials are ABS and PLA, which are easy to print but are middle of the road in terms of their material properties. Manufacturers realized this and have been creating filament spools of some high-performance materials to help 3D printers more closely match molded parts.

The biggest player in this space is DuPont, which has released its branded performance plastics Hytrel, Surlyn and Zytel in filament form. Hytrel is a tough yet flexible, Surlyn is tough and transparent, and Zytel is a high-performance nylon.

In a similar vein, Igus, the maker of flexible chain and motion systems for industrial machines, has released its Drylin material in filament form. Branded as iglide, this material is low friction and has superior abrasion resistance—perfect for printing bearings or other parts that require low friction.

Printing parts in a single material works for many parts, but there are some instances when a part needs added strength. However, printing an entire part with premium material can be expensive. Multi-material printing allows engineers and designers to choose where in the print to add strength with the benefit of minimum added cost.

A great example of high-performance, multi-material printing is the Markforged system. It uses a base material called Onyx that is thermoplastic mixed with carbon fiber, which is stronger than standard filaments by itself. It then has print heads that can lay down areas of engineered fiber such as Kevlar, fiberglass, and carbon fiber for added strength where needed. The result is light and strong parts that are relatively inexpensive.

Although 3D printing is considered a very fast technique for prototyping, it is very slow for production parts. For example, a part that is 1 inch long in every dimension may take 1-3 hours to print depending on the machine, whereas an injection-molded part of the same geometry takes just seconds.

However, new 3D printing technology is becoming available that is shrinking this gap.

Some of the biggest speed gains are happening with stereolithography forms of 3D printing where light is used to cure photosensitive resin. Traditional stereolithography uses a laser beam that traces each layer. While fast, it still has to trace every area of the build layer, and it takes a couple of hours to print a 1-inch-high part.

Nexa3D has developed a new light management technology that allows a full layer to be cured at once, which drastically speeds the printing. It boasts 1 cm-per-minute build height speed, which makes it fast enough to be viable for some mass manufacturing environments. Nexa3D also has a non-stick technology for the build plate, which makes it much faster to post process the printed parts.

Metal printing is amazing technology, but until recently it was very expensive and tricky to implement.

The most common type of metal printing technique is direct metal laser sintering (DMLS), which uses a higher power laser that sinters layers of fine metal powder to form parts. These machines cost half a million to a million dollars to get up and running, which is inaccessible to all but well-budgeted tech firms. However, new metal printing technologies are coming on board that are helping to bring down the cost.

One of the most intriguing metal printing technologies is bound metal deposition.

In this system, metal is embedded into a plastic substrate. Once the part is printed, it is placed in a furnace where the plastic is melted out of the part, leaving only the metal behind. Desktop Metal is the company leading the charge in this arena. Its entry-level system is about 20 percent of the cost of a DMLS setup.

Another interesting metal 3D print technology is the evolution of the hybrid 3D printer and CNC machine. DMG Mori’s LASERTEC 65 uses a laser deposition head to lay down layers of metal and then uses a CNC head to mill the part to a tight tolerance. This technique is squarely in the industrial sector but will continue to be an emerging trend as 3D printing moves toward manufacture-ready parts.

Since the beginning of 3D printing, customized mass-produced items have been one of the holy grails of the technique, and it is just starting to come to fruition.

Shoe insert maker Dr. Scholl’s is now offering custom insoles. Users can take pictures of their feet with their smartphone, and Dr. Scholl’s can then print perfect-fitting insoles.

Similarly, Gillette has teamed with Formlabs to create a service called Razor Maker. Users can design and customize their own razor handles, and Formlabs custom-prints each design. As print speeds and materials continue to improve, more manufacturers will be turning to 3D printing to create customized consumer products.