Icon for All Seasons 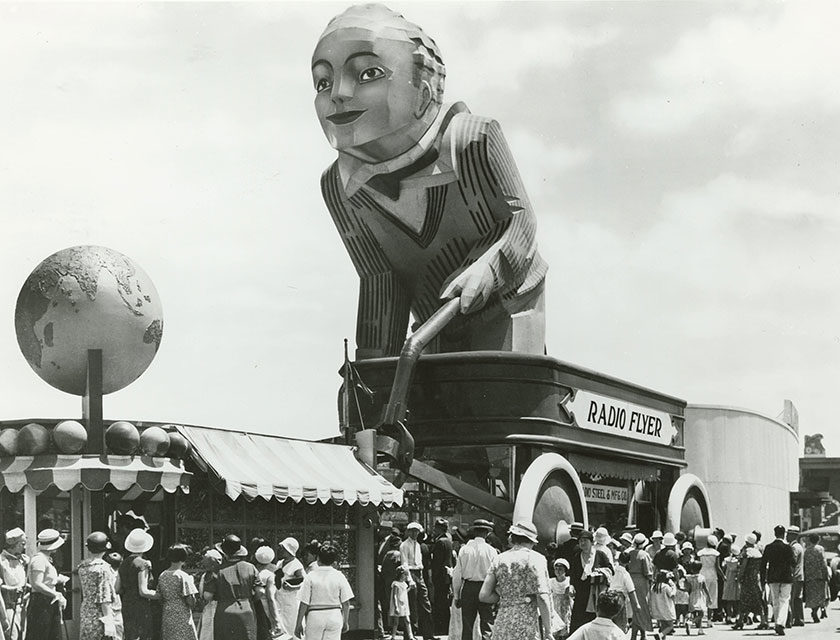 For as little as 25 bucks on eBay, you can pick up a miniature Radio Flyer toy wagon that was sold at the 1933 Chicago World’s Fair. What you will hold in your hand is an iconic symbol of Christmas—and the American Dream.

The December 2016 Inventors Digest featured one of the most memorable covers in its soon-to-be 35-year history: the leg lamp from the movie classic “A Christmas Story.” But the Radio Flyer red wagons in the window of Higbee’s department store at the beginning of the film represent something with more meaningful, real-life pull: a poignant reminder of a simpler and more innocent time.

Pop culture hasn’t forgotten. The Radio Flyer was the vehicle of choice for comic strip pals Calvin and Hobbes as they discussed philosophical matters large and small. The wagon was even the title of a dark 1992 movie in which a father recalled his forgettable childhood in the suburbs.

Radio Flyer Inc. rolls on today, two years after celebrating its 100th anniversary. In 1999, the wagon was inducted into the National Toy Hall of Fame; in 2015, Fortune magazine ranked the company No. 1 on its list of the 25 small businesses at which to work.

None of this would have come to be were it not for an Italian who moved to America as a 16-year-old to make a better life in 1913.

Risk of a lifetime

The ’33 World’s Fair was where Antonio Pasin’s gutsy gamble ensured his wheels would stay in motion.

He had come to America 19 years earlier, performing a series of day labor jobs in Chicago. “Antonio got off of that boat with no money, no friends, nobody,” his wife Anna said, per madeinchicagomuseum.com. “He came to this country and nobody would give him a job because he was too young. He couldn’t even make enough to eat. So he had to do a lot of odd jobs in order to get along.”

Eventually, he saved enough money to rent a one-room workshop for building wagons. His father’s and grandfather’s experience as cabinet makers had carried to another generation.

Pasin’s wooden Liberty Coaster wagon—named for the statue that welcomed him to America—was a resounding hit. He formed his company in 1917. By the late 1920s, in the style of the trend-setting automotive industry, his wagons evolved into a stamped-steel construction. He came up with the name Radio Flyer as a tribute to two of the world’s most influential inventions to date.

The company was reportedly cranking out 1,500 wagons per day, even during the Great Depression. But Pasin wanted to cement the viability of Radio Steel & MFG Co. on a larger scale, so he used the World’s Fair to unveil two displays of marketing genius.

The first was his decision to sell 4-inch scale models of the Red Flyer as souvenirs for 25 cents, an inexpensive trinket for young kids and a way for everyone to remember the toy for years afterward. The second was a novelty in the opposite extreme: a 45-foot-tall sculpture of a boy crouching in a Radio Flyer wagon, strategically positioned as part of a kids’ entertainment area at the fairgrounds, “Enchanted Island.”

“Coaster Boy” was part of a $30,000 investment by Pasin at the fair, one that could have threatened the company’s future if unsuccessful.

He had a family to support in America by then; his wife said it was the only time in her life she saw him nervous. But as he said, “I enter so many ventures in business with more nerve than capital.”

Pasin’s team reportedly sold more than 120,000 miniature coaster wagons at the Coaster Boy exhibit by the time the fair ended in 1934. The company remained a strong presence in America throughout the challenging times of World War II and beyond.

In a 1973 advertisement, the Radio Flyer says it is the “only wagon that outsells Ford station wagons.”

The company is still based in Chicago, with inevitable changes through the decades.

Pasin died in 1990 at 93. Robert Pasin, Antonio Pasin’s grandson, took over as CEO in 1997 when the company was not thriving due to competitors’ introduction of high-quality plastic wagons.

Radio Flyer eventually developed its own successful plastic version. The company also decided to focus solely on children’s projects—now including scooters, tricycles, ride-ons and horses—as part of its recovery.

But whatever happened to Coaster Boy?

His fate is not definitively clear. But Radio Flyer paid homage to him with a 40-foot, 15,000-pound sculpture called the “World’s Largest Wagon” in honor of the company’s 80th anniversary.

It’s still parked outside the company’s corporate offices—dramatic proof that its people are still thinking big, in the unflinching spirit of its founder.