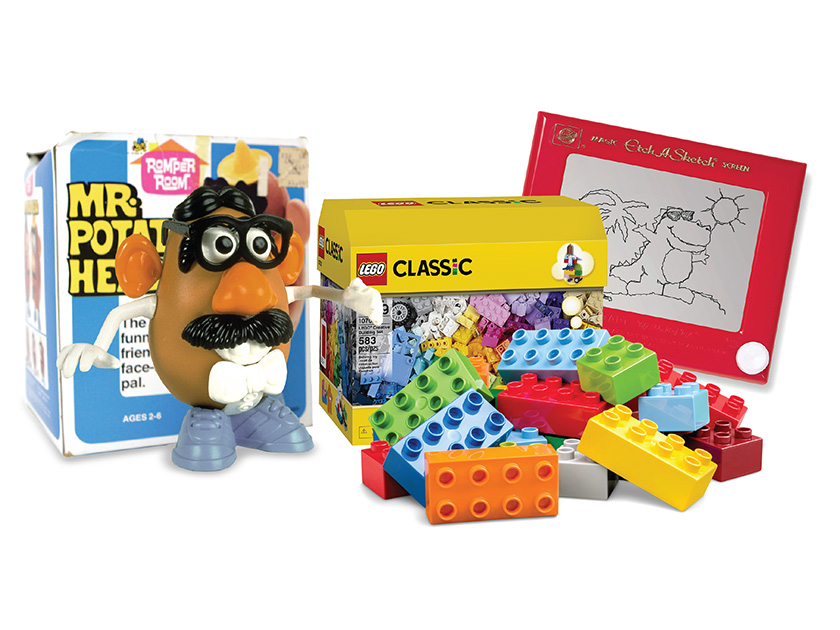 Some of America’s most fun inventions for kids

Since America’s earliest days, many creative and innovative toys and games for kids have come through the consumer marketplace—with some becoming so iconic they have become household names and synonymous with a moment in time for kids. Here are some of the best-known patented standards.

Editor’s note: In past issues of Inventors Digest we have covered classics that included Monopoly, Frisbee, the Hula Hoop and Bunch O Balloons—and there’s a story on the Slinky elsewhere in this issue.

In April 1973, the U.S. Patent and Trademark Office issued U.S. Patent No. 3728480, titled “Television Gaming and Training Apparatus.” Assigned to Sanders Associates, it lists Ralph Baer as the sole inventor.

The patent claims an apparatus, used in conjunction with a standard television receiver, that generates dots upon the receiver’s screen that can be manipulated by a user. The patent further claims the use of a joystick control to manipulate the dots on the screen. This created what has become a multi-billion in-home video game industry.

In 1971, Magnavox licensed the technology; in Summer 1972 it released its Magnavox Odyssey Home Video Game System. To switch between games, a user inserted a cartridge into a slot on a console, much like the popular Atari, Nintendo and Sega consoles that came years later. Unlike those cartridges, which contained internal circuitry required to play a game, these cartridges served as jumpers that completed the circuit connection required to select a specific game; all of the Odyssey’s games came preloaded on the console’s internal circuitry, which included 40 transistors and 40 diodes.

The Odyssey was a successful product, with 130,000 sold between the product’s September 1972 release and Christmas of that year. When the first model was discontinued in 1975, the Odyssey had sold a total of 330,000 consoles.

Mr. Potato Head was invented and developed by George Lerner in 1949, and first manufactured and distributed by Hasbro in 1952.

Although not relating to the original Mr. Potato Head, Lerner  received U.S. Patent No. 3,660,926 on May 9, 1972. The invention related to a toy capable of being easily assembled by a child. The components were provided in a metallic container or can, and the decorative elements were magnetic and attached to the can.

It doesn’t seem that this version caught on quite like the original, but with this clearly related patent to Lerner and true iconic status of Mr. Potato Head, an exception had to be made.

One of the most popular games of the 1980s was Rubik’s Cube, a puzzle game that proved enormously frustrating to many who attempted to unlock its solution.

Invented in 1974 by Hungarian inventor Erno Rubik, the device was patented in the United States with the issuance of U.S. Patent No. 4,378,116 on March 29, 1983, with the title Spatial logical toy.

On a classic Rubik’s Cube, each of the six faces is covered by nine stickers, each of one of six colors: white, red, blue, orange, green and yellow. The Rubik’s Cube craze captured worldwide attention in the 1980s, with tournaments and even the “Guinness Book of World Records” recognizing the fastest attempts to solve the puzzle.

Today, there are more than 40,000 YouTube pages dedicated to the puzzle game.

The patent explains that the invention relates to a perforated game board and pins insertable in the perforations.

The patent explains that play will go back and forth with each player calling out shots at the unseen target created by the other player. “Play continues thus and when one of the series of perforations within an enclosure has been filled with pins, that ‘ship’ is ‘sunk.’”

The Super Soaker is one of the most successful toys of all time, selling in excess of $1 billion worth of product.

Inventor Lonnie Johnson, a former United States Air Force engineer, was experimenting on a new type of refrigeration system when he conceived the method of using a pressurized water stream. He shortly thereafter conducted tests in his basement, built a prototype, and filed a patent application on his invention in October 1983.

Ultimately he was issued U.S. Patent No. 4,591,071 on May 27, 1986. The invention in that patent was a toy squirt gun that shoots a continuous high velocity stream of water. It was the first of many patents on what would commercially become known as the Super Soaker.

Success was not immediate, as is typically the case for independent inventors. Initially, the toy was called the Power Drencher when it went to market in 1990. After some tweaks and a name change, in 1991 $200 million worth of product flew off the shelves.

The Barbie Wikipedia page credits Mattel co-founder Ruth Handler, who on a trip to Europe came across a German toy doll called Bild Lilli. With the assistance of John Ryan, the page explains, Handler re-designed the doll and gave it a new name, Barbie.

Handler is not mentioned on the first Barbie patent, No. 3,009,284, which issued on Nov. 21, 1961. Therefore, we will say that the true inventor of Barbie was John Ryan, a designer who worked for Mattel.

The patent explains: “This invention provides a doll having a body and limbs in articulated relationship and means for supporting the doll in an upright or standing position for display or for storage.”

Since its founding in 1932, the Danish corporation The Lego Group has been primarily involved in the creation of toys and playthings. Despite some critical voices on the use of plastics instead of natural wood for children’s playthings, Lego began manufacturing plastic toys by the end of the 1940s. However, the interlocking plastic block the company released in 1958 and named the Lego exploded in popularity, eventually earning the honor of “Toy of the Century” by the British Toy Retailers Association as well as Fortune.

Lego received U.S. Patent No. 3,005,282 on July 28, 1958, protecting the design and manufacture of its toy building brick in October 1961. As the patent states, the blocks are designed to connect through projections extending away from the block that can engage with protrusions on adjacent blocks. This design, also known as a stud-and-tube coupling system, allows children to create thousands of unique works with even just a few blocks.

The yo-yo predates any single company, with evidence of similar toys going back as far as 500 B.C. The American craze for the spinning toy can be traced to the late 1920s, with the founding of the Yo-Yo Manufacturing Company by Pedro Flores, but the USPTO had been issuing patents to protect the manufacture and design of many yo-yos, whirligigs and “bandalores” for years.

The term bandalore is used to describe the toy protected by U.S. Patent No. 59,745, issued in November 1866 to James L. Haven and Charles Hettrick, both of Cincinnati. The invention is designed as two metal disks held together at the center by a clutch and rivet; the string is attached to holes found on either one or both of the metal disks. The patent discusses how this design enables the use of metal in the design, resulting in a higher degree of speed and momentum.

In 1946, American inventor Abe Bookman invented the design of this toy device. The design was conceived by Bookman’s brother-in-law, Albert Carter, who had the idea of creating and selling a fortune-telling craft product.

Interestingly, an 8-ball had been used to tell fortunes as a gag in the Three Stooges short film “You Nazty Spy,” which came out at least 5 years before Bookman and Carter developed their prototype.

U.S. Patent No. 3,119,621, issued to Bookman in January 1964, is among the first patents issued to protect the design and manufacture of the fortune-telling toy. This patent describes a toy containing liquid in which a buoyant indicator rises to a top window with a minimum of surface tension. This lower surface tension improves the visibility of the die and reduces its ability to stick against the internal walls of the 8-ball.

Bookman perfected the device in later years, as evidenced by further patents he received to protect the Magic 8 Ball innovations.

In 1959, a French mechanic named Arthur Granjean exhibited a new toy that he had developed at the International Toy Fair in the German city of Nuremberg. He called his invention the L’Ecran Magique, or “The Magic Screen.”

When no European investors lined up for his creation, he went to Americam, where he was able to interest the Ohio Art Company in his design. After adding a few knobs to Granjean’s design, Ohio Art released the Etch A Sketch to much fanfare in 1960.

The original USPTO patent for this device, U.S. Patent No. 3,055,113, issued to Granjean in September 1962, protects a device on which a user can trace any number of designs and then wipe them out immediately whenever he or she chooses. The toy consists of a fluid-tight case with a translucent screen situated on one side. An internal tracing stylus is controlled by a user through the knobs, scraping a metallic material away from the screen so as to create a traced image.