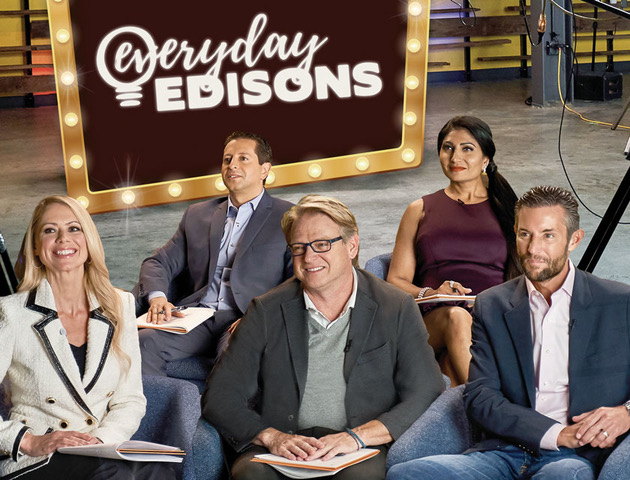 “Everyday Edisons,” an Edison Nation TV series that features real inventors and their ideas, will premiere exclusively on free streaming platform Crackle beginning in March. In eight new episodes, four judges will advise and encourage 24 new inventors seeking to change the world with their ideas.

The pioneer of all inventing reality shows with its original four-year run that began in 2006, the show changes its format in this incarnation.

Every episode features three inventors, each of whom has been coached by “Everyday Edisons” mentors (including 2019 Professional Bowlers Association Player of the Year Jason Belmonte) to refine their pitch before presenting their idea to a four-person panel of experts. Three experts comprise the panel every week—Ferguson, Foreman and Kelly Bagla, CEO of Go Legal Yourself. Guest judges include Lily Winnail, CEO and founder of Padalily; inventor and Inventor Coach Brian Fried; Tiffany Norwood, global speaker and inventor; Fred Cary, cofounder of IdeaPros; and Howie Busch, founder of DudeRobe.

One winner is announced at the end of each episode to become an Everyday Edison. He or she will win $5,000 and a chance to utilize the full resources of Edison Nation to bring his or her product to market—which has been Edison Nation’s mission for inventors since its founding in 2008.

Edison Nation has been opening a series of new product searches to make its services available to more innovators. By submitting ideas to those searches, innovators will be considered to compete on the next season of “Everyday Edisons.”

Although the show has a competitive aspect, it isn’t “Shark Tank.” In fact, the original version of “Everyday Edisons” preceded the ABC hit show by three years.

Ferguson, one of the show’s weekly judges, says, “Our series stands alone among inventor-centric programming because we’re not about being cutthroat. We’re about inspiring, educating, and helping inventors create the best possible product.

“’Everyday Edisons’ is more than an inventor competition; it’s a resource for the innovator community that provides invaluable insider knowledge to both its participants and its viewing audience.

“Edison Nation is gearing up several initiatives that provide greater mentorship and educational opportunities to our innovator community, and ‘Everyday Edisons’ is a big part of that. Nobody has been more committed to supporting the inventor community in a fair and meaningful way than Edison Nation.”

When co-creating the original show, Foreman said the mission “was not to humiliate people or throw anyone off an island.

“We wanted to inspire inventors to follow through with their great ideas. But most important, we wanted to educate them on the process, to prevent people from becoming victims. That is still the mission today.”

Origins of a return

Cable, the producer who also was in charge of finding distribution for the new show, says Ferguson was the driving force behind the show’s return.

“It began last year. He, myself and Louis Foreman got together and Chris wanted to bring it back. The show has such a halo effect around it, even after all these years.

“He thought it could be a real boon for the Edison Nation community and all the things that Chris and his group were excited about—bringing a great service to the community and bringing new eyeballs.”

Another factor was the excitement of bringing back the show “in a time when the media landscape has totally changed. This was really exciting.

“When we did the show starting in 2006, Facebook was just a place to see what your high school girlfriend looked like. Twitter was Ashton Kutcher and a couple other people. Amazon was still selling books and toasters. Netflix was still delivering DVDs to your mailbox.

“It was just a different time.”

The new show—technically, Season 5—is set up and executed differently. The first time around, Cable says, “We did these massive casting calls where we had thousands of people lining up at convention centers. Plus, we wanted to show the whole product development process, from a figurative sketch on a napkin to being a product on a store shelf.

“This go-around, we have a group of inventors who are hand-selected through Edison Nation. This time we wanted products that were further along but not finished, to educate them and encourage inventors with the possibility of Edison Nation’s help to be a launch pad for the product.”

The first incarnation of the show had 13 episodes per season. “To see the happy ending, you had to watch 13 episodes,” Cable says. “But the attention span of the viewer is very short. Now, each episode is self-contained.”

“People are not as interested in a 13-week appointment. They want quicker, smaller, bite-size pieces and they may want it in a different format. Instead of sitting on a couch and watching it, they might want to watch it on their tablet or mobile device.”

A dream panel of experts

Cable is “over the moon” about the expertise level of the panel members and how well they interact, which will be obvious to viewers. One of the weekly panelists, San Diego-based attorney and inventor Kelly Bagla, shares that enthusiasm.

“As a practicing attorney, I am frequently introduced to new inventions from hopeful inventors seeking ways to get their products on the market,” she says. “I, too, am one of those inventors—who invented a line of plush animal toys called ‘Eardorables’®.

“I have been down that road that many inventors experience, and it’s hard. To be able to help such fellow inventors with their inventions from the creation process to the legal protection process to the market process has become my passion, and keeping within the same spirt, I am honored to be a part of ‘Everyday Edisons.’”

Howie Busch, a well-known mentor for “Shark Tank” alumni, said of his guest judging experience: “Being a judge on ‘Everyday Edisons’ as an inventor, product developer and entrepreneur was, for me, a lot like being a kid in the candy store. I loved every minute of it.”

“I was so impressed with the ideas, and I truly felt each one was already a winner for the simple fact that they pursued their idea beyond just a thought. They put their thought into action. I wish I could have chosen all three!

“America is alive and well, and what we built our country on is at the heart of this show.”

‘You root for them’

Cable says that encouragement is what “Everyday Edisons” is all about.

The TV news veteran’s 23 Emmys come in categories including writing, editing, photography, documentaries, breaking news, feature news, live reporting and investigative reporting. Cable has been nominated for five more Emmys this year; during his interview for this story, he was on his way to getting fitted for a tuxedo for the Midsouth Regional Emmy Awards in Nashville.

His work emphasis has always been on evocative storytelling that reaches people on a human level. Being executive producer for “Everyday Edisons” poses a different challenge for him because “there is very little writing. You’re capturing the action.”

But it’s still about people and their stories.

“It’s always been my thing to tell the backstories and humanize the main subject—in this case, the inventor. You really get to know these people in their struggles. You feel for them. You root for them.”

Guest panelist Tiffany Norwood—who raised $670 million to fund WorldSpace, the first global digital satellite radio start-up—said the show gives the world a peek into “the future of delight and awe.

“As Thomas Edison once said: ‘If we did all the things we are capable of, we would literally astound ourselves.’ That pretty much sums up ‘Everyday Edisons.’ It gives people the opportunity to astonish themselves.”

For an update on the show’s official release date, connect to @WatchEverydayEdisons socials. The show’s website is everydayedisons.com.

Crackle is a streaming service that provides a free alternative for binge-watchers who love to catch up on TV shows and movies. No membership is required. Crackle is a Chicken Soup for the Soul Entertainment company.

Viewers can see Season 4 of the “Everyday Edisons,” which then appeared on PBS, on Crackle.

Go to edisonnation.com, where Edison Nation has opened innovation searches specifically for “Everyday Edisons” consideration. You can sign up there.

Join Edison Nation’s email list and connect to its social network to stay current on the latest developments.

Edison Nation is launching a “Made by Everyday Edisons” product line comprised of original concepts inspired by the Emmy award-winning show.

The inaugural line includes a variety of products, ranging from kitchen gadgets to pet supplies, that offer everyday solutions in major product markets. Each item will be co-branded with its own unique logo memorializing the inventor.

The “Made by Everyday Edisons” line will be distributed through the Edison Nation omnichannel sales network, including Amazon.

Nice article Reid! Everyday Edisons is a great way for Inventors to answer many of their inventing questions; getting a peek of the processes of taking a product from conception to store shelves!

Thanks, Elizabeth! Keep reading — and if you know of anyone who wants to advertise with us or cosponsor us, let me know. Our rates are extremely attractive, and as you know the site/magazine is very professional and popular. — Reid