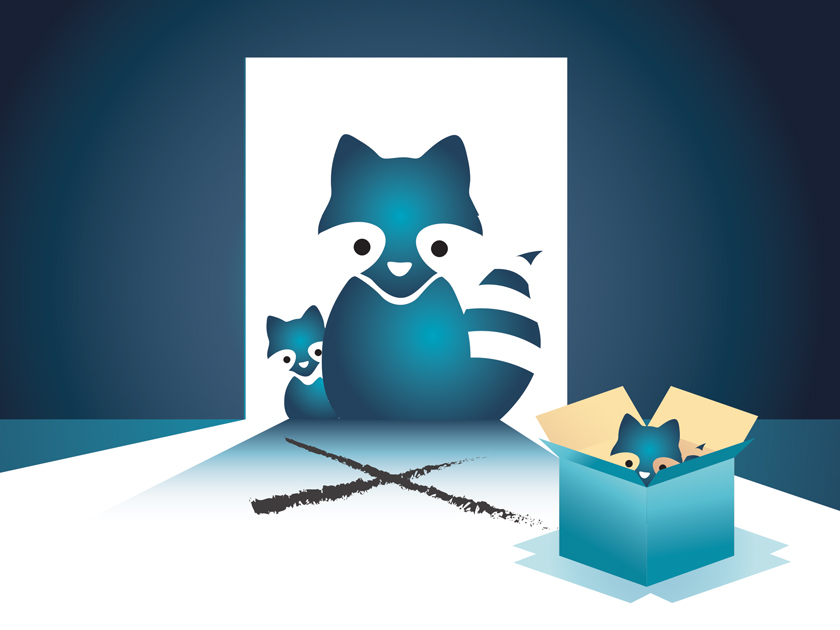 Here’s a potential opportunity, but know the challenges of being first to market

Rushing to a patent attorney without detailed features is a mistake that many inventors make.

My wife and I were recently awakened by a loud noise coming from the ceiling above our bed. It must be something huge and fierce, I thought.

Mary grabbed a flashlight, pulled down the attic stairs, and cautiously ascended. (Her side of the bed is closest to the stairs.) A few seconds passed and I heard a drawn-out, sentimental “awe.” I knew that at least the monster was not fierce.

Mary came down smiling. “It’s a mother raccoon and her babies,” she said. Well, I have nothing against raccoons, but I prefer they don’t use my attic as their maternity ward. What now?

Our condo association takes care of such things. It dispatched two fellows in hazmat suits and leather gloves extending to their elbows.

“Where’s the Havahart® trap?” I asked. The answer was that the association didn’t use these humane contraptions. The workers removed the babies in a bucket and said that the desperate mother would eventually leave the attic and look for them.

They placed the bucket on the ground next to the point where she had started her climb to the roof. She would hear them crying when she came down and transfer them to another safe location, they told us.

This seemed a risky process for reuniting the mother and her brood, but they assured me that it was effective 95 percent of the time. It was that 5 percent that concerned us. I wished we had not informed the condo association but had trapped the mother, alive and uninjured, and moved her and her babies to the nearby woods ourselves.

And if the unwelcome guest were a mouse and her babies, it’s almost certain that we would not have heard her. We would want to move the mouse mother and her babies as soon as possible after trapping, and it made no sense to torture her or her babies by separating them any longer than a few minutes.

Surely the people who are concerned about needlessly killing animals, even so-called vermin, and who use Havahart traps, will also be concerned about avoiding psychological torture to a trapped animal—especially a new mother that has offspring to nurse.

Years ago, I trapped a large rat in my garage using a Havahart trap. My guess is that he had been in the trap for at least three hours before I discovered his plight. Call me anthropocentric if you wish, but that rat’s glaring eyes told me he bitterly hated me. I couldn’t blame him (or her).

Aha! The eureka moment! What is needed is a trap alarm—a loud, high-pitched signal that beeps every 10 seconds or so.

Is such an alarm patentable? Almost certainly, it is not.

Jump in if you love animals as Mary and I do. I’m too busy to take advantage of this potential invention. Until you flesh it out with details that may be novel, it is simply an idea for an invention. Rushing to a patent attorney without detailed features is a mistake that many inventors make.

The main point is that even though products such as the Havahart trap have been around for many years, there may be opportunities to invent accessories that enhance their use. And I speak to the entrepreneurs as well.

Not all inventions need a patent or can qualify for one. Sometimes it is best to produce and market.

Another caution: Being first in the market is risky, as I pointed out in the April issue of Inventors Digest. The middle of the Goldilocks Zone is the safest, because it assures that the market is established. If your invention’s benefits are attractive, and its price is competitive, you should get a share of that market.

However, being the first to market often means that you may have to advertise to make the market aware of your product—and advertising is generally much too expensive unless you are launching a high-priced product, typically above a hundred dollars.

The exception is that novel products are often introduced to the market through catalogs. That’s the catalog’s niche in the overall marketplace. But in the case of a novel Havahart trap alarm, it is unlikely that catalogs would take on the product unless they also sold the traps. Fortunately, there are a few catalogs listed under “catalogs on pest elimination,” such as pestcontrolsupplies.com.

It is best to get your product into the catalogs before approaching Amazon, however. Many catalogs won’t take on your product if it is already sold by brick-and-mortar retailers or Amazon.com.

The moral of the story is that an invention should be considered as an accessory until we conclude that it isn’t. And accessories can ride to market on the coattails of the product they complement.

Finally, if you hear a loud noise in your attic, be very careful. It may not be a mother raccoon and her five adorable babies.