Inventions That Never Caught On 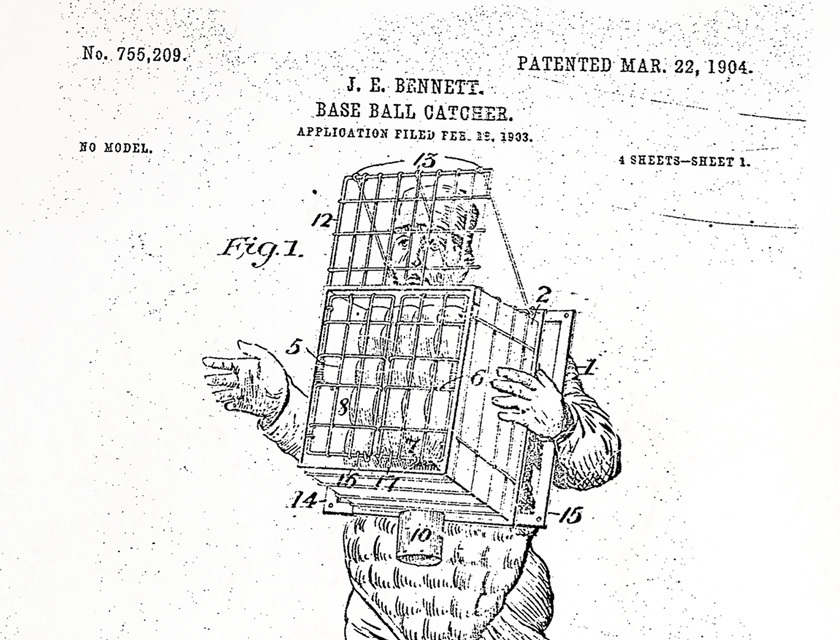 Don’t think for a minute that extreme inventions are limited to the present. Humphreys’s dizzyingly complex engineering feat was designed to eliminate umpires altogether.

A Canadian, Humphreys bemoaned the notion of “undecided events and close decisions by the umpire as to base-hits, runs and putouts, so that by mere partiality the umpire is often enabled to practically decide the game.” So he built an entire electric signal system for use on the field, involving a series of circuits set up across the infield to send electric currents whenever a fielder had caught a ball or retired a baserunner. Fielders would have to stand on a pair of metal plates near each base.

Yes—U.S. Patent No. 727,633 was just a little too complicated for widespread acceptance.

There was nothing rough about being a catcher in baseball’s earliest years. Pitchers threw underhanded. A catcher didn’t even have to catch a third strike on the fly. His main job was preventing the ball from rolling too far away.

But as the game sped up and the catcher was required to move closer to home plate, his job became the most dangerous on the field.

So, in U.S. Patent No. 755,209, Bennett detailed a wire cage that was worn on the chest, which would catch each pitch and protect the catcher’s hands until he threw the ball back to the pitcher.

The cage was reinforced on all sides with wood; springs at the back protected the catcher’s chest from the force of each pitch. Ideally, once the ball passed through the open front end, it closed automatically and an opening at the bottom of the cage dropped the ball into the catcher’s hands.

Maybe Jim Joyce could have benefited from this contraption when his missed call at first base with two out in the ninth inning cost Detroit Tigers pitcher Armando Galarraga a perfect game in 2010. Or when Don Denkinger botched a call at first base that helped change the course of the 1985 World Series.

On close calls at first base, umpires are taught to listen to determine whether the sound of a baserunner’s foot hitting the bag beats the sound of the ball hitting the first baseman’s glove. So, O’Neill thought to put a bell inside the base.

O’Neill explained in U.S. Patent No. 171,038: “In place of the bell mechanism, a sounding whistle, electrical connection, or any other suitable enunciating device may be employed, which indicates clearly and positively, without chance of error, the exact moment when the base is touched by the runner, so as to form a very useful and reliable device for base-ball players.”

O’Neill obviously loved bells and commas, but marketing clearly was not his forte. Why didn’t he call his invention the Base-bell base?