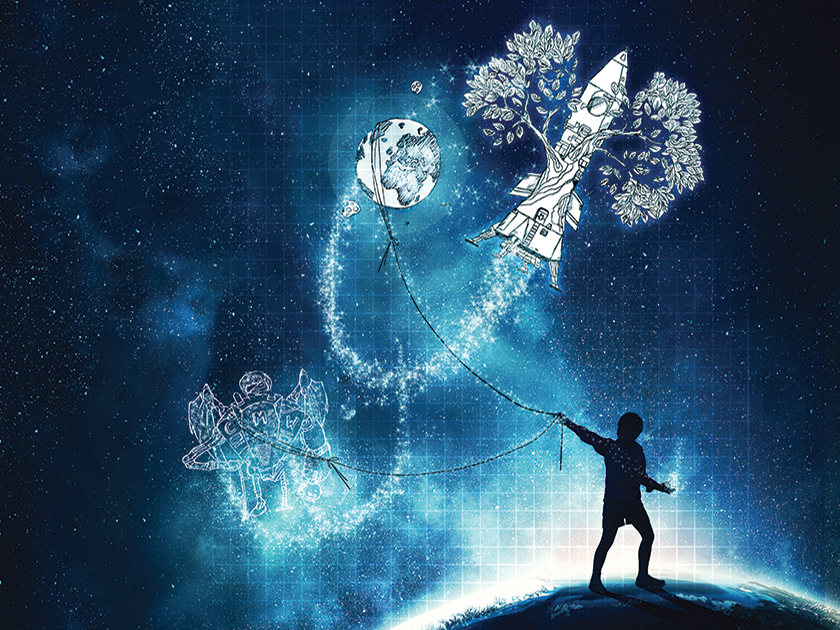 Children’s innovative creations would ideally solve a galaxy of problems

“We wanted to give the founders of tomorrow a platform to show us what they think of the world today.”
—Helen Tomes, author at The UK Domain

What are the chances that the 11 millionth U.S. patent will be issued to a child?

A 9-year-old girl from the United Kingdom is creating with senior citizens in mind. Laura (last name withheld for privacy reasons) conceived a benevolent robot that cares for elderly people and caters to their every need. Cody the Carer has “eyes that tell us if the person is getting ill, hands that are waterproof and can do dishes, and a mouth that talks to the old person and stops them from being lonely.”

The UK Domain, which helps businesses and individuals achieve more online, asked a group of children between ages 6 and 11 what they would invent to make the world a better place. An illustrator then interpreted the children&#39;s drawings to help bring them to life.

“It’s fascinating to see the creative and often thoughtful way that children see the world,” says Helen Tomes, author at The UK Domain. “We wanted to give the founders of tomorrow a platform to show us what they think of the world today.”

Some of the children’s creations would seemingly be an impossibility in real life. But remember how we rolled our eyes at some of the outlandish contraptions presented in the 1985 blockbuster movie “Back to the Future”? Among those that are now available for purchase: video phones; biometric devices; hands-free gaming consoles; smart clothing and wearable tech; personal drones.

You go, kids. Here are other possible planet-changing innovations, from a top 10 list available for view at theukdomain.uk/future-
founders/.

How could a 6-year-old from the UK imagine that his idea would become the impetus for this month’s Inventors Digest cover art?

Tyler says The Tree Rocket is capable of transporting its passengers from England to Australia in 1 second. Windows in the top of the tree allow for cool views during travel, and the door in the trunk provides easy access for travelers.

Olly is a machine that scours the ocean for rubbish and captures it in a giant net. Daisy, a 9-year-old from the UK, writes that the machine would have solar-powered propellers and “eyes to see if there is any fish not to hurt them.”

Six-year-old Luke from the UK devised a machine that mixes hearts and very hot water to create love, a special steam released into the air. Because love is not to be wasted, hearts not turned into steam are boxed up, moved along the conveyor belt and shipped out all around the world for people to enjoy.

We had to ask Luke how he came up with this. He said he was inspired by the 2005 musical fantasy comedy film “Charlie and the Chocolate Factory”—but that his machine would make love instead of chocolate. Luke likes building things with LEGO, which helps his idea building.

Another 6-year-old, Harry from Australia, imagines a vacuum-like device that sucks up all the guns in the world and destroys them in its dynamic body. The wheels at the bottom facilitate speedy transportation for where this powerful Sucker is most needed.

A magic, microwave-like machine, the Spawner conjures up any food you want. Ten-year-old Mia from Australia says you just type in the name of the food you want, and the Spawner uses its antenna on top to search for recipes and generate your dream snack.

Nine-year-old Lily from the UK imagines a world where no repair tools are necessary. The Tizzer can fix anything in a minute. Just point it at the thing you want to fix, turn the white button, and wait 10 seconds for the high-tech laser to start up and begin using its special fixing rays.

“I wanted to invent something to help the environment,” Lily told us. “Inventing is fun and I enjoy it, and we always have to try new things for the future.”

Apparently Bob is a war veteran of the noblest kind. Eight-year-old Lexie from the UK says that although he’s been in the wars himself, Bob is “perfect at helping other people.”

Equipped with wings and the kindest brain in the world, Bob can cure cancer, medial issues and encourage world peace. Bob reminds everyone that not all disabilities are visible.

The machine helps its operator get ready in the morning. Six-year-old Sam from Australia imagines that once your dream outfit is put together with the handy selector screen, the giant mechanical dressing arm pops your clothes on as you glide comfortably along the conveyor belt.

The Challenge to Grow

It’s exciting to see the minds of possible future inventors at work. The challenge is to keep that momentum building throughout childhood and into young adulthood—and statistical indicators are that this challenge is massive.

Recent research from the Equality of Opportunity Project examined patents, tax records and test scores to determine which U.S. kids do and don’t grow up to become inventors. They found that socioeconomic and racial factors are a reliable predictor of a child’s inventing future.

Strong science and math test scores by children would seemingly portend a future in inventing, right? But usually not. According to the study, even top-scoring students are not much more likely to become inventors unless they are boys from white, upper-class backgrounds.

Children from the top 1 percent of household incomes are 10 times as likely to become inventors as their middle- and low-income peers.

Such an economic, gender and cultural disparity underscores the importance of STEM programs in schools and the role-model impact of hands-on instructors. The study also discusses the importance of an environment that is conducive to invention, including exposure to inventors and patent holders.

I think the drive to inventive is a love born into us at a young age.To visualize a solution to a problem is a gift. Yes, many children have that drive. To identify and nurture them is key.

It’s my understanding the best feeling in the world an inventor can experience is seeing the public using the invention.