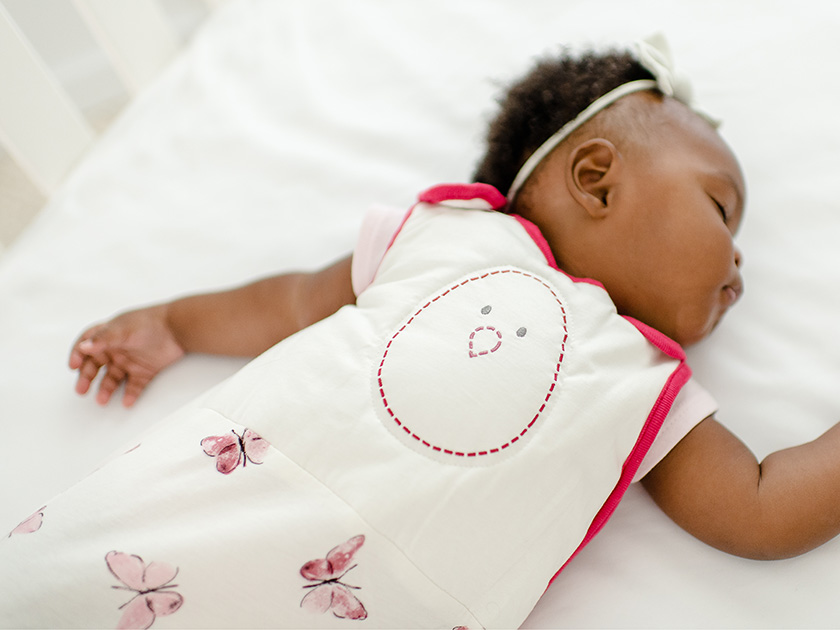 “There was nothing typical about our newborn’s sleep patterns. He only slept in my arms and would wake up as soon as he was put down.”

I love learning about new baby products. New moms or dads, often sleepless during those early months, take their last bit of energy to research solutions that help their baby—and them—to sleep like, well, a baby.

A mom, Manasi Gangan, has had much success with her line of Zen Sleepwear for babies.

Edith G. Tolchin (EGT): What is Nested Bean’s Zen Sleepwear, and how does it work?

Manasi Gangan (MG): Nested Bean’s Zen Sleepwear is designed to help babies sleep easier and longer by providing continuous comfort between your cuddles. It is the only infant sleepwear with lightly weighted “cuddle pads” on the center and sides of the baby’s body to mimic the sensation of being held in a caregiver’s arms, because that is where we typically rest our arms when holding a baby.

According to researchers Dr. Tiffany Field and Dr. Saul Schanberg, the simulation of touch elicits a neurological response similar to touch itself. The “cuddle pads” are calibrated, according to physiotherapy standards, to impart just the right amount of therapeutic pressure on a baby’s body to make them feel the security of our embrace and help them go from one sleep cycle to the next, thus lengthening the duration of sleep.

EGT: What led to this invention?

MG: We had just welcomed our second son, and like any typical new mother I was prepared for the frequent nighttime feeds and the sleep deprivation that came with the territory. However, there was nothing typical about our newborn’s sleep patterns. He only slept in my arms and would wake up as soon as he was put down.

If necessity is the mother of invention, then curiosity ought to be the father. The idea for Nested Bean’s flagship product, the Zen Swaddle®, was born out of my desperate need to find rest, and my curiosity about whether the soothing comfort that he felt in my arms could be mimicked.

As I looked for answers, I came across the work of Dr. Schanberg, a prominent touch researcher. His findings suggest that the calming and nurturing benefits of touch can be simulated to trigger the same soothing response as touch itself.

Think how much you love relaxing under the weight of your favorite comforter at the end of a stressful day. That is because our skin receptors cannot tell the difference between a person hugging, or an object imparting a similar pressure. The receptors trigger the same neurological response to soothe and reduce our stress levels (as long as the pressure to body weight ratio is maintained at, or under 10 percent).

Many new parents have felt the lure of products that promise better sleep. New mothers who experience prolonged sleep deprivation are likely to experience isolation and even post-partum depression. However, despite all the products in the market, babies sleep best in our arms. Developing a product that extends the calming benefits of touch seemed the perfect bridge to soothing a baby, while promising some rest to parents coping with the demands of early parenthood.

Following physiotherapy guidelines, our product development team designed a beautiful and functional product with the safety of the baby as the foremost priority. We worked with Consumer Product Safety Commission-certified labs to test the construction and design to ensure that there was no risk to the baby. Test results were verified by pediatric pulmonologists and approved as eight times safer than their best benchmark. That is when I knew we had a product that could be taken to market.

Finding a quality and safety-conscious manufacturing partner during the early phases wasn’t easy. I had heard horror stories of manufacturing companies from the Far East who did not show consistency in quality or pricing when working with early-stage companies. Developing in the USA was proving to be cost prohibitive. South America was a good first option while we developed scale enough to work with a larger factory in Asia.

After spending almost a year in research, design, safety testing, consumer testing and perfecting the manufacturing details, the Zen Swaddle was launched in a test market in late 2012. That year, we even won the Juvenile Product Manufacturers Association Award for Innovation.

EGT: How many tries did it take before you perfected your first prototypes?

MG: If I had to guess, I would say somewhere between 40 to 50 individual tries and 10 or so actual samples were tried with testing groups before we developed the first marketable product.

EGT: Did you have any difficulties with patenting the product?

MG: There were no major issues patenting the product. We have since built on the first patent with a broader patent. The key is doing sufficient research on comparable patents before documenting the uniqueness of your own.

EGT: How many styles, fabrics, sizes and colors have you created? Retail pricing?

MG: Since launching our flagship product, the Zen Swaddle, we have developed a line of lightly weighted sleepwear which includes sleeping bags, footies and body suits. There are collectively around 55 SKUs, and the retail price ranges from $29.99 to $49.99. This excludes bundles and multi-packs.

EGT: How does the sleepwear comply with the Consumer Product Safety Improvement Act’s government regulations regarding production testing, labeling and so on? What about the beads coming loose?

MG: Nested Bean takes safety extremely seriously. Before launching the company, we consulted with safety firms to make sure that the Zen Sleepwear complied with all the CPSIA safety requirements, both mandatory and voluntary.

The construction of the Zen Sleepwear demands the highest form of safety when enclosing beads in its weighted “cuddle pads.” The beads are first sewn into a fabric pouch completely. The pouch is then sewn into the garment, creating a double redundancy. The beads are also calibrated such that there is enough air flow allowed through the cuddle pads.

EGT: Are you manufacturing in the United States, or overseas?

MG: We manufacture in China and Vietnam and work with branches of top American safety firms to conduct safety testing.

EGT: Can you share any problems you’ve encountered during product development?

MG: My deep background in IT product development guides me in this process. If you pay attention to the details and have a great product development team, you can avoid many of the common hurdles. Building the right qualified team and iterating through testing with focus groups is necessary.

Finding the manufacturer is the largest hurdle. I got lucky and found a manufacturer who was able to give us a shot because they believed in the efficacy of the product.

EGT: Are you selling online or with Amazon, or other retail? How has social media advertising worked out for you?

MG: Nested Bean products are sold through our own website as well as Amazon, and retailer websites such as Buy Buy Baby and Target. Social media has been a great tool to educate, spread brand and product awareness, as well as receive social proof. Digital content marketing is, as a whole, integral to our success.

EGT: Any new products on the horizon?

MG: Yes, we will be extending the Zen Sleepwear line in 2019 and 2020 to capture a larger market size. We are also developing a road map for products beyond the sleepwear. This is a nod to our commitment to our brand mission of sleep wellness.

EGT: Any words of wisdom for inventors?

MG: For inventors, developing patents is not as hard as you think. If there is a problem that you have a solution to, search for similar solutions using Google Patent Search. Any local IP attorney may be able to help you out to determine if you have a patentable idea at no charge. After that, it’s with just a little perseverance that you may be the owner of the next million-dollar—or, better still—a billion-dollar idea.

For entrepreneurs, the difference between an idea and a successful venture is action. Plan your steps carefully towards materializing your big idea. Use your creativity to make your seed funding last as long as you can. Your energy will attract people who believe in you. There will be obstacles, but stick to your gut and focus. Show grit and wear failure down.

The Power of Touch

A 1988 study conducted by Dr. Tiffany Field showed that premature infants who were massaged for 15 minutes three times a day gained weight 47 percent faster than others who were left alone in their incubators.

Dr. Field said the massaged infants did not eat more than the others.