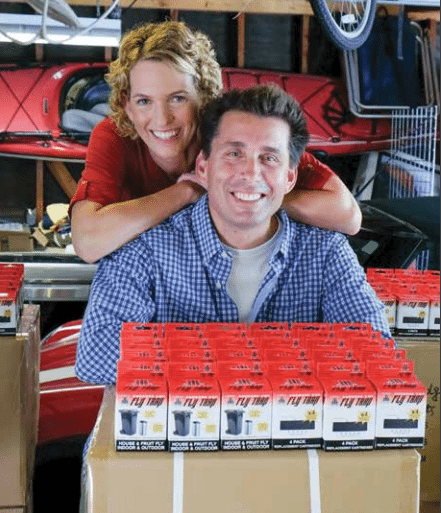 Couple’s device for garbage can catches pests for easy disposal.

Have you ever wished for a solution to house and fruit flies that did not involve toxic chemicals, electronic zappers or fly swatters? Tired of placing a defogger inside your house and hightailing yourself and your pets to safety while you hope those bugs are properly exterminated?

Joylyn and Dennis Darnell, a couple from Pacific Beach, California, have long contemplated a better solution. The Garbage Can Fly Trap is a simple and natural alternative to other methods that often do not solve this common bug problem. Their invention can attach to your outside trash can, which helps keep flies from getting inside your house.

Edith G. Tolchin: Please tell us about your family and background.

Joylyn Darnell: If you want to see how strong your marriage is, try launching a Kickstarter while raising a 2-year old, and working full-time professional jobs! Dennis and I did, and I can say we’re stronger for it. We also appreciate more deeply our unique contributions and how critical it is to have different skill sets when bringing a new product to market. I have the business, finance and marketing background (I have an MBA from San Diego State University) and Dennis is the inventor, tinkerer, engineer (Dennis has his BS in Electrical Engineering from the University of California San Diego (UCSD). I am risk averse, and he jumps all in headfirst. It turns out to launch a new product, you need both. Our company is Keil Innovations, LLC (that’s my maiden name)  and it’s woman and veteran owned.

At UCSD, I had posted an ad on Craigslist for a roommate. He showed up on my doorstep and we had an awesome conversation. The next day, he told his buddies that he was sure he had a roommate or a date. It turns out, he got both. We married in 2010, and we now have an amazing 3-year-old son who has been a part of this entire journey. He’s featured on our Kickstarter
video, whacking flies.

JD: Dennis and I were eating lunch. It was a hot summer day and we had left our kitchen door open. As we sat at our table, we noticed a fly had come in and landed on our garbage can. We
watched it struggle for 10 minutes to get inside. We’re not even sure which one of us suggested it but one of us said, “We should drill a hole in the lid and let it in, but place a trap under the lid.” Almost immediately, Dennis set out to make a prototype, and only 10 minutes after he installed it we had caught our first fly!

EGT: Tell us about not having to touch the flies to dispose of them.

JD: One of the great design features of the Garbage Can Fly Trap is that it requires no additional bait. It uses the fly’s natural attraction to your garbage as bait. House flies and fruit flies land on  the lid of your garbage can, trying to get in. They walk into the trap and then down, where they are trapped in a flypaper-lined cartridge. When you are ready to throw out the cartridge, simply push the quick-release button on the lid and the cartridge falls directly into the trash—so there’s nothing disgusting to touch or to look at.

EGT: How did you create your first prototype?
JD: Warning: Flies were injured in the making of this gadget!

Dennis bought a hose adapter, a small section of hose and some flypaper. He drilled a hole in the lid of our kitchen garbage can (after asking for my permission, of course). He installed the fixture and attached the flypaper-lined hose under the lid. This created an access point for the flies to enter. We returned shortly thereafter to see our first fly trapped in the flypaper.

Initially we were catching one to three flies per day so we left our doors open, which people with kids and dogs tend to do. We caught 10-13 flies per day. Dennis then had the idea to put the
trap on our curbside garbage can to really do some damage, and he caught 68 flies in one afternoon!

We also noticed we were catching a lot of fruit flies. The trap can be installed in almost any household container. We baited these traps with fruit scraps in the beginning but found that wine
or red wine vinegar was what the fruit flies like best. Our record so far is 200 fruit flies in two days.

EGT: What about the patent process?

JD: The patent process has been complicated, expensive and time-consuming. We have three patent applications filed: one utility and two provisional. We recently filed the PCT (International
Patent) to allow us to file internationally. We also have filed a patent application in China.

EGT: Who designed your packaging?
JD: We used an internet site that allowed us to hold a contest for logo ideas and awarded a cash prize to the winner. We received over 40 unique designs in less than one week. We took our favorite
design and hired a local graphic designer to help us create the packaging. What we’ve learned is that your packaging will continue to evolve.

EGT: How did your link to a factory in China come about?
JD: We were in the process of getting quotes from manufacturers in the U.S., China and Mexico, where Dennis toured some facilities.

We had been in the local news, and a UCSD student saw one of our interviews and reached out to us. She was from China, and her parents have been manufacturing plasticinjection molded products for 30 years. Her mom handles the business side; her dad is an engineer. Sound familiar? We had an initial meeting with them in San Diego, and it was clear that they were a very capable manufacturer.

Dennis, Dakota and I traveled to China in May to tour their factory and see the first traps come out of the mold. We can’t imagine having had a better experience.

EGT: Tell us about your Kickstarter campaign.
JD: Our product is relatively inexpensive, so we knew raising 100 percent of the money needed to bring it to market on Kickstarter would be challenging. It typically takes $60,000-$80,000 to bring a new product to market. Therefore, we used Kickstarter to test market viability (raising $12,903, surpassing the project’s $10,000 goal), which gave us the confidence to continue investing
our own time and money. We presold 500 traps and 3,000 cartridges to backers from more than 20 countries.

EGT: Now that you’ve received your first shipment, what is your marketing plan?
JD: We launched our website using Shopify. We are reaching out to the local media that featured us last summer. We are setting up the product on Amazon as well as through its new Launchpad program, which is offered to Kickstarter projects. Our local Ace Hardware store is also selling the traps, and we’re approaching other retailers.

EGT: What is the price? How many pieces per package?
JD: Unit 1: 1 Trap + 2 Replacement Cartridges, Retail: $14.95. Unit 2: 4-Pack Replacement Cartridges, Retail: $9.95. The replacement cartridges hold over 100 house flies or 400-plus fruit flies (yes, Dennis counted them) and last 2-8 weeks in your kitchen. We also have a trap outside on our curbside container. They’re great on compost or pet waste containers as well.

EGT: Any plans for other products?
JD: Installation takes about three seconds but involves drilling a hole. Personally, I think the Garbage Can Fly Trap would have a more mass appeal if we partnered with a garbage can manufacturer to mold the trap directly into the lid. We see this as a future product offering.

We are also sourcing a small container with the trap integrated into it so that the consumer can set it on a kitchen counter specifically for fruit flies. We’ve also developed a commercial version using the same concept; flies are attracted to the food in a Dumpster. Dennis developed a 3D-printed prototype, tested it with local restaurant owners and caught as many as 400 flies in
one day.

EGT: Do you have any advice for novice inventors?
JD: Kickstarter is a long, challenging road (with a success rate of  about 40 percent). Of those that fund, there are many entrepreneurs who never succeed in bringing their product to market. Seek
guidance from those who have been there before. We worked with the San Diego Inventors Club out of 3rd Space. They provided mentors who had been through the Kickstarter process.