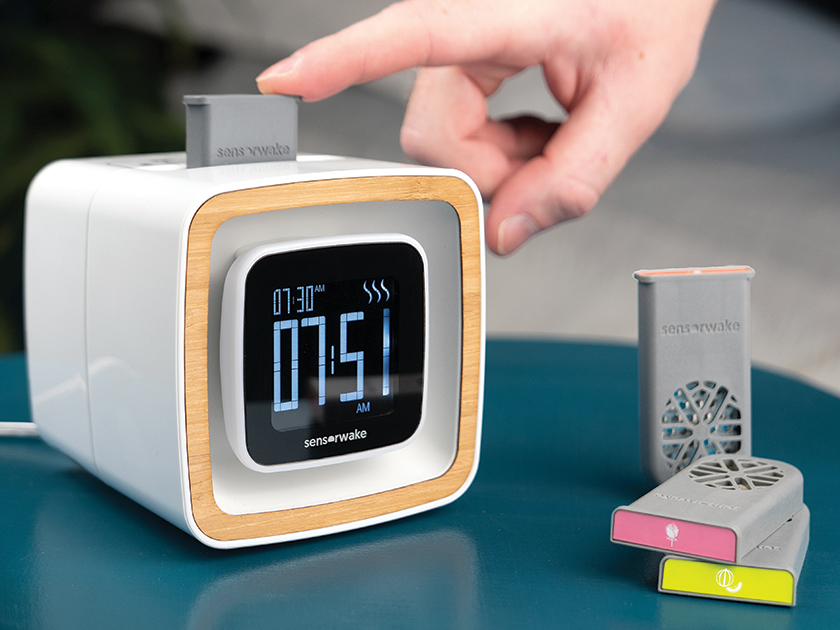 Alarm clock emits a soothing aroma instead of a sound

The Google Science Fair “allowed me to launch my product in the market and to make my dream a reality.”

Constantly tired by his schoolwork and studying, 18-year-old Parisian student Guillaume Rolland found it difficult to wake up in the morning. Then he had his ooh la la moment.

He realized that if someone made coffee before he woke up, the strong smell from the brew was enough to rouse him gently from his sleep. That led him to think that an alarm clock would be much more effective if it emitted scent instead of sound.

Rolland started working on a prototype right away. In just a few days, he had built the first Sensorwake olfactory alarm clock.

The latest version of the Sensorwake is called the Trio, which features scent pods that release pleasing aromas into the air at your desired waking time. The alarm also has dynamic lighting and music to appeal to three senses; hence the name Trio.

The device can be set similarly to a standard alarm clock. There are nine main different scent cartridges available to customize the user’s experience, with many more available.

Rolland constructed that first prototype clock from an Arduino and found materials.

“I used an Arduino Uno because it’s very easy to use,” he says. “As an 18-year-old, I did not have any skills in electronic development. I connected electronic components from old cars, toys and Christmas gifts.”

The first fragrance pod was made from essential oils distilled in his high school, via ingredients from his garden. The prototype was the perfect test bed for the concept.

The first big break for Sensorwake came soon after building the first prototype. Rolland found out about the Google Science Fair, a worldwide competition for inventors.

He entered his crude prototype but did not expect that it would lead anywhere. To his surprise, he was chosen as a finalist and was the first French based inventor so honored.

Although the competition offered no cash prize, Rolland had the opportunity to visit Google’s offices in California. He received mentorship and great PR, a major validation for the concept.

“I consider the Google Science Fair as a trigger in the project. It allowed me to launch my product in the market and to make my dream a reality,” he says.

In 2015, Rolland launched the first Sensorwake on Kickstarter and raised more than $244,000. This allowed him to add people to the team and push towards manufacturing.

The buzz around the project helped lead to a partnership with Givaudan—a well-known, Switzerland-based fragrance and flavoring company that helped Rolland develop the scent release pods used in the manufactured device.

Rolland is no stranger to creating patented devices; he filed his first patent at 13 for a tea brewing robot. The IP strategy for Sensorwake started with a French patent. As the company grew, additional patents were filed to give the company worldwide coverage on its technology and trademarks. Procuring IP has helped with marketing and building valuable assets.

The Sensorwake devices are manufactured in China. Rolland traveled to the factories and met with many potential manufacturing partners.

Fortunately, the pre-sales from his first Kickstarter campaign bolstered his initial order quantity and made the product more appealing to take on for reputable factories. It was intimidating for a young entrepreneur to open tooling for a brand-new hardware product, but the risk paid dividends.

Leveraging the success of the first generation of product, Rolland and his team overhauled the design. Dubbed the Trio, the new device added pleasing light patterns as well as relaxing music to the waking experience.

Designed with U.S. consumers in mind, the Trio was launched on Kickstarter last year and raised more than $200,000. The first units were shipped to crowdfunding Rewards backers early this year.

All of the great work by Rolland and the Sensorwake team has led to a number of honors, including two Consumer Electronics Show Innovation awards. However, their biggest achievement is the recent acquisition of the company by Maison Berger Paris. The acquisition by the 120-year-old French fragrance company gives Rolland and his team additional resources and the challenge to build new fragrance delivery devices to be launched in coming years.