Would Monopoly Be Denied a Patent if it Was New? 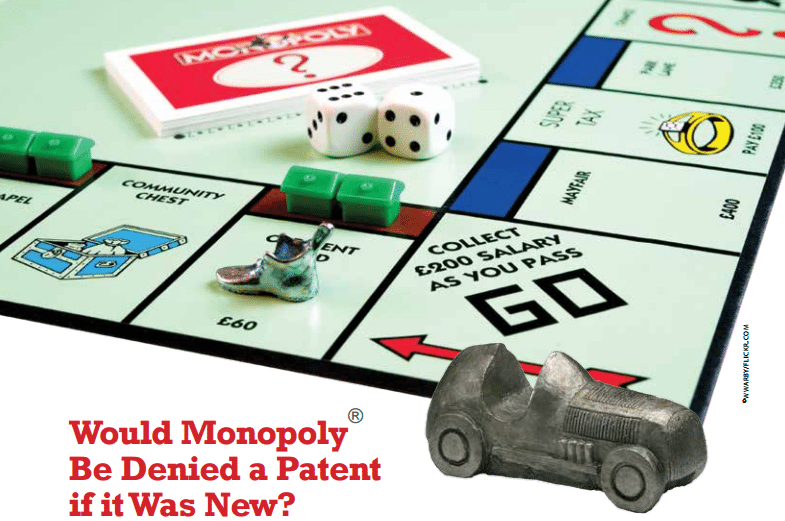 After all, some Federal Circuit Judges say rules of game play are abstract ideas.

The application of the Supreme Court’s 2014 decision in Alice v. CLS Bank by the United States Court of Appeals for the Federal Circuit has been disappointing, to say the least. There have been some rays of hope for innovators with decisions in DDR Holdings, Enfish and BASCOM, but these bright spots shine so radiantly because they are scattered in a sea of despair. Whether or not the Supreme Court intended to kill software patents, the way the federal circuit, Patent Trial and Appeal Board and many patent examiners have applied Alice is to render much software patent ineligible in the United States.

One particularly disconcerting and largely unpredictable aspect of Alice is how it has been used to render games patent ineligible.

The United States Patent and Trademark Office has long issued patents for new games using conventional equipment (e.g., balls, clubs, cards, etc.) where the invention lies in the steps of the game. For example, in 1935 the USPTO issued U.S. Patent No. 2,026,082 on Monopoly® and has had gaming art units and classifications for decades.

Given the way Alice is being interpreted by both patent examiners and some of the judges on the federal circuit, one has to ask whether games are patent eligible any more. Could Monopoly be
patented if it were newly invented in 2016? According to at least some federal circuit judges, rules of game play are abstract ideas. But how can something be abstract when it is defined with enough specificity to allow average citizens to enjoy countless hours of enjoyment? What exactly is abstract about a game, or the rules of a game? Absolutely nothing. Monopoly is not the only successfully patented game, although it may be the most famous patented game. Still, in the field of card games, the USPTO has long issued patents for entirely new games, improvements to existing games and new betting options and/or payouts for existing games, all using conventional playing cards. See U.S. Patent No. 5,823,873 (improved poker game using conventional
cards commercialized as Triple Play Draw Poker®); U.S. Patent No. 5,154,429 (method of modified blackjack using conventional cards). There have also been many success stories of inventors
commercializing or licensing patented new games.

Notwithstanding, in March the federal circuit issued a curious and highly questionable decision in In re Smith, which incorrectly expands the “abstract idea” test of Alice well beyond where the test was ever envisioned. The panel decision extended the Alice reach to claims directed to performing a novel and non-obvious underlying practice that did not previously exist (steps of a new game) with known manufactures (cards).

The ruling in In re Smith is wrong because a process that did not previously exist cannot qualify as an “abstract idea” under Step 1 of the Alice test. Furthermore, although we have not been told the definition of what it means to be “abstract” or for an idea to be an “abstract idea,” those terms logically cannot be said to apply to a novel and non-obvious process. A process that has never
existed and is thoroughly described must logically transform an otherwise “abstract idea” into eligible subject matter under Step 2 of the Alice test.

Under the statute, new processes that use conventional equipment or materials are clearly patent-eligible subject matter. See 35 U.S.C. Section 100(b), which says that patent-eligible processes
include “a new use of a known process, machine, manufacture, composition of matter, or material.” The Supreme Court has never abrogated Section 100(b), so it should be applied rather than ignored as if it doesn’t exist.

Regarding the game in In re Smith, it was undisputed that the claimed combination of game steps is new, as the USPTO found that the applicant overcame all Section 102 and 103 rejections based
on the recited combination of such steps.

To fail the first step of the Alice test, a claim needs to tie up an “abstract idea,” which for purposes of this test was defined to be a preexisting practice that serves as a fundamental “building block of human ingenuity” such as a “longstanding” and “prevalent” economic practice. In conflict with the statute and the Supreme Court’s reasoning, the federal circuit panel in In re Smith applied the Alice test to claims that indisputably recite a new set of game steps that was not preexisting, let alone “fundamental.” The inventiveness of the claims was based on the previously unknown combination of game steps, not the cards.

Left uncorrected, the panel’s decision will be applied by patent examiners, the PTAB and district courts to create an improper categorical ban against patents claiming new games or similar inventive practices using conventional equipment. Such a categorical ban is contrary to the statute, controlling precedent and the USPTO’s own long history of granting patents on inventive practices using known equipment, including numerous game patents.

This type of Alice-creep is particularly disconcerting because it ignores the primary concern of the Supreme Court in Mayo. Much of the 101 patent eligibility mischief we now experience can be
traced back directly to Mayo v. Prometheus, in which the Supreme Court ruled that conventional steps are not enough to transform a law of nature into a patent-eligible process. Although that decision clearly violates the statute, as well as directly overrules Diamond v. Diehr, the concern of the Supreme Court was undeniably and explicitly the additional of conventional steps.

In this case, the USPTO found the claimed combination of gaming steps was not preexisting. The patent examiner rejected the claims as being abstract because they were “an attempt to claim a new set of rules for playing a card game.” If the claims were a new set of rules, that means the steps could not possibly be conventional. If the steps were not conventional, then Mayo shouldn’t apply at all. Given that the Alice framework is really the Mayo framework applied to abstract ideas instead of laws of nature, why should Alice ever be used to deal with a process that a patent examiner acknowledges is new, non-obvious and appropriately described?

It is difficult to understand how something that is described with enough specificity to satisfy 35 U.S.C. 112, which is also new and non-obvious, could ever be considered abstract. Of course, such an irrational conclusion can be achieved because the Supreme Court and federal circuit have stubbornly refused to define the term “abstract idea.”

How can you have a legal test that is applied to refuse property rights to applicants and to strip property rights from property owners, in which the critical term is intentionally left amorphous and undefined? Not defining the term “abstract idea” and yet applying it in the patent-eligibility context goes against everything the law is supposed to stand for: certainty, predictability and fairness.

It is well past time to define the term “abstract” so the law has meaning and those subject to the whimsical fancy of the current system can be spared. It is time for the innovators and the rest of the patent community to be informed as to the standards that will be applied.

The term “abstract” is defined as “being apart from concrete realities, specific objects, or actual instances.” Defining the term “abstract” in this common-sense, everyday way makes it is easy to understand that when an application has specifically defined the invention with enough specificity to satisfy 35 U.S.C. 112, the claimed invention cannot possibly be abstract.

It seems clear that with the right federal circuit panel (or wrong panel, depending upon your viewpoint), Monopoly would be patent ineligible because it is nothing more than an abstract idea. Of
course, some would have you believe that the presence of a board and pieces would somehow transform the rules of playing the game into something that is not abstract. However, the Supreme
Court’s decision in Bilski v. Kappos overturned the so-called Machine or Transformation test and said that it is possible for methods to be patent eligible without being tethered to some tangible physical apparatus or device. I find it impossible to believe that the Supreme Court intended Alice to rewrite generations of patent law applicable to the patentability of games, which were not at issue in that case.