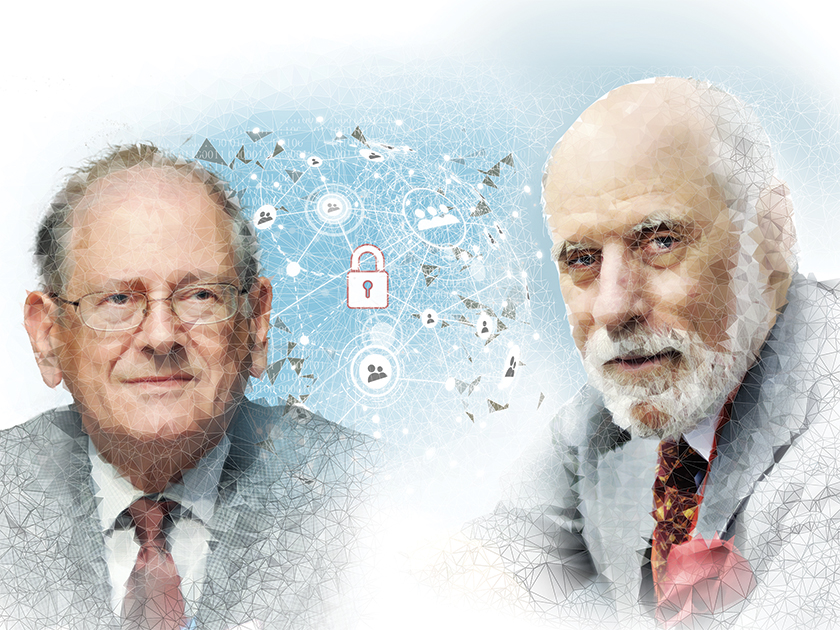 Vinton Cerf and Robert Kahn have always been generous in acknowledging the contributions of others to the beginning of the internet. So if they are the Fathers of the Internet, Nikola Tesla may be the grandfather.

For the many who claim that Tesla is one of history’s most unheralded inventors, here’s more: He experimented with the notion of a “world wireless system” in the early 1900s. As was often the case, he was well ahead of his time; it would be more than a half-century before the technology to build the internet came into being.

In the early 1960s, MIT’s J.C.R. Licklider—a member of the Internet Hall of Fame—formulated ideas for an intergalactic network of computers. Soon after, the Advanced Research Projects Agency Network (ARPANET), first funded by the U.S. Department of Defense, used a process called packet switching that allowed multiple computers to communicate on a single network.

Some more alphabet soup proved an essential ingredient in the internet recipe in the early 1970s. Computer scientists Cerf and Kahn developed Transmission Control Protocol and Internet Protocol (TCP/IP), setting the standard for how data could be transmitted between multiple networks so they could “talk” to one another.

ARPANET adopted TCP/IP on the first day of 1983. This paved the way for the network highway that became the internet, with Cerf and Kahn generally recognized as the revolutionary medium’s primary inventors.

Cerf, who turns 75 this month, says the development of the internet was a team effort involving tens of thousands of people. Those origins have been widely chronicled.

But earlier this year, he revealed that the original internet had two major flaws.

According to Business Insider, Cerf “basically didn’t set aside enough room to handle all the devices that would eventually be connected to it. Perhaps even more troubling, he and his collaborators didn’t build into the network a way of securing data that was transmitted over it.”

The space problem was understandable. When Cerf was designing the system in the early 1970s, he provided for a 32-bit addressing system that could support up to 4.3 billion devices—larger than the world’s human population at the time. How could he fathom that this would not be enough?

But by the 1990s and early 2000s, it was obvious that Cerf and other internet experts would have to update the protocols to make way for new devices that were connecting to the network.

The other flaw was security. As he rushed to get the internet launched, Cerf overlooked the fact that transmissions could potentially be read by anyone who intercepted them. There was also no way for a network to verify that a user or device was who or what it claimed to be.

Ironically, a popular security technology called public-key encryption was developed in the mid-1970s—around the time that Cerf was formulating the protocols underlying the network. But he was too hell-bent on finalizing the protocols.

Still, more than 40 years later, Cerf told Business Insider that it wouldn’t have been a good idea to build security into the internet when it launched because most of its users were college students who couldn’t be bothered with conceiving and remembering passwords.

Kahn was working for the Department of Defense when he collaborated with Cerf, a Stanford professor, in the 1970s. Now 80, he is chairman, CEO and president of the Corporation for National Research Initiatives (CNRI), which he founded in 1986 after 13 years with the U.S. Defense Advanced Research Projects Agency (DARPA). When Cerf joined DARPA, Kahn was its director.

As technology improved throughout the decade, and because the internet mission was then a government enterprise, funding was an issue. According to (ironically) an internet bio on Kahn, the industry received “massive support from the Reagan Administration and private sector for the development of the internet.”

Momentum grew for development of the internet during the latter part of the 1980s, and by 1990 the private sector had donated more than $500 million to the cause—a groundswell that made the front page of the New York Times.

Kahn and others worked with AT&T toward a signature stroke in the process, the world’s first internet browser and ATM, in 1990. Email and internet access were the catalysts for the phenomenon.

With complex rules and protocols now in place, Timothy John Berners-Lee invented the World Wide Web 30 years ago. The British scientist developed a system that could view web pages (hypertext documents) through the internet.

The Internet Hall of Fame refers to the World Wide Web as “an Internet-based hypermedia initiative for global information.” However, when it was conceived, the web’s target was anything but global. According to CERN, the European Particle Physics Laboratory where Berners-Lee worked, it was meant to “meet the demand for automated information-sharing between scientists in universities and institutes around the world.”

Berners-Lee wrote the first web client and server in 1990. He created specifications of URIs, HTTP and HTML that were later refined.

Some have even referred to him as the Father of the Internet, but its  true patriarchs will forever be identified as Cerf and Kahn.

We told you three years ago, but for those of you who missed it we’re telling you again. Al Gore never said he invented the internet.

Gore’s claim in a 1999 interview was that “during my service in the United States Congress, I took the initiative in creating the internet.” The then-vice president was referring to his overseeing organized efforts that led to the internet.

Even had Gore said he invented the internet, he wouldn’t have been far off.  Vinton Cerf said: “The internet would not be where it is in the United States without the strong support given to it and related research areas by the vice president in his current role and in his earlier role as senator …

“As far back as the 1970s, Congressman Gore promoted the idea of high-speed telecommunications as an engine for both economic growth and the improvement of our educational system. He was the first elected official to grasp the potential of computer communications to have a broader impact than just improving the conduct of science and scholarship…

“His initiatives led directly to the commercialization of the internet. So he really does deserve credit.”