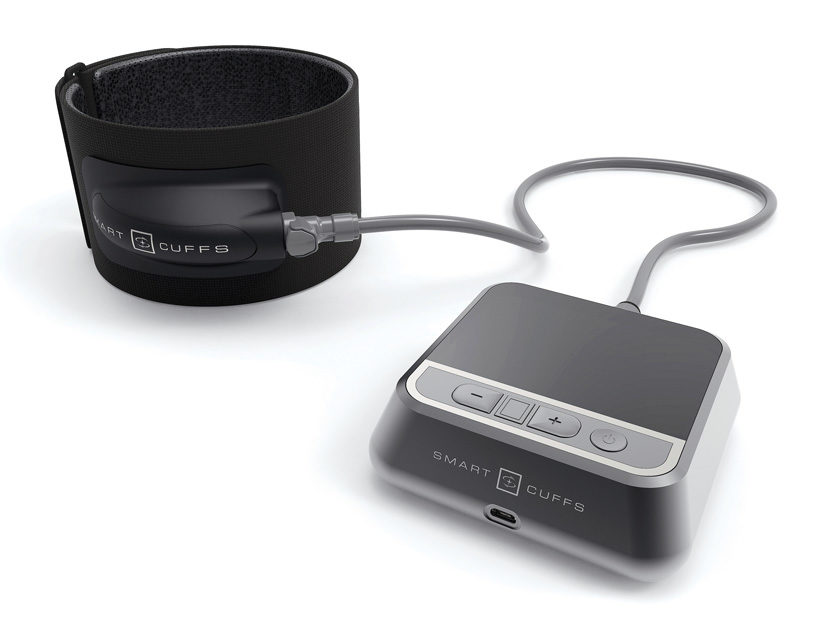 Nick Colosi set out to create a safe and cost-effective BFRT product to help trainers and individuals use the technique safely and effectively.

Few people would say they were fortunate to develop golfer’s elbow, but Nick Colosi could make that claim.

While studying to become a doctor of chiropractic early last decade, the North Royalton, Ohio, native noticed the injury and tried manual therapy to no avail. Then an intern at the student clinic treated him with a technique called Instrument Assisted Soft Tissue Mobilisation, and Colosi’s condition resolved within a week.

He wanted to learn more about IASTM but found he would have to pay close to $3,000 for the education and tool combination. He sought a more affordable solution.

Colosi turned to his father and uncle, who had a combined 60 years’ experience in the steel industry. Together, they designed what became a line of stainless steel IASTM products—high quality and about one-third the cost of other solutions.

The products were a success. In 2014 they launched a company, Smart Tools, in Strongsville, Ohio, to manufacture and produce the IASTM tool designs.

BFRT is an alternative to cumbersome and heavy weights that can put added strain on joints during a workout. It uses resistance bands to decrease blood flow of an extremity to trick muscles into thinking they are under greater load than they are.

“With fad products, it usually goes viral—then science catches up and debunks the theories,” Colosi told Forbes in a February interview. “So far, we have found (BFRT) is the opposite: The science came first. …

“There are always things we are learning, but what we know is it does improve muscle size and load.”

The technique has proven effective, but it can be difficult to do safely because there is risk of restricting the blood flow too much and causing unintended damage to muscles by starving them of oxygen. Colosi also cautions that everyone should consult a physician before starting resistance training, and that pregnant women or people with a history of blood clots should not try it.

He found BFRT products were available in the market but cost thousands of dollars, making them largely inaccessible to the masses. So Colosi set out to create a safe and cost-effective BFRT product. He created Smart Cuffs in 2018 to help trainers and individuals use the technique safely and effectively.

Colosi wanted to make the product smarter and easier to use, so he started work on an automatic model. “This is sorely needed in the marketplace—to have an automated unit to automatically measure LOP but to maintain affordability,” he says.

The Generation 3 device, strapped to the upper arm or thigh, features an electric pump and integral doppler system that monitors and sets the desired limb occlusion pressure (LOP). The system monitors conditions during a workout in real time and has a smart valve that opens to relieve pressure if LOP gets to unsafe levels. It’s also more durable and able to withstand the rigors of use in a home or gym setting.

The target market ranges from physical therapists working with clients to trainers for professional athletes.

The Generation 3 model will be released in July. The consumer version will cost $299-$399 and the professional version $995-$1,500, depending on the chosen options.

Colosi found an Ohio-based engineering team to help with the development and prototyping. He was able to keep the production of the product entirely in the United States, with manufacturers from the Pacific Northwest and Colorado providing components that are assembled in Ohio.

The technology behind Smart Cuffs is patent pending, but developing IP is a small part of the overall business strategy.

Colosi says he is more concerned with creating great products and that intellectual property is a natural byproduct of that activity. He says the IP is less about corporate valuation and more about giving him the legal space to sell his products.

The Gen 3 Smart Cuffs set was officially launched at the annual Consumer Electronics Show this past January. It was as well received there as it has been by the general public; Colosi says Smart Tools has gone from selling about 20,000 cuffs last year to twice that many.

“As the fitness industry continues to grow rapidly, so does the demand for new and innovative training tools,” he said at CES. “We see tremendous value in introducing these consumer-friendly cuffs to the public and are excited to expand the reach of BFR beyond clinical and educate the fitness community on the safety and benefits of this technique.”

Colosi demonstrated his prototype at the show and will have a more formal launch at the National Athletic Trainers Association show in June with production units.

The product is available for pre-sale on the company website. Colosi is already starting design work on Generation 4.