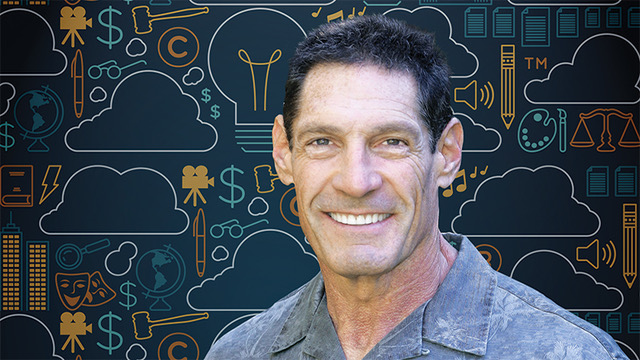 Another mission for Dr. Gary Michelson: His institute that educates about intellectual property

“With IP-protected innovation now the principal driver of corporate value as well as national economic growth, intellectual property has become vitally important to all Americans …”

Dr. Gary Michelson has wanted to help people for as long as he can remember, which includes a time he would like to forget.

He recalls sitting at his grandmother’s kitchen table as a 7-year-old and smelling her skin burning on the stove. She suffered from syringomyelia, a crippling spinal disease that causes the loss of sensation to pain and temperature in the extremities, especially the hands.

The boy saw the flames passing through her fingers. He screamed, and she quickly doused her hand under the faucet. “One day you’ll become a doctor and you’ll fix me,” she told him.

This unforgettable anecdote is from the book published by the billionaire inventor and spinal surgeon, “The Intangible Advantage: Understanding Intellectual Property in the New Economy (2016).”

Billed as the first IP book for everyday people, it is part of a larger philanthropic mission: the Michelson 20MM Foundation, which supports innovation in education and higher learning initiatives. The Michelson Institute for Intellectual Property, an initiative of Michelson 20MM, attempts to arm educators and the innovation arena with the tools to educate everyone about IP.

“I did not start out to be an inventor,” Dr. Michelson says in the book. “I wanted to be a doctor.”

Improving people’s quality of life and giving back are second nature to him. Born and raised in Philadelphia, he worked to put himself through college and medical school.

From the outset of his medical career, he worked to improve the unreliability and low success rates of spinal surgeries. Dr. Michelson spent the next 20 years developing new implants, surgical procedures, and the instruments needed for those procedures.

“Michelson tools” and procedures resulted in diminished blood loss, pain, disability, and recovery time associated with previous procedures. These new processes require minimal hospital time; many of them can be done on an outpatient basis. The likelihood of success for these newer procedures has been consistently high, with substantially times for return to full activity.

Throughout the world, Dr. Michelson’s procedures have become the most dominant means of treating common spinal disorders, as well as those which are the most debilitating. He is the sole named inventor of more than 950 issued patents or pending applications throughout the world, and has the rare distinction of being inducted into both the National Inventors Hall of Fame (2011) and the National Academy of Inventors (2014).

In 2005, medical device company Medtronic purchased the majority of Dr. Michelson’s patent portfolio of spinal surgery inventions for $1.35 billion. Before and since, he has devoted much of his life to sharing his wealth to benefit others. His philanthropic work includes:

A book for all

The grantmaking Michelson 20MM (20 Million Minds) Foundation and Michelson Institute for Intellectual Property continue this long track record of giving back. “The Intangible Advantage” is the institute’s primary education resource.

“Any person today who does not understand at least the basics of intellectual property—and its value and role in science, business, arts, and the professions—will find him or herself at a distinct disadvantage in the world of tomorrow,” Dr. Michelson wrote.

“A book that explains the complex workings of patent, copyright, trademark and trade secret law in popular, non-legalese prose—especially one largely written by a non-lawyer (albeit a recognized expert in the field)— needs careful vetting. For our “peer-reviews,” we relied on the advice and counsel of a number of leading IP academics and practitioners, five of whom stand out most strongly for their contributions.”

Dr. Michelson’s desire to educate the public about intellectual property—and its importance—stems from a deep firsthand understanding of the importance of patents.

“Surgeons began asking me to provide them with a set of tools of their own,” he says in the preface to his book. “I said sure, and for each request, I would ask my machinist to fabricate another set of tools. Finally, the machinist told me that it would be cheaper just to make a hundred sets at once, since the major cost of fabricating the tools was in setting up the jigs on the machine.

“I thought that made perfect sense. After all, the demand for the tools from other surgeons was growing. In addition, I was disgruntled enough with the standard of care in other areas of spinal treatment that I had already invented several other new spinal surgery tools. So I started a little company to sell my tools and devices.

“I quickly realized, of course, that I needed to patent my inventions to protect all the time, money, and effort that I had invested to develop them.

“After all, if you don’t patent your inventions, especially in a competitive industry like medical devices, others will simply copy those inventions with impunity and sell them at a lower cost because they didn’t have to invest anything to develop them in the first place. That’s a great way to drive the innovators out of any industry and halt any further technical advances in that field.”

On a larger scale, Dr. Michelson sees the growing import of IP in a rapidly evolving business landscape. “Up to now, intellectual property has been taught only in law schools (or the occasional business school seminar),” he wrote in a 2017 op-ed piece on The Hill.

“But over the last 50 years, IP has grown from a narrowly specialized legal field into a major force in American social and economic life. With IP-protected innovation now the principal driver of corporate value as well as national economic growth, intellectual property has become vitally important to all Americans, not just those in the legal profession. …

“While wireless markets are won and lost in corporate ‘patent wars,’ the victors in tomorrow’s driverless car business may be decided by today’s Google trade secret lawsuit against Uber. In the biotech sector, billions of dollars in investments hinge on Supreme Court patent decisions and proposed new IP legislation.

“As for the music industry, it’s still trying to figure out what the $7 million 2015 copyright infringement verdict against Robin Thicke and Pharrell Williams for borrowing merely the “themes” of soul singer Marvin Gaye’s work means for their creative options.”

The doctor noticed a story about Santa Ana (California) College, where students who got a B or better average in their first year didn’t come back for the second year was because they couldn’t afford the books. He also read that the community college’s teachers agreed to give $500 each to help these students buy books and finish their studies. Dr. Michelson spent $50,000 to fully fund the project.

“I felt bad about it because I didn’t feel it was nearly enough. It was just a temporary fix for one of 112 community colleges in California,” he told CSQ magazine.

So he started Michelson 20MM, with a first initiative to create a library of “super-high quality, open-license, freely downloadable, interactive college textbooks.” That library of free open textbooks now houses a collection of 30 books in use by more than 6 million students.

Michelson 20MM also founded the first philanthropic higher education accelerator focused on social impact investing. Its ultimate goal is to connect institutions, innovators and policymakers solving the most pressing issues in postsecondary and vocational education so that students worldwide have access to an affordable, equitable, and high-quality education.

In March, Michelson 20MM announced The Michelson Spark Grants program, which truncates the grant-awarding process by committing to respond to applicants within 15 business days.

This all comports with the mind-set of an innovator. “Inventors are constantly finding out what’s wrong with the world and saying, “I wanna go fix that,’” Dr. Michelson says.

The Michelson Institute for Intellectual Property, an initiative of the Michelson 20MM Foundation, addresses critical gaps in intellectual property education to empower the next generation of inventors. Michelson 20MM was founded thanks to the generous support of renowned spinal surgeon Dr. Gary K. Michelson and Alya Michelson. To learn more, visit 20mm.org.