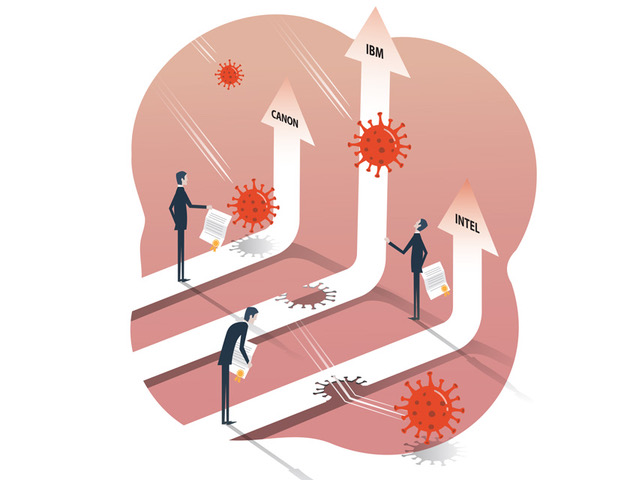 The true impacts of COVID-19 on patent filing applications might become clearer in late 2021 or perhaps even beyond.

*All Eye on Washington stories initially appeared on IPWatchdog.com.

Patent application filing activity increased slightly in the United States during 2020, despite the upheaval caused by the COVID-19 pandemic.

That is the finding in a study released January 12 by patent database provider IFI Claims Patent Services, which also published its Top 50 U.S. patent grant recipient list for 2020 and its Global 250 list of top owners of active patent assets worldwide.

Despite the increase in patents filed, patent grants by the USPTO decreased by less than 1 percent—down to 352,013 issued patents during 2020. However, that’s only a slight reduction from the record number of patents issued in 2019 (354,428 issued patents) and the largest total for any single year excluding 2019.

The Top 50 list includes many of the usual companies among top patent filing organizations including International Business Machines (IBM), which took the No. 1 spot among all firms receiving U.S. patents for the 28th year in a row.

Each of the top five patent recipients showed a decrease in patent grants year-over-year. Canon suffered the largest decline at 9 percent.

The companies with the greatest percentage increases were 24th-ranked Kia Motors, up 44 percent to 1,323 issued patents, and 32nd-ranked Sharp Corp., up 27 percent to 1,042.

Though these patent issuance numbers are seemingly robust given the state of the world economy and many research and development activities during the COVID-19 pandemic, IFI Claims CEO Mike Baycroft said it would take some time before the true impact of COVID-19 on global R&D activities could be measured in terms of impacts to patent filings.

“U.S. applications are published 18 months after they’re originally filed,” Baycroft said, “and most of the recent patent application growth predates the pandemic.” The true impacts of COVID-19 on patent filing applications might therefore become clearer in late 2021 or perhaps even beyond.

IFI Claims also offers a survey of the 10 fastest-growing areas of technology. That is led by computer systems based on biological models, which experienced a compound annual growth rate (CAGR) of 67.28 percent between 2016 and 2020.

This area, which covers an array of artificial intelligence and neural network technologies, was led by IBM with 2,789 patent applications during the five-year period. Next were Google (1,451), Samsung Electronics (1,253), Intel (1,102) and Microsoft (1,044).

Patent eligibility issues are likely much less of a threat to the second-fastest growing technology sector, electrical smoking devices (55.08 percent CAGR from 2016 to 2020).

Philip Morris maintained a sizable lead during the five-year study period, filing 1,688 patent applications in this sector—more than twice the amount filed by second-place Altria (701). Next were RAI Strategic Holdings (658), Nicoventures Holding (483) and British American Tobacco (474).

Baycroft said this is a fascinating area. “It always surprises me to see sectors which may be covered by much smaller patent portfolios, but there’s clearly a lot of activity going on,” he said.

IFI Claims’ Top 250 Global list reports that although IBM is the clear leader in number of patent application filings and issued patents, Samsung Electronics has a massive lead in terms of ownership of current active patent assets worldwide.

Unlike the Top 50 list, which looks at the name of the assignee at the time of a patent’s issuance, the Global 250 list looks at which company actually owns the patent and also aggregates subsidiary patent holdings within the parent company. That’s why Samsung is a perennial runner-up to IBM in the Top 50 listings yet tops the Global 250 list with twice as many active patent families (80,577 to 38,541).

IBM’s active patent family ownership has been reduced over the years by major deals, such as the 2014 sale of the company’s chip business to GlobalFoundries.